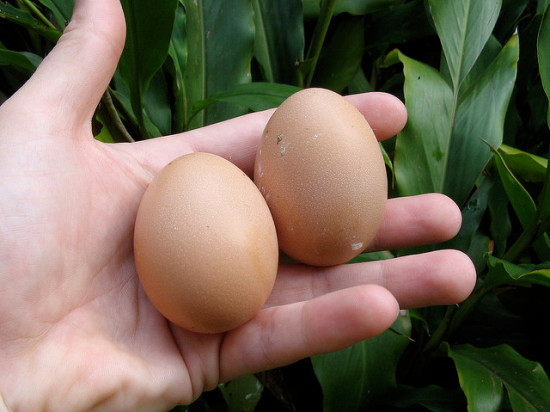 If the recent outbreak of salmonella in U.S. supermarket eggs is any indication, food borne pathogens are not going away. In fact, they are increasing in number at an alarming rate. Yet I’m not afraid of contracting salmonella from my eggs. In fact, I eat them raw.

Am I stupid? Do I have a death wish? Nah. I just know my farmer.

You see, the “family farm” where these contaminated eggs originated is huge. According to the New York Times,

The DeCosters produce 2.3 million dozen eggs a week (!) in Iowa. Over the years, many here have objected to the growing operations of Austin J. DeCoster. Neighbors sued the DeCosters’ farms for what they said were noxious gases, millions of gallons of uncovered manure and putrid animal carcasses left on roadways. The Iowa Department of Natural Resources declared Mr. DeCoster a “habitual violator,” making his the only operation ever to be deemed such in Iowa, for its handling of hog waste.

It’s only common sense that chickens raised in such massive operations will produce and spread pathogens like salmonella. Of course contaminated fecal matter will spread more readily among 100,000 confined birds jammed into tiny cages (or even so-called “cage-free”, yet crowded spaces) than it will among birds roaming freely on pasture. Of course hens living in close contact with out-of-control rodent populations (which carry salmonella) will be more diseased than chickens living outside. Of course de-beaked and force-molted chickens will be more prone to disease than those that peck, build nests, exhibit their natural chicken-y behavior, and get regular exposure to sunlight (aka: Nature’s disinfectant).

This editorial from the New York Times summarizes the scope of the DeCoster operation this way:

It wasn’t simply that the operation is out of scale with the Iowa landscape. It is out of scale with any landscape, except perhaps the industrial districts of Los Angeles County. What shocked me most was the thought that this is where the logic of industrial farming gets us. Instead of people on the land, committed to the welfare of the agricultural enterprise and the resources that make it possible, there was this horror — a place where millions of chickens are crowded in tiny cages and hundreds of laborers work in dire conditions.

Thankfully, I don’t buy eggs from this kind of mammoth, disease-spreading system. I buy eggs from a local farmer just down the street. His hens are out to pasture with his cows. They eat grass, bugs, and larvae. Their diet isn’t even supplemented with feed. They get sun. It’s what’s called a pastured poultry operation, and you should try to find one near you, too.

Of such operations, Joel Salatin wrote:

So far, not one case of food-borne pathogens has been reported among the thousands of pastured poultry producers, many of whom have voluntarily had their birds analyzed. Routinely, these home-dressed birds, which have not been treated with chlorine to disinfect them, show numbers far below industry comparisons. At Polyface, we even tested our manure and found that it contained no salmonella.

Pastured poultry farms exhibit trademark lush pastures and healthy chickens with deep-colored egg yolks and fat. As with any movement, some practitioners are excellent and others are charlatans. Knowing your product by putting as much attention on food sourcing as you do on planning your next vacation is the way to insure accountability.

Want to know how to prioritize your egg purchases? Check out this article on Healthy Eggs: What to Buy.