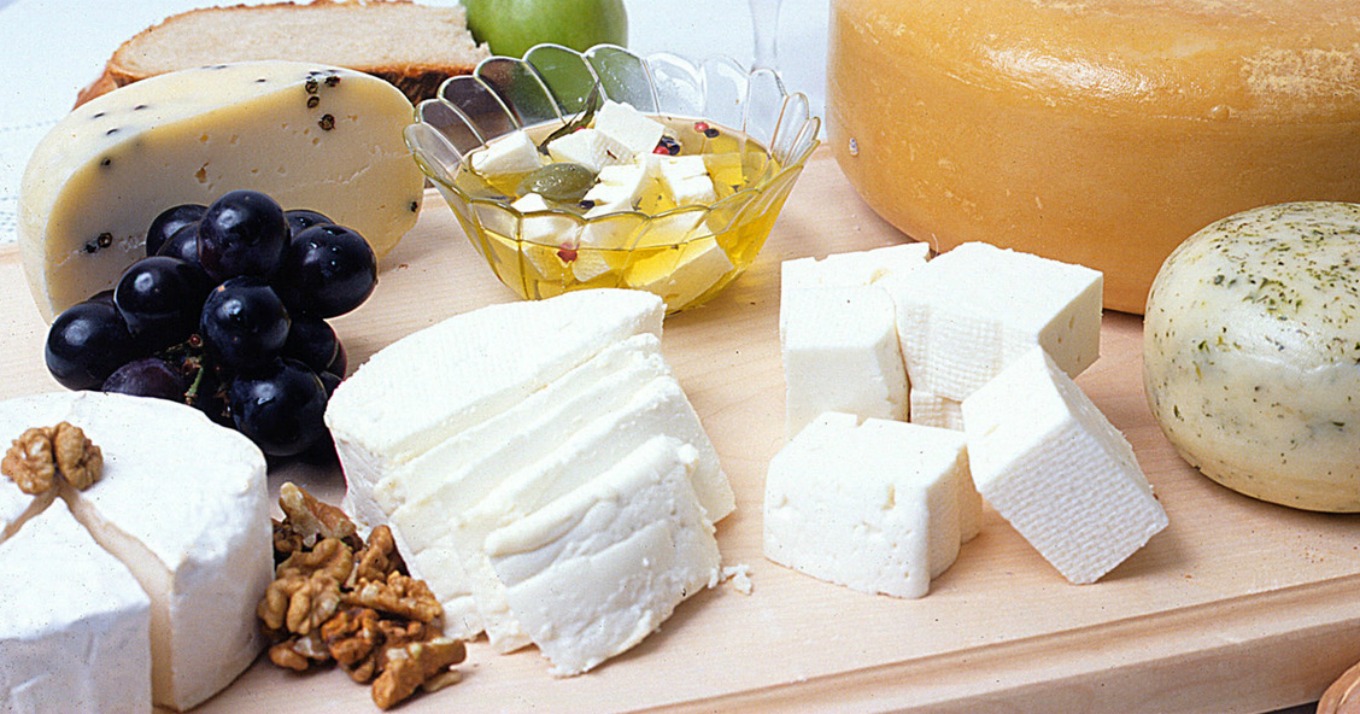 Did you know that most cheese in the United States is made from genetically modified ingredients? Additionally surprising? Many European cheeses imported to America, while from countries where GMOs are limited, are GMO-sourced. I’ve talked before about the dairy industry, how we need to be cautious, aware consumers when purchasing dairy products. What kind of husbandry principles are practiced by the dairy from which you buy your ice cream, butter, milk, yogurt and cheese?

But there’s another looming issue, one even more subtle…

Several months ago I took my first cheese making class. It was excellent. The cheese maker had just published a book and was touring, giving cheese making classes as her way of increasing book sales. She is a commercial cheese maker by profession, making huge volumes of artisan cheeses, all varieties. Her knowledge and experience are vast.

Her personal passion is not sustainability; it is gourmet cheese making. Yet she was happy to educate us about rennet and the varieties from which to choose. It was here that my metaphorical cheese bubble was burst.

I learned there are four kinds of rennet: calf stomach sourced, microbial rennet, vegetable rennet, and FPC (fermentation-produced chymosin). I learned that most cheese consumed in the US is made from the latter, a GM rennet. Most cheese. It is estimated that 80-90% of the cheese Americans consume is produced with genetically modified rennet.

How is this possible? The laws that prohibit GM production within Europe do not hold for exported items. And most European countries (not including France and Austria) now allow the use of FPC for their own citizens, as well.

Our family loves having a cheese plate out at every meal, even breakfast. I had grown accustomed to buying, among others, European cheeses from Trader Joe’s, because I assumed, although they weren’t organic, they were much less likely to be GM. I was wrong.

It was in the 1990s that the FDA approved the use of this genetically modified ingredient in food. Rennet was the first of many such decisions. “FDA concluded that bioengineered chymosin was substantially equivalent to calf rennet and needed neither special labeling nor indication of its source or method of production.” (source)

Why did this happen? Beginning in the 1960’s consumers began eating more cheese than the supply for which animal rennet provided. Because GM technology was just taking off, this route for keeping up with the demand was explored more readily than existing solutions (non-GM microbial rennet and plant-sourced rennets).

In addition to the rennet being GM sourced, many American’s buy conventional cheese without thinking about the milk. Most non-organic cheese produced in the US is made from the milk of cows that are fed GM feed.

We have a local creamery in the small city in which I live. A lovely family owns this company. It’s glorified, for good reason, as local; and many love this product for that reason. BUT, be aware; this family feeds their cows only GM feed.

HOW TO SHOP FOR CHEESE

While many dispute the organic label’s integrity, organic does mean non-GMO.

Checking the cheese label won’t tell you everything you need to know, but it does lend some insight. Certain kinds of rennet will more likely be GM.

For instance, vegetable rennet and ironically vegetarian are the terms that usually refer to GM rennet. This misnomer is based on the fact that animal genes are injected into a bacterial host which then in turn produces the desired rennet, chymosin. This fermentation-produced chymosin (FPC) is now considered a bacterial product; and thus may be labeled vegetarian. 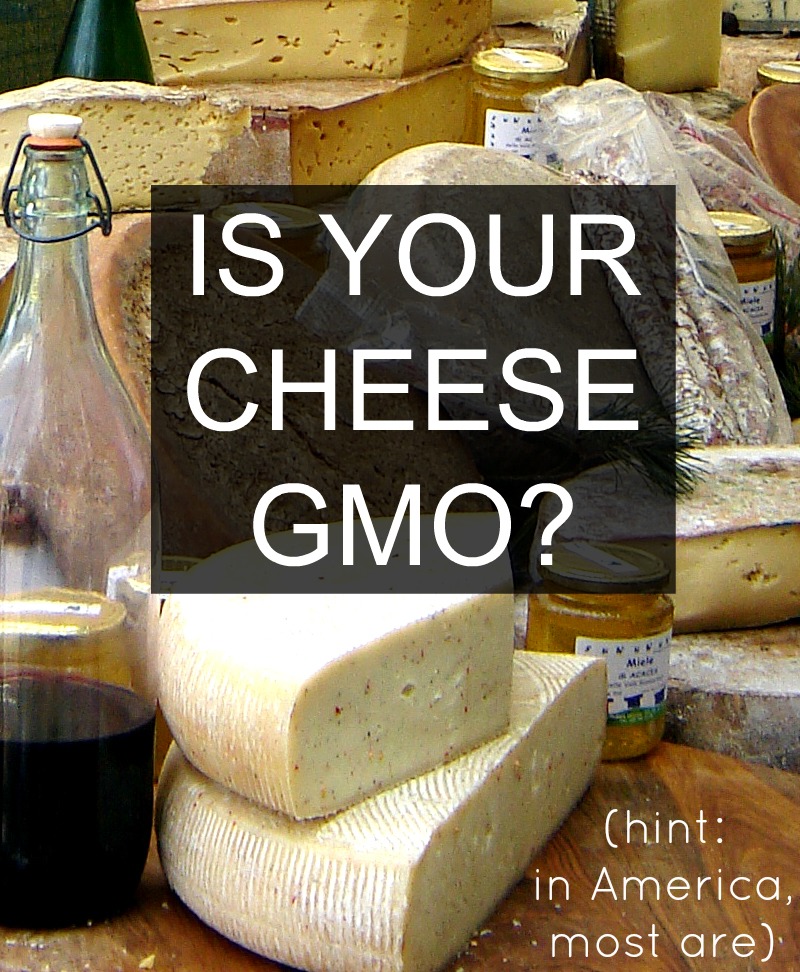 It is possible for vegetarian rennet to be non-GMO and truly vegetable-based. Plant-based ingredients like thistle and fig sap have been used throughout history to perform rennet’s role. But at this time in history it is uncommon to see these forms of rennet used, especially in commercial productions of cheese.

FPC rennet can also be listed by the term microbial rennet; however, some microbial rennets are exactly that: mushroom/fungus based rennets. They’re an excellent choice for cheese makers, being non-GMO (if labeled thus) and very common.

Sadly, FPC has proven exempt from labeling requirements. Whether from European or American sources, EU and FDA regulations are lax when it comes to ingredients that are considered trace. Some countries, such as France and Austria, are stricter with their labeling and exclusion of GM foods. French and Austrian cheeses are, therefore, likely safer than cheeses imported from other countries, when it comes to GM ingredients.

Look for cheeses that list animal or microbial rennet, especially if additional labeling clarifies the sustainability of the sourcing. Organic assures that both the milk and the rennet being used are non-GM and sustainable in their origins. (Regarding animal rennet and non-organic cheeses, bear in mind cheeses produced using animal rennet may be the bi-product of the inhumane veal industry.)

So while all commercially sold vegetable rennet-based cheeses are likely made from GMOs, only some portion of those labeled to contain microbial rennet will be.

A few complimentary messages seem to be repeating themselves, in our modern world of foods made by unknown hands: know your farmer; buy local and sustainable products; and rely on the organic label to mean non-GMO. 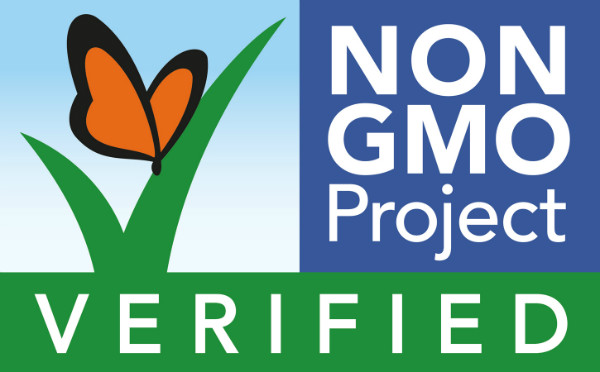 The Non-GMO Project, a US non-profit, has labeled FPC a “high-risk ingredient.” They add, “If a cheese has our seal on it, the consumer can be assured that it does not have [bioengineered] chymosin.” Likewise, all products labeled USDA Organic, 100% Organic, Organic, or Made with Organic (specified ingredients) cannot contain FPC.

There are companies that make their goods with extreme integrity. Seek these out, and feel good about the food you’re eating.

To read more articles that scrutinize issues which affect our health, also see my Facebook page and blog, Eat Beautiful.

Megan loves children's books, seaside vacations and easy gourmet cooking. Her first cookbook, EAT BEAUTIFUL: Grain-free, Sugar-Free & Loving It, is a #1 New Release on Amazon! She happily lives on 10 acres of blackberries, grapes and weeds with her hubby and three kids. Megan also owns a Paleo/gut-healing cafe where she loves serving up healing foods like bone broth and honey-sweetened grass-fed ice cream!