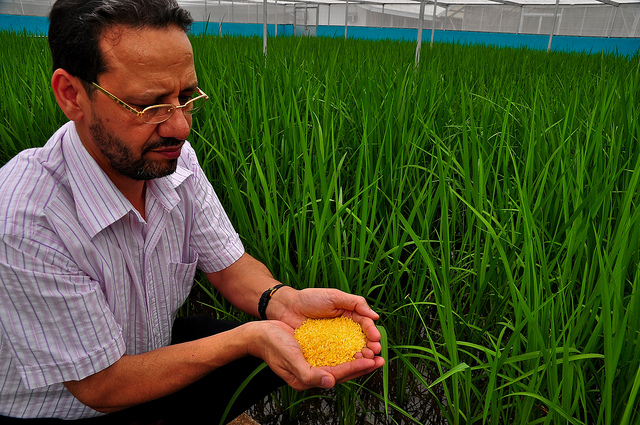 Those who argue in favor of the creation and propagation of genetically-modified organisms, also known as GMOs, will be the first to tell you that GMOs represent a great humanitarian effort to “feed the world.”

Yet despite their rhetoric, GMOs have gotten a lot of bad humanitarian press. GMO crops like corn and soy aren’t living up to their high-yield propaganda. And in less than a decade, India’s seen more than 270,000 farmers commit suicide because of the crushing debt they experienced as outrageously expensive GMO cotton and cereal grains performed far worse than anticipated.

Given all the negative coverage, it’s no wonder that they’re trying to tout the humanitarian benefit of Golden Rice — a GMO rice that’s been modified to produce extra beta-carotene. According to biotech firms, this rice will save the lives of millions of children who are suffering from vitamin A deficiency.

If you are unfamiliar with GMOs, don’t be fooled! GMOs aren’t benign hybrids created by farmers using age old practices like cross-pollination or grafting to create new strains of vegetables and fruits. GMOs are created in laboratories by researchers inserting completely foreign DNA into plants & animals using the advanced gene-splicing tools of biotech engineering. Want to know more about GMOs? Read this.

According to the latest spin, those of us who question the safety of GMOs are responsible for the deaths of the 8 million children worldwide that died from vitamin A deficiency in the last decade.

From Slate.com, we read that in the last decade:

… about 8 million children worldwide died from vitamin A deficiency. Are anti-GM advocates not partly responsible? …. Two recent studies in the American Journal of Clinical Nutrition show that just 50 grams (roughly two ounces) of golden rice can provide 60 percent of the recommended daily intake of vitamin A. They show that golden rice is even better than spinach in providing vitamin A to children.
(source)

In other words, if we had just fed these children Golden Rice, we could have prevented their deaths.

What the spin doctors won’t tell you is this: Golden Rice does not have elevated levels of vitamin A (retinol) in it. Rather, it contains high levels of a vitamin A precursor known as beta-carotene.

Many people can successfully convert beta-carotene into vitamin A.

But many more simply can’t.

Did you catch that? Children are poor converters of beta-carotene into vitamin A! Many recent studies continually affirm this fact (1, 2, 3, 4).

In other words, feeding these children beta-carotene rich Golden Rice will NOT prevent their vitamin A deficiency anymore than feeding them spinach or sweet potatoes will.

How To Get Real Vitamin A

The only true source of real vitamin A is animal foods. Since the liver helps store vitamin A, it is arguably the best source of vitamin A on the planet.

The best dietary sources of vitamin A are:

How to Improve Vitamin A Intake in Third World Countries

While the above foods may seem like premium or luxury foods in countries like the U.S., that’s only because they are so scarce in the wake of industrial agriculture. They are, in fact, as traditional as they come.

What could be more natural than a subsistence farmer having some hens, a cow (or goat, or yak, etc.), and a large garden to provide for his family?

Unfortunately, thanks to globalization, these historically normal foods are being pushed out of the diets of millions of impoverished families around the world as they are forced to abandon their life-sustaining land and resources and switch to wage economies that can’t support the swelling tide of hungry mouths.

In the short-term: supplement!

One of the most successful programs in the history of nutrition science is the global campaign to distribute high-dose vitamin-A capsules to children throughout Africa and Asia. Launched in 1997, the global campaign is a partnership between UNICEF and the World Health Organization (WHO) as well as the governments of Canada, the United Kingdom, the Netherlands, Japan and the United States Agency for International Development (USAID). The program has been particularly successful in Nepal where groups of local women known as Female Community Health Volunteers help distribute the capsules throughout the rugged terrain. In 2000, over 90 percent of Nepalese children had received their yearly dosage of vitamin A.
(source)

The international supplement program is, thankfully, supplementing with the animal form of vitamin A, retinol. At a cost of less than $1 per child per year, it is not a bad short term solution despite its inefficiencies.

In the long-term: return animals to the family.

Lack of animal foods, more than any other single factor, is the greatest contributing cause of vitamin A deficiency.

Organizations like Heifer International, which donate life-giving animals like cows, goats, chickens (and even bees!) to impoverished families, are changing the world.

Watch this video about Heifer International’s work, particularly highlighting their philosophy of Passing On The Gift, which requires helped families to pass on their animal’s offspring to other families in need.

There are many other organizations that provide animals to families in need including Episcopal Relief & Development, World Vision, and Oxfam, among others.

Golden Rice: A Panacea or a Hoax?

Just ask yourself this. If Golden Rice really was a panacea, the greatest humanitarian wonder ever to combat vitamin A deficiencies among the world’s poor and malnourished, then why is it patented?

Despite being the result of public research, golden rice is enmeshed in around seventy patents owned by some thirty-two companies and institutions, according to the US-based International Service for the Acquisition of Agri-biotech Applications.
(source)

Seventy patents? Proponents of Golden Rice will tell you that for humanitarian purposes, the rice is being licensed free of charge in developing nations.

However, the terms of the free license agreements are still unclear: they appear to cover research, but not release or commercialisation. This lack of clarity casts a huge question mark over how “free” the agreement really is and has huge implications for the accessibility, availability and affordability of golden rice to farmers around the world.
(source)

Noted spokesperson against the widespread use of GMOs in India, Vandana Shiva, has argued that until these biotech firms abandon their patents on Golden Rice, their motives for giving royalty free licenses for development of vitamin A rice “can only be taken as a hoax to establish monopoly over rice production, and reduce rice farmers of India into bio-serfs.”

« Your Apples Are A Year Old
My Natural Sweeteners of Choice »