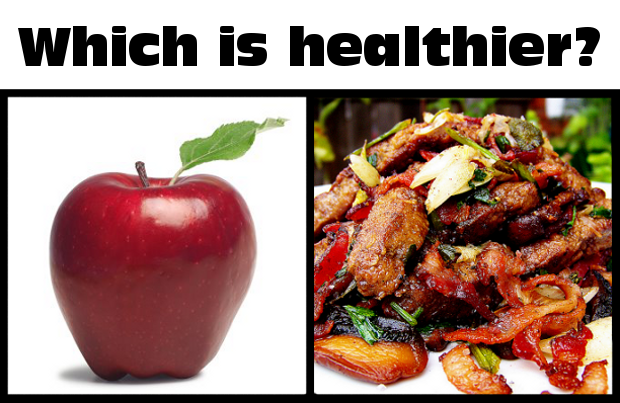 Before you answer, think. So many of us a programmed with knee-jerk, conditioned responses to questions like these. On the one hand, you’ll hear doctors or other “experts” tell you that liver is bad for a number of reasons. The organ’s job is to help detoxify your body, so it’s naturally full of toxins. It’s too high in dangerous vitamin A. It’s the red meat of red meats. On the other hand, you’ll hear those who argue that liver is the most nutrient-dense food on the planet, so it will beat out an apple hands-down in any contest fair and square.

I choose liver, particularly liver from pasture-fed ruminant animals like the cow. And here’s why. It’s more nutrient dense.

You can go on any nutrition data website and find out exactly how many nutrients are in 100g of raw, skin-on apples vs. 100g of pan-seared beef liver. I did it and found out these basics: 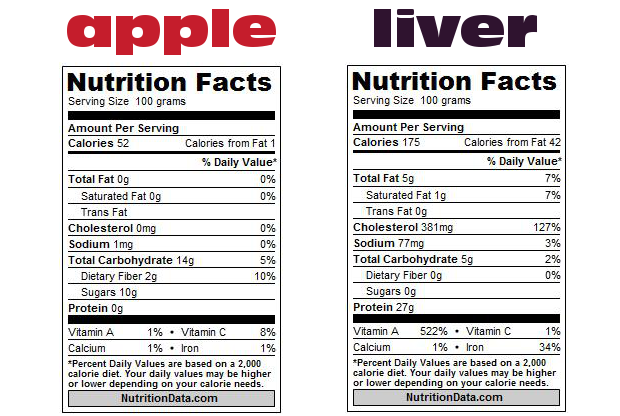 These bare bones nutrition labels are revealing. Of course, this assumes that you understand how to read food labels. For the same volume of food, liver beats an apple in just about every major category. It has more:

The apple beats the liver only in density of carbohydrates (mostly sugars), and vitamin C.

Yet I wanted to know more, so I read beyond the bare bones standard nutrition label and opted to see how the two compare on all the major vitamins and minerals. What I found was so overwhelming and suggestive that I thought a visual representation was the only way to do it justice. So, I created this interactive infographic for you:

Click on the vitamin or mineral to see how apples and beef liver stack up against each other.

That, my friends, is what I call nutrient density.

What about all that saturated fat?

Recently, a number of meta-analysis studies have been released in which scientists combed all the data from all the studies that have ever been done which contained information regarding dietary intake of saturated fat and incidence of heart disease. When scientists do a meta-analysis, it is usually in the hope of finding a statistically significant pool of information to help prove their hypothesis. For example, pretend that 10 studies had been done on diet and incidence of heart disease. Each study only had 100 participants, so any conclusion about diet and heart disease from that study might be statistically insignificant. But if you pool the results from all ten studies in a meta-analysis, you might be able to demonstrate some statistically significant results.

So, what have the recent meta-analysis studies discovered? That there is no link between dietary intake of saturated fat and incidence of heart disease. Of the recent meta-analysis studies, the two most famous ones were published in prominent journals. The first, titled “A Systematic Review of the Evidence Supporting a Causal Link Between Dietary Factors and Coronary Heart Disease” was published in the 2009 Archive of Internal Medicine. The second, titled “Meta-analysis of prospective cohort studies evaluating the association of saturated fat with cardiovascular disease” was published in the January 2010 edition of the American Journal of Clinical Nutrition.

It’s time to turn the page on how we perceive saturated fats in relation to risk for heart disease. It’s the wrong message that saturated fats are artery-clogging or evil.

Krauss says any dietary recommendations to further reduce saturated fat would be of no benefit. Americans, he says, shouldn’t be avoiding all forms of saturated fats and it’s erroneous to focus on saturated fat out of context from the whole diet.

If you want to read more about how the scientific tide is turning in favor of eating more saturated fat, check out my post on A Tax On Saturated Fat.

But liver is red meat. Have you read The China Study?

Why yes, I have. And I’m proud to say that The China Study has been thoroughly debunked to my satisfaction. There is nothing wrong with eating red meat, even the reddest of red meats — liver.

Why does nutrient-density matter?

Maybe I’ve convinced you that liver is more nutrient-dense than apples. So what?

I’m all in favor of well-rounded diets filled with simple culinary delights like apples and Edible Aria’s Not Your Average Liver & Onions (seen above).

But I’m tired of seeing nutrient-poor foods displace nutrient-dense foods in the average diet. Here’s the deal. You can only eat so much. Then you get full. If you eat a lot of calorie-rich but nutrient-poor food, you’ll become what I call nutrient starved.

A nutrient starved person may eat plenty of food, but because they’re not getting the nutrients their body needs to function optimally, they suffer. Maybe they eat even more empty calories, so gain weight. Maybe they feel lethargic or suffer from some systemic body imbalance. Maybe their sex drive plummets, or they start having troubles sleeping well.

If you want to avoid nutrient starvation, you need to eat more nutrient-dense foods, period.

So, let’s test your new-found knowledge.

Are apples nutrient-dense? NO.