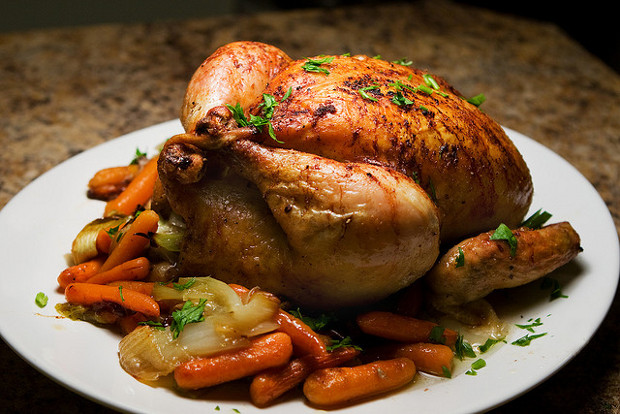 Ah what a wonderful world we live in — a world where giant agricultural producers regularly feed arsenic to chickens. This, mind you, isn’t how they kill the chicken. No, it’s how they make them grow bigger, faster, cheaper. Administered in small amounts, arsenic is one of many compounds found in various drugs routinely administered to chickens in their feed. These same giant agricultural producers have maintained for years that the arsenic never makes its way into the actual chicken meat sold at the supermarket. It all gets pooped out! Or so they say. Yet if that’s the case, then why did the FDA recently admit that arsenic does, in fact, show up in supermarket chickens?

But WAIT! They say. It’s not at levels that are actually dangerous to you, the end consumer. Your chicken is still safe!

Back in March, Tom Philpott reported on the practice of feeding arsenic to factory-farmed chickens:

The idea is that it makes them grow faster — fast growth being the supreme goal of factory animal farming — and helps control a common intestinal disease called coccidiosis.

The industry emphasizes that the arsenic is applied in organic form, which isn’t immediately toxic. “Organic” in the chemistry sense, that is, not the agricultural sense — i.e., molecules containing carbon atoms as well as arsenic. Trouble is, arsenic shifts from organic to inorganic rather easily. Indeed, “arsenic in poultry manure is rapidly converted into an inorganic form that is highly water soluble and capable of moving into surface and ground water,” write Keeve E. Nachman and Robert S. Lawrence of the Johns Hopkins Center for a Livable Future.

Inorganic arsenic is the highly poisonous stuff — see the absurd and wonderful Cary Grant classic Arsenic and Old Lace, or the EPA’s less whimsical take here and here [PDF]. The fact that the organic arsenic added to feed turns inorganic when it makes its way into manure is chilling, given the mountains of concentrated waste generated by factory poultry farms.

Let’s imagine for a moment that we can put aside the environmental nightmare that is concentrated arsenic (and other pharmaceuticals) getting pooped out of millions of chickens and making its way into the ground water and polluting our water supply.

Let’s also imagine that the levels of arsenic found in chicken sold at supermarkets is, in fact, quite small — so small as to be harmless. Never mind that it is inorganic arsenic (highly toxic) rather than organic arsenic (naturally occurring in rocks, air, plants, etc.). Let’s just put that aside and play their game.

Let’s also imagine that every manufacturer of pharmaceuticals for poultry has pulled arsenic containing drugs off the market in response to the newest finding, and not just the single drug manufacturer in question, Pfizer.

I’m still left with a haunting question. Why does Big Ag continue to think that it’s wise to wait for potential consumer panic before ending obviously dangerous practices? Why do they wait for government agencies to force their hand before they abandon such harmful idiocies?

Last month, Tom Laskawy asked a similar question and shared his own observations. He wrote:

It’s no wonder that the so-called “ag-gag” bills remain popular among industrial farmers and their political lackeys. They can’t seem to let go of consumer ignorance as a key business strategy. With arsenic in chicken, the FDA, the USDA, and the chicken industry seem to care far more about the perception of having acted rather than the reality of ensuring all chicken sold in the U.S. is free from this toxic substance.

Consumer ignorance as a key business strategy. I like that turn of phrase, and it’s undeniably true.

It’s another reason why I wasn’t the least bit disturbed by the scene in Food, Inc. when we saw Joel Salatin’s open air chicken slaughtering operation. Yes, it’s mildly difficult to watch animals die when you’re not used to it. But this was out in the open, done quickly and mercifully, done at a natural human pace, and done in a way that was fresh and clean and full of sunshine.

No, what’s really disturbing is the slaughterhouse hidden behind cement walls, the one where we never see the insane and inhumane practices required to kill more than a thousand pigs every hour, the one where machines designed to aerate pig brains also cripple factory line workers who regularly inhale the atomized brains.