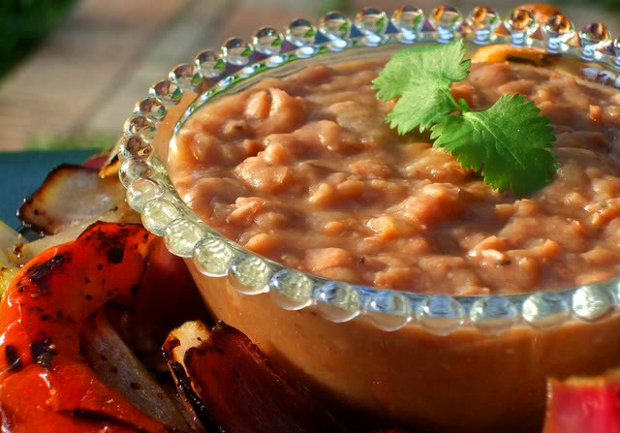 Refried beans are one of my favorite comfort foods. They’re also cheap — dang cheap. And, they’re a tasty way to get lots of nourishing fats into you and your loved ones. The way I grew up, refried beans were one of life’s many mysteries. I ordered them at Mexican food restaurants, or my mom bought them in a large can at the supermarket. That’s what refried beans were to me — something not-too-healthy that I paid too much money for.

Only as an adventurous adult did I foray into the world of making my own refried beans and discover how easy and cheap they are to make — and how ridiculously rich and flavorful I could make them when I had free-reign.

All beans are high in anti-nutrients like phytic acid. So, as with grains, you’ll want to soak them first. This has the added benefit of eliminating one of the unnecessary side-effects of eating modern beans: bad gas.

Furthermore, as with any starchy food, the more fat you add, the better. Refried beans are already high in resistant starches — the kinds of starches that resist digestion and can help balance blood sugar levels and burn fat stores. Add tasty fat to the mix and you’ve got a recipe for satiety as well as nutrient-density. In the interest of being “traditional”, I used to make these with lard from foraged hogs, but that’s gotten harder to come by. Turns out, substituting pastured butter or grass-fed ghee added a remarkable depth of flavor I’d only previously found when using rendered fat from cooking fajitas.

So, without any further ado, here’s my recipe for old-fashioned refried beans.

Begin by placing pinto beans in a large bowl with enough water to cover and a dash of salt. Cover with a lid (I use a plate) and soak for 24 hours.

Drain remaining liquid from your soaked beans. Transfer beans to a stock pot and again add enough water to cover and a dash of salt. Bring beans to a boil, cover, reduce heat and simmer for 2-4 hours until beans are falling apart and tender.

Drain liquid from cooked beans. Now comes the fun part. Add diced tomatoes and 1/2 C. of melted butter or ghee. Using a stick blender, blend the cooked beans until they turn into a relatively smooth mush.

In the meantime, melt remaining butter or ghee in a large, 12-inch, deep skillet on the stove over medium heat. (This is my skillet. Looks like they call it a “saute pan”.) Transfer mashed, cooked beans into the skillet. Add seasonings and stir with a flat-bottomed spatula (to prevent burning) until the beans start to boil and the seasonings and fat are evenly distributed.

Remove from heat and serve. You can refrigerate the leftovers for up to a week, or transfer to your freezer to keep for later use.