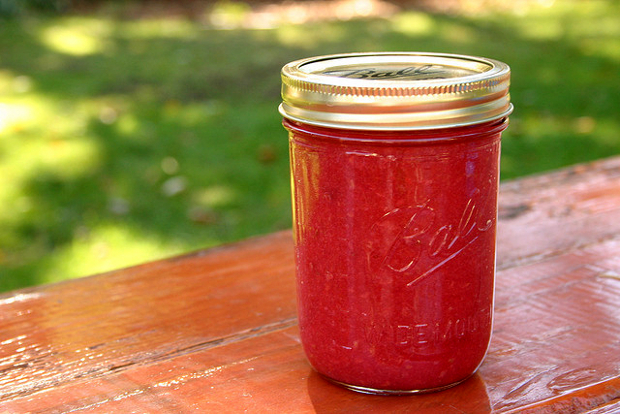 I liked raspberries. I liked the smokiness of chipotle peppers. Intrigued, I took a bite. It’d been poured over a small dish of cream cheese, and I scooped up a small bite of the appealing concoction.

I faithfully bought jars of raspberry chipotle sauce from them for years. And then one day I looked at the ingredients.

Sugar was the number one ingredient! That means there was more sugar in that sauce than raspberries. No wonder I’d become so quickly addicted.

Abandoning the raspberry chipotle sauce left a bitter taste on my tongue — a sense of regret and loss.

My roasted chicken, my pork chops, my salmon patties! They would never be the same again.

That is, until I decided to make my own. Turns out it’s easy to make raspberry chipotle sauce at home.

Yield: A little less than a pint.

2. Add apple cider vinegar to the frying pan and stir gently, scraping the bottom of the pan to incorporate the browned jalepeño juices.

3. Add raspberries, honey, and adobo seasoning and cook down until sauce forms, stirring regularly. Simmer until reduced to desired thickness. If necessary to keep sauce from browning, lower the heat.

4. Remove your raspberry chipotle sauce from heat and pour into jar or bowl. Allow to cool before serving.

Please note: I use Swanson Organic Mexican Adobo Seasoning for a number of reasons.

First, it’s rich in chipotle peppers where other adobo seasonings are just an herb blend. Second, it’s got a zesty kick of lemon in it as well. If you don’t use an adobo blend that has these two things, the recipe just won’t be the same. Technically, it wouldn’t even be chipotle because it wouldn’t have any chipotle peppers in it!

I suppose that if you wanted to, you could substitute in one canned chipotle pepper in adobo for both the fresh jalepeño pepper and adobo seasoning in this recipe. I’d also be sure to add a splash of lemon juice or a bit of lemon zest into the mix to get the extra lemony umph. Just be wary of how many canned goods you are eating! BPA levels in your blood have been shown to rise 1200% when you regularly eat canned goods. (It’s one of the many reasons I try to avoid them unless they’re home canned in jars or made by companies using BPA-free cans.)