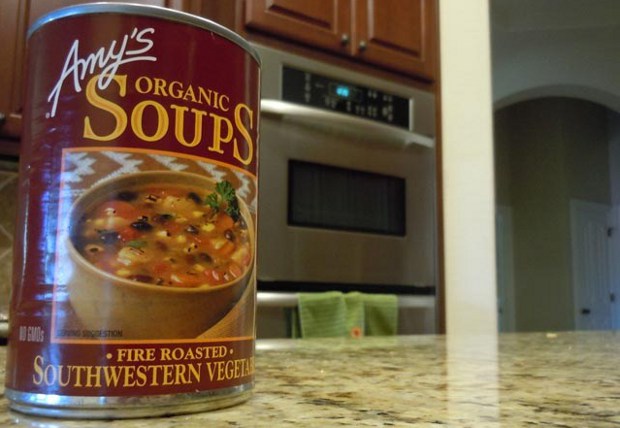 A recent study published in the November 23rd Journal of the American Medical Association found that people who ate canned soup for five days straight saw their urinary levels of the chemical bisphenol A (BPA) spike 1,200 per cent compared to those who ate fresh soup. About a year ago, the FDA admitted that BPA is dangerous, but conceded that the government agency is powerless to regulate its use.

BPA is an endocrine-disrupting chemical pervasive in our food supply thanks to its use in lining canned goods. Over the years, studies have linked it to breast and prostate cancer, diabetes, obesity, heart disease, reproductive failures and behavioral problems.

Although these ill effects have been widely circulated (enough so that baby bottle manufacturers are quick to point out their new BPA-free plastic), it is not until this study that we learned just how easily BPA levels rise in the body when exposed to canned foods.

Participants in the study ate a 12-ounce serving of either fresh or canned soup for five days in a row. In all other ways, their diets were not altered. They simply added in a single serving of soup daily. After a two-day break, the groups switched so that those who’d eaten canned soup now ate fresh and those who’d eaten fresh soup now ate canned. This way, researchers could measure the “typical” amount of BPA in their urine and compare it to the amount after consuming one additional canned food per day.

The results were simply shocking in their magnitude. Those who ate canned soup had 1,221 per cent higher levels of BPA than those who ate the fresh soup.

Imagine what this means for the typical consumer!

I grew up eating canned vegetables. Although I got out of the canned vegetable habit somewhere in my early twenties when I struck out on my own, I did still buy canned soups, canned tomatoes, and canned fish like tuna and salmon. Even buying organic versions of those foods doesn’t make a consumer safe, since most organic canned goods still contain BPA in the linings. Only recently have I started opting out of canned goods altogether, with the only exception being some canned fish which I know to be in BPA-free cans.

“The magnitude of the rise in urinary BPA we observed after just one serving of soup was unexpected and may be of concern among individuals who regularly consume foods from cans or drink several canned beverages daily,” said senior author Karin Michels. “It may be advisable for manufacturers to consider eliminating BPA from can linings.” (1)

Many manufacturers have started doing just that. In fact, my local grocery store has started carrying a few. And I admit to buying them!

(There you have it, fine readers. I’m a busy mother of three, and I’m happy for my shortcuts when I need them.)

Only Muir Glen seems to have solved the mystery of how to can tomatoes in a BPA-free can. Unfortunately, they are still in the process of transitioning to BPA-free cans. Plus, there is nothing on their label yet to indicate which cans are BPA-free and which cans aren’t. Rather than waste my money on a chance that I might be buying BPA-free tomatoes, I prefer these BPA-free, non-canned choices:

Bionaturae Organic Tomato Paste
This tomato paste is literally just like homemade. Pure organic tomatoes. No added ingredients. Sealed up nicely in a BPA-free jar so you can relish tomato-rich goodness all winter long. This is great stirred into curries, sauces, and stews.

Pomi Chopped Tomatoes
These are another pure tomato product with no added ingredients, seasonings, etc. They are stored in BPA-free tetra pack, but chopped for when you need more texture than plain tomato paste. Pomi is an Italian product, and is therefore not USDA Certified Organic. They think they’re better than organic. Here’s why. According to Pomi’s marketing department, “To answer if Pomi is organic, Pomi’s manufacturer Boschi is a certified producer of organic products in Italy. Also, Pomi’s tomatoes are never grown with herbicides or pesticides. The process is all natural which produces the highest quality and most natural tomatoes. We do not use genetically modified seeds to grow our tomatoes either. Pomi abides by the European Union’s regulations for sustainable agriculture. Italy has much stricter policies with regards to what is considered organic and how farmer’s grow their crops.”

Muir Glen Organic Fire Roasted Tomato Pasta Sauce
Of course, any jarred pasta sauce is probably safe from BPAs, but this is our favorite. I love the flavor of the fire-roasted tomatoes. It’s awfully convenient to have this on hand when I don’t have any home jarred tomato sauces to turn to.

Native Forest Organic Coconut Milk
To my knowledge, Native Forest is the only brand of BPA-free canned coconut milk available on the market.

Yes, it’s still canned. But that’s it! It’s just coconut milk and nothing else — no guar gum, no fillers or additives, and NO BPA. 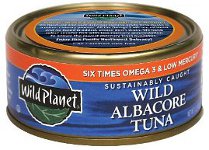 Wild Planet Sustainably Caught Wild Albacore Tuna
The entire line of Wild Planet’s canned seafood is BPA-free, and the tuna is what we buy most often. It’s sustainably caught and wild, and it makes a quick lunch or dinner when you’ve forgotten to get something out of the freezer in time.

Of course, you can always be super industrious and put up your owned home-canned (really jarred) vegetables, soups, and sauces. Even if you don’t grow your own, you can buy in bulk at the Farmer’s Market when that crop’s harvest comes in. It’s invariably quite cheap, usually cheaper than buying similar, non-organic food at the super market since the farmers have to get rid of large quantities quickly.

You can also cook foods up fresh and in season. Eating seasonally is quite adventurous, and I love doing that with most of my vegetables and fruits. The downside for me is that it means not having tomatoes or berries in the winter, and that’s something I just can’t abide. Hence, I either home can these few items when they’re abundant and ripe, or I buy BPA-free versions of these out of season at the store. The good news is that I only make homemade soups these days. If I have too many leftovers, I simply freeze them. Here’s a list of some of my favorite fall soups.

It goes without saying that, for me, other canned goods — like sodas, veggies, or beans — simply aren’t worth the effort of finding BPA-free. Not only are these canned goods devoid of nutrients, but they’re far better fresh or frozen. We make homemade water kefir soda and kombucha — beautiful tasting probiotic-rich alternatives to soda. Nothing beats fresh veggies, although we often use frozen veggies to get greens out of season. And dried beans are so inexpensive and easy to store, soak, sprout, & prepare that I see no need to pay an arm and a leg for organic BPA-free canned beans.

« Fight Back Friday November 25th
Can Organic Feed The World? »