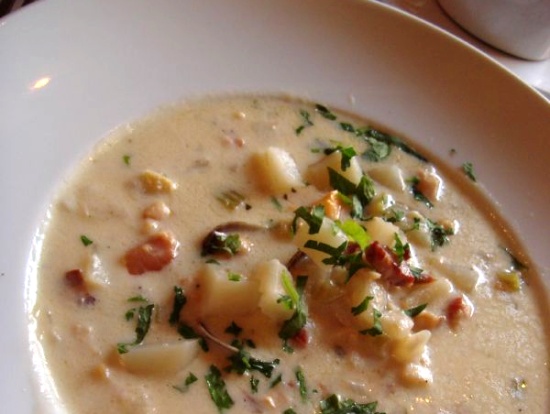 Looking for a good clam chowder recipe? Last week I had company over and decided to make my typical clam chowder, but with an extra savory kick. I added bacon to my aromatic vegetables and diced green chiles to my broth base. Oh. My. Goodness. If you love clam chowder, you are going to love this!

1. Begin by frying up your bacon in a medium cast-iron skillet. Rather than crumbling hot bacon after it’s cooked, I prefer to just cut my raw bacon with kitchen shears and allow it to fry into already-crumbled bits. To your fried bacon bits, add the onion and celery and allow to cook until the veggies turn translucent.

3. About 10 minutes before broth and aromatic veggies are ready, begin making your roux in a small sauce pan. Melt butter over medium heat; then add flour, stirring constantly to create a pasty roux. To the hot roux, add cold cream. (REMEMBER: HOT roux + COLD cream = NO LUMPS!) Continue stirring over medium heat until it thickens into a nice, creamy gravy.

5. Serve up your extra tasty clam chowder in bowls, topped with grated cheese and cilantro or diced green onions. ENJOY!