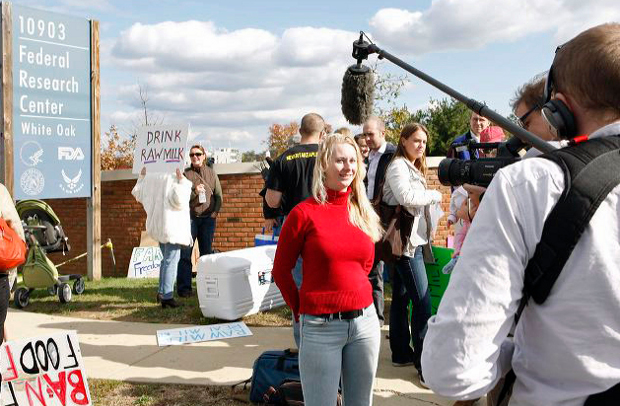 Tomorrow a group of moms is going to break federal law. In public. They are going to openly defy the federal prohibition against the transport of raw milk across state lines. They’re calling themselves Raw Milk Freedom Riders, and their goal is to get the federal law repealed. After the last group of Raw Milk Freedom Riders crossed state lines with raw milk in a public protest on November 1st, the FDA issued a statement saying that it would not use the federal law to criminalize individuals who transported raw milk for their personal consumption.

Well, whoop-dee-doo. But what about farmers who transport raw milk across state lines for their customers? Or agents who transport raw milk across state lines for others? Because of the distance between consumers in one state (where raw milk sales may be illegal) and farmers in another (where such sales are legal), these sorts of arrangements are unsurprisingly common. Would you drive several hundred miles every other week for your raw milk? Or would you rather join a group of buyers that empowers someone else to do the driving for you all — saving individual group members fuel costs, time, and energy?

Tomorrow’s group of moms won’t be transporting raw milk for themselves. They’ll be bringing it across state lines and serving it up to others in a raw milk and cookies rally at Chicago’s Independence Park. Why would they risk arrest, fines, or imprisonment?

I wanted to know. So, I asked them.

Nancy J., one of the participants in tomorrow’s freedom ride, said this:

I do have to say the thing that compels me is the HUGE infringement on people’s rights to whole, healthy and unprocessed foods from good, small, organic farmers whose own livelihood has been infringed upon by our corrupt governmental system.

Living in a large metropolitan area and having to work to provide for myself (an not live off government handouts) I found that easy convenient access to these foods is practically non-existent. Even with Whole Foods – they still have a lot of what I would consider as unhealthy foods and VERY high priced organic fruits and vegetables! This is what makes it so difficult to eat “healthy”.

I used to have a creative hobby which has gone to the wayside because most of my free time is consumed by getting and preparing healthy foods for myself to consume. Most of what I spend my earnings on are necessary bills (home, utilities, gas and food). My friends and family think I have gone off the deep end and it is very hard to encourage others to eat well when “the system” makes it so hard to find good healthy foods and affordable foods for ALL! Until more awareness of these issues is raised and “out there”, the people will not wake up to the erosion of their freedoms!

Writing and calling legislators feels useless as they do not listen to us since they are corrupt and bought by corporate interests so this is MY way of showing how serious I am about this FREEDOM issue!

I am an RN and this will be my second ride with the Raw Milk Freedom Riders. I drove to DC with my two little ones last month. This time I ride alone.

I am compelled to join this fight as I believe it is a pinnacle issue in a much larger overarching problem with our food system and the abuse of power which promises to “protect” us. Unless we stand up now at this time, when will the abuse stop? How will our children ever access real food and escape chronic disease?

For me personally, I started drinking Raw milk over two years ago when my son, Ethan, (then 5) was diagnosed with Autism. Along with many other changes in his diet, I learned about the differences in Raw milk and believed that this would be a piece of his recovery. After two years I can say it has made a world of difference. A child who at five was extremely weak and lethargic, now has amazing energy and good strength which only keeps improving. The dense nutrition has helped him in so many ways. He no longer has Obsessive Compulsive tendencies as he once did, he is extremely social and although we have not had him retested, I can tell you he no longer fits the criteria needed for an Autism Diagnosis. I fight for my own family, and for all the families who want the choice to be able to purchase Raw Milk. I fight for the farms that continue to provide the milk despite the overwhelming fear of being raided, their product raped and children traumatized. I believe some of the greatest change in our country have come at the hands of civil disobedience and I hold to that tradition. We in so many ways live in a police state and it is time to take it back.

As an RN, I believe Raw Milk holds amazing healing potential. Two Drs, Charles Stanford Porter and Bernarr MacFadden, both used a diet of Raw Milk to heal many diseases. After reading their works, I was convinced to do the Raw Milk diet myself and I and my family are currently on day 9 of a minimum 21 day trial. So far results have been very promising.

Would you be a Raw Milk Freedom Rider?

If you care about having access to farm fresh raw milk and you live in the Chicago area, please consider joining these moms tomorrow, December 8, 2011 from 11:30am-2:00pm in Chicago’s Independence Park.

Organized by Wisconsin dairy farmer Max Kane and Liz Reitzig (a raw milk drinking mother of 5, pictured above), the rally is going to be quite the event. More than 200 participants are expected to demonstrate, and just get a look at the list of speakers:

Now is the time.

The fight for your future access to the farm-fresh, nutrient-dense foods of your choice is happening now. This year, the FDA has systematically escalated its fight against private food clubs, herdshares, and small farmers in a coordinated effort to shut down consumer access to raw milk.

We’ve seen raids against Amish farmers, food clubs defy their milk being quarantined, judges assert that you don’t have a fundamental right to consume the foods of your choice, buying clubs raided, and local farmers being forced to throw away their food by local government agents despite a lack of warrants to do so.

The only way to draw attention to these injustices, to repeal unjust laws, is to act in defiance of them. There are an estimated 10 million raw milk drinkers in the U.S. today, and that number is growing. Will we stand together? Will we fight to protect our access to raw milk? Will we defend our farmers?

« Gift Ideas From My Own Home
Fight Back Friday December 9th »