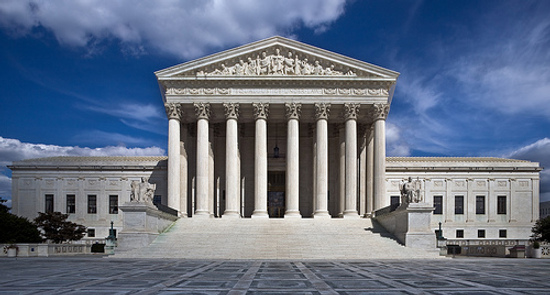 Remember how the Supreme Court heard it’s first case involving genetically-engineered crops in April? Today they announced their decision. It is a mixed victory for us Real Foodies.

The high court left the ban on the planting of Roundup Ready alfalfa in place, so for all practical purposes the “good guys” are celebrating today. The court did say, however, that the lower-court judge had overstepped his authority.

About the victory, the Center for Food Safety (which helped fund the plaintiff’s case and initially sue the USDA), released this statement:

The Center for Food Safety today celebrated the United States Supreme Court’s decision in Monsanto v. Geerston Farms, the first genetically modified crop case ever brought before the Supreme Court. Although the High Court decision reverses parts of the lower courts’ rulings, the judgment holds that a vacatur bars the planting of Monsanto’s Roundup Ready Alfalfa until and unless future deregulation occurs. It is a victory for the Center for Food Safety and the Farmers and Consumers it represents.

“The Justices’ decision today means that the selling and planting of Roundup Ready Alfalfa is illegal. The ban on the crop will remain in place until a full and adequate EIS is prepared by USDA and they officially deregulate the crop. This is a year or more away according to the agency, and even then, a deregulation move may be subject to further litigation if the agency’s analysis is not adequate,” said Andrew Kimbrell, Executive Director of the Center for Food Safety. “In sum, it’s a significant victory in our ongoing fight to protect farmer and consumer choice, the environment and the organic industry.”

“We brought this case to court because I and other conventional farmers will no doubt suffer irreversible economic harm if the planting of GE alfalfa is allowed. It was simply a question of our survival, and though we did not win on all points of the law, we are grateful that the practical result of today’s ruling is that Monsanto cannot take away our rights and Roundup Ready alfalfa cannot threaten our livelihoods.”

The court’s decision was 7 to 1, with the majority opinion written by Justice Samuel Alito.

The Court also held that:

~ Any further attempt to commercialize RRA even in part may require an EIS subject to legal challenge.
~ The Court further recognized that the threat of transgenic contamination is harmful and onerous to organic and conventional farmers and that the injury allows them to challenge future biotech crop commercializations in court.

“The bottom line is that the Supreme Court set aside the injunction because the vacating of the commercialization decision already gave us all the relief we needed, by forbidding RRA planting until a new decision is made by the agency. And at such time, farmers and consumers still have the right to challenge the adequacy of that process.” said George Kimbrell, senior staff attorney for CFS. “The Court’s decision affirmed that the threat of genetic contamination of natural plants posed by biotech crops is an issue of significant environmental concern now and in the future.”

So, score one for those of us fighting GMO foods! And congratulations and many thanks to Phil Geerston and the Center for Food Safety who took on some seriously BIG Goliaths — including the USDA, Monsanto, the American Farm Bureau, and the U.S. Chamber of Commerce.