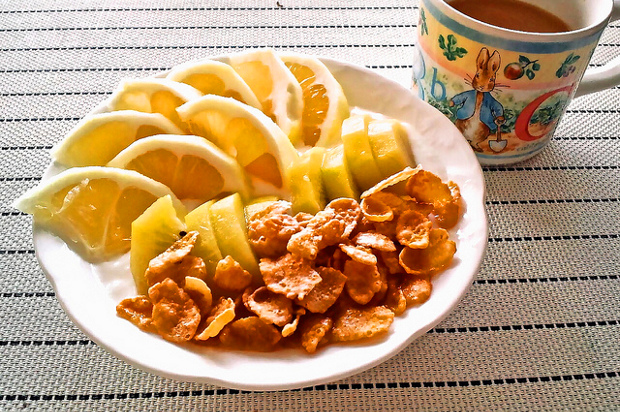 In the quest to avoid genetically-modified organisms (GMOs), many opt to buy “all-natural” or even certified “GMO-free” breakfast cereals. Sadly, a report recently issued by the Cornucopia Institute studied the contents of these cereals and found utterly shocking results.

Many of the so-called “natural” cereals tested contained up to 100% GMO ingredients!

For non-organic “natural” products making “non-GMO” claims, results showed that these claims cannot always be trusted. While Peace Cereal® and Annie’s Homegrown® were indeed free of significant levels of GE ingredients, Barbara’s Bakery® Puffins® and Whole Foods’ 365® Corn Flakes, which are both enrolled in the Non-GMO Project contained more than 50% GE corn.

What about certified organic cereals?

Thankfully, organic certification did seem to make a difference:

On the other hand, as a control, The Cornucopia Institute also tested Nature’s Path® certified organic corn flakes, which were free of significant GE contamination (>0.5%). These test results underscore the importance of the organic label, which assures consumers that the manufacturer uses only non-genetically engineered ingredients.

Why does the organic certification seem to help?

The report concludes that part of it may be that organic certification on ingredients is done by a third party, which means that those ingredients are verified organic (which is, by definition, GMO-free). On the other hand, there’s no such verification process for GMO-free ingredients. (The Non-GMO Project only verifies individual food products.) A manufacturer may think that they’re buying GMO-free corn to make corn flakes, but they may be getting duped. That’s because the claim that ingredients are GMO-free is just that — a claim.

I suppose it’s also possible the manufacturer isn’t duped, but is trying to dupe you!

Why should you care about GMOs in your food?

The safety of GMOs has not been adequately tested here in the U.S. Such safety tests are only done by the companies, like Monsanto, that have huge financial investments riding on the study outcomes. That’s partly because they have not given permission for independent researchers to use their patented seeds and plants in safety trials.

The only human feeding study ever conducted was cut short due to unexpected findings—that GE proteins do not digest in the gut as the biotech industry insisted they would.

Dr. Lisa Weasel, Ph.D., a molecular biologist and professor of biology at Portland State University in Oregon, author of Food Fray: Inside the Controversy over Genetically Modified Food, states: “Safety testing is very limited. Who’s doing the safety test? When Monsanto wanted to introduce rBGH (recombinant bovine growth hormone), it commissioned the University of Vermont to study the impacts. Monsanto did not like the results, so the data was suppressed. In the end activists forced the results to be made public.”

Some safety testing has been done in other countries, though, and the evidence that mounts continues to be damning. Here’s an especially alarming zinger from the report:

Canadian researchers reported in Reproductive Toxicology, published in 2011, that the blood of 93% of pregnant women and 80% of their umbilical cord blood samples contained a pesticide implanted in GE corn by the biotech company Monsanto, though digestion was supposed to remove it from the body (according to Monsanto-funded research). “Given the potential toxicity of these environmental pollutants and the fragility of the fetus, more studies are needed,” the scientists wrote.
(source)

Should you even be eating breakfast cereals, anyway?

The short answer? No.

Regardless of the presence or lack of GMOs, most breakfast cereals contain extruded or highly-processed grains — even the so-called “healthy” ones made from whole grains.

For more on how and why these methods of grain preparation wreak havoc on your long-term health, read this post on How To Eat Grains.