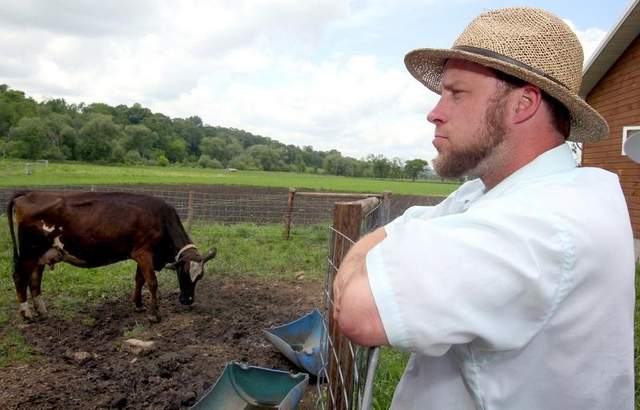 I am doing my happy dance. Vernon Hershberger, the Amish dairy farmer recently on trial in Wisconsin for providing raw milk to his community, was acquitted last week by a jury on three of the four charges against him.

The state of Wisconsin charged Hersbherger with operating a farm store without a retail food establishment permit, operating a dairy farm without a milk producer license, operating a dairy plant facility without a license, and violating a hold order that the state’s department of agriculture placed on food on his farm during a 2010 raid. Hershberger was acquitted of the first three charges and found guilty of the fourth.

His acquittal marks a huge step forward in the food rights movement because it upholds private contracts between individuals and counters overbearing government regulations.

In the state of Wisconsin, it is illegal to sell raw milk. So Hershberger created a private arrangement whereby members of his community could become leaseholders on his farm, entitling them to a share of the farm’s produce — including raw milk.

In essence, they did not “buy” milk, but a share in the farm.

If leaseholders couldn’t contribute to the farm financially, then they contributed in other ways by mucking out stalls and doing various chores around the farm.

Hershberger was represented by lawyers with the Farm to Consumer Legal Defense Fund. Pete Kennedy, president of the fund, writes:

The prosecution spent days arguing that Hershberger was operating a retail operation. He had a farm store, a cash register, order slips, receipts. Yet the jury remained unconvinced. The state attempted to argue that Hershberger’s arrangement was no different than any other membership-based retail buying club like Sam’s or Costco.

Yet the defense’s lead attorney, Glen Reynolds, argued that Hershberger operated according to Amish principles. If members fell on hard times and couldn’t afford the food, then they could get it for free.

“None of us would go into a Kwik Trip and walk out with a bottle of milk if we couldn’t afford it,” Reynolds said.

State officials spent three years investigating Hershberger, producing thousands of documents but not once speaking with any of the members of the buying club who wanted to tell their story, according to Reynolds.

“This is one of the most incomprehensible abuses of power I have ever seen,” he said, adding that the investigation was biased and mean-spirited.

“It was a pathetic waste of government resources to try and convict a man who had never been in trouble with the law in his entire life and is a hero for coming up with a new way” to connect urban consumers with a family farm, Reynolds said.
(source)

With their hands tied…

The state did virtually everything they could to cripple the defense before the trial even started.

From David Gumpert’s account of the trial, we read:

Yes. You read right. In a trial about raw milk, the words “raw milk” were not even allowed to be used.

In fact, every time the words “raw milk” are about to come up during the proceedings, the jury is ushered out of the room. It happened Monday morning and again Tuesday afternoon. It would be funny if conviction for Hershberger didn’t mean jail time — for a father of ten children.
(source)

For a taste of just how ridiculously these prohibitions played out in court, David Gumpert gives us this account of the testimony by a defense witness, Joseph Plasterer:

He was asked by defense attorney Glenn Reynolds to explain why he sought out Hershberger’s food back in 2004, when he joined the food club.

Plasterer: “We asked if we could be part of the farm…”

Glenn Reynolds: “Did you have a reason?”

Plasterer: “My son was not thriving…”

Glenn Reynolds: “Explain why you sought out Hershberger’s food.”

Plasterer: “We wanted access to unprocessed food that was higher quality than would not be available from the stores.”

I know it’s becoming increasingly difficult in certain places to access food privately. But illegal to speak of it? That was a new one.

This constant stream of objections? This is what happened at almost every turn, for hours on end, during the trial.

Thankfully, the jury was listening and saw through the prosecution’s shenanigans.

What does this tell me?

That jury trials are the way to go! Our founding fathers knew what they were doing.

It was a jury that upheld private food rights and acquitted Alvin Schlangen last year.

It was a jury that upheld private food rights and acquitted Vernon Hershberger last week.

It also tells me that we need to support the work of the Farm to Consumer Legal Defense Fund. If not for their valiant efforts in both cases, who knows how these trials would have ended?