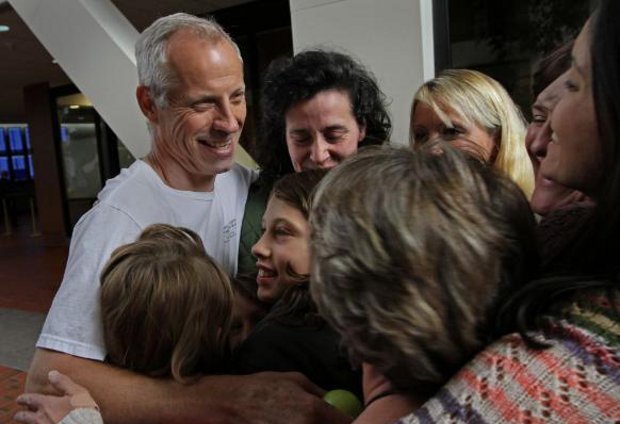 “Praise be to God!” I exclaimed when I read the email. My husband, sitting at his desk on the opposite side of our office looked up from his work and said, “What? What happened?”

The kids were wrestling on the floor, their squawks escalating into shrieking laughs.

Yes, my dear readers, I’ve got GOOD news to share. Alvin Schlangen has been acquitted on all three counts of criminal charges brought against him by the Minnesota Department of Agriculture (MDA) and the Hennepin County prosecutor’s office! Mr. Schlangen is a managing member for the Freedom Farms Coop and was preparing to deliver raw milk to fellow co-op members in March of 2011 when the MDA raided his truck and confiscated his raw milk and food.

Minnesota law allows for raw milk to be sold directly to consumers on the farm in which it’s produced. The MDA charged Mr. Schlangen with selling raw milk off the farm, handling the food without first possessing a food handler’s permit, and distributing misbranded and/or adulterated dairy products. A fourth charge on a labeling violation was dropped at the beginning of his criminal trial.

Mr. Schlangen, however, argued that he was not selling milk or food to anyone. Rather, the co-op leases the animals from a nearby Amish farmer and pays for their care. Any milk or dairy products coming from the herd is already the property of the co-op, so he was merely delivering their own food to them as a voluntary manager of the private club. The same is true of the other foods the co-op purchases together including bison, salmon, and grapefruit among others.

Schlangen said he knew criminal charges were a possibility but is surprised the government is pursuing the case against a small farmer who isn’t producing milk.

“I didn’t think this small farmer with an egg-production unit would get in trouble for carrying my neighbor’s food on a truck,” he said.

Schlangen argues that he’s doing nothing wrong because members of his co-op lease the animals that provide the raw milk, so there’s no purchase or sale.

He said his club is a new design of a food system that “allows the consumer. . .to be involved in the quality of the food they’re getting, and not just settle for what’s there on the shelf.”

As you know, the Farm-to-Consumer Legal Defense Fund is one of my favorite non-profit organizations. It’s dedicated to providing farmers and consumers with the legal help they need to consume the foods of their choice. Both The Fund (as we affectionately call it) and the Weston A Price Foundation provided legal assistance to Mr. Schlangen, essentially bankrolling his defense.

“You’re talking about someone who’s never been accused of making anyone sick,” said attorney Peter Kennedy, president of the legal defense fund. The members of Schlangen’s club arranged for him to deliver food to them.

“They’re happy with what he does for them, and yet the state is trying to get in the way of this private, contractual relationship between Alvin and the members of the food club,” Kennedy said. “It doesn’t really seem like they’re protecting the public health and safety.”

Perhaps one of the most deft moves made by Mr. Schangen’s legal defense team was requesting a trial by jury. Any clear-thinking citizen who sees the private contract drawn up for co-op membership is unlikely to hold the co-op’s delivery guy responsible for criminally re-selling raw dairy and food. Plus, a trial by jury requires a higher burden of proof from the prosecution.

According to Dr. David Gumpert of The Complete Patient:

A jury of six ordinary Americans did something no judge, federal or state, has been willing to do anywhere in the country, whether in New York, California, Pennsylvania, Iowa, Maryland, or Wisconsin — it ruled in favor of a farmer-food club operator providing raw milk and other nutrient-dense foods privately to its members.

And the jurors made their decision to find Alvin Schlangen not guilty of three misdemeanor counts having to do with distributing raw milk and other foods in probably the most food-repressive state in the country: Minnesota.

So, kudos to the Farm-to-Consumer Legal Defense Fund! Kudos to his attorney, Nathan Hansen! And kudos to the fine Minnesotan jury that saw through the anti raw milk hype mounted by the prosecution to the heart of the matter — the state wanted to keep people from drinking milk that came from animals they leased/owned.

Mr. Schlangen faces a second criminal trial in a different jurisdiction, Stearns County, on six misdemeanor counts for alleged violations of the Minnesota food and dairy code. A pre-trial hearing in the case is scheduled for November 2nd.

« Who is Dr. Jill Tieman? Why Should You Care?
GM Corn Health Risks Prompt Russia to Ban Corn Imports »