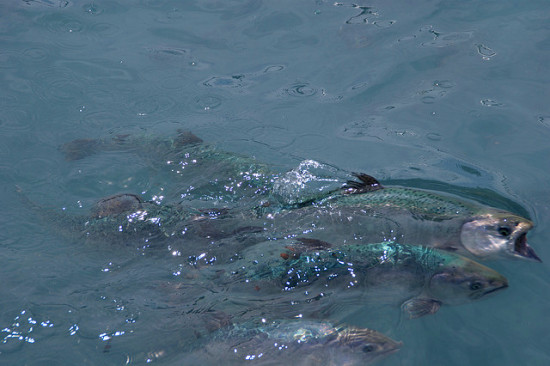 In two weeks, the FDA will hold public meetings to “hear advice” about whether they should approve genetically-modified  salmon. These salmon have been genetically engineered (GE) by AquaBounty Technology to grow at twice the rate of non-GE salmon by forcing the salmon to produce growth-hormone year round. If approved, these GE salmon will be the first ever genetically modified animals to be on U.S. consumers’ dinner plates.

According to press reports, AquaBounty isn’t just growing GE salmon. They’re also growing GE trout and tilapia. And other companies are waiting in the wings to get FDA approval for GE pigs and cows.

In response to this news, a coalition of 31 advocacy groups released a statement, urging the FDA to NOT approve the fish:

Each year millions of farmed salmon escape from open-water net pens, outcompeting wild populations for resources and straining ecosystems. “We believe any approval of GE salmon would represent a serious threat to the survival of native salmon populations, many of which have already suffered severe declines related to salmon farms and other man-made impacts,” Marianne Cufone, director of Food and Water Watch’s fish program said.

If the FDA opens this door, GE fish will likely be among the millions of salmon that currently escape from open ocean pens every year. This could be the last blow to wild salmon stocks and in turn the thousands of men and women who depend on fishing for their livelihoods. “Approving genetically engineered salmon is a sharp contradiction to the agreements the United States has signed at NASCO, where transgenic salmonids are considered a serious threat to wild salmon” said Boyce Thorne Miller, Science and Policy Coordinator for the Northwest Atlantic Marine Alliance and accredited observer at the North Atlantic Salmon Conservation Organization.

Escaped GE salmon can pose an additional threat – genetic pollution resulting from what scientists call the “Trojan gene” effect.” Research published in the Proceedings of the National Academy of Sciences notes that a release of just sixty GE salmon into a wild population of 60,000 would lead to the extinction of the wild population in less than 40 generations.

Okay, so GE salmon is bad news. You knew that. But guess what? Despite the FDA’s desire to “hear advice” from the public, it looks as if this is on the fast track to approval:

FDA announced the same day that it will hold a public comment period and a hearing on labeling for the transgenic salmon, which seems to presuppose that the controversial GE fish will be approved. If the GE fish is approved, Agency officials are undecided as to whether they will require any product labeling.

So, these fish won’t just be approved, but possibly not even be required to be labeled as genetically-modified!

Author Marion Nestle had this to say about the FDA approval process:

In the early 1990s, I was one of four consumer representatives on the FDA’s 30-member Food Advisory Committee. This was the time when the FDA was considering approval of the first GM (genetically modified) crops. All four of us voted to delay the decision until more information became available or to make sure that GM foods were labeled as such. Obviously, the FDA did not listen to our excellent advice.

Indeed, when our term on the committee was up, the head of the FDA’s Center for Food Safety and Applied Nutrition explained to us that our committee had not really been advisory. The FDA had already decided the issues that it brought to the committee for discussion. All the agency wanted from the committee was some indication of the kind of public reaction its decisions might raise.

Is this still the case with FDA advisory hearings? I really don’t know, but I hope the FDA will listen carefully to concerns about these fish.