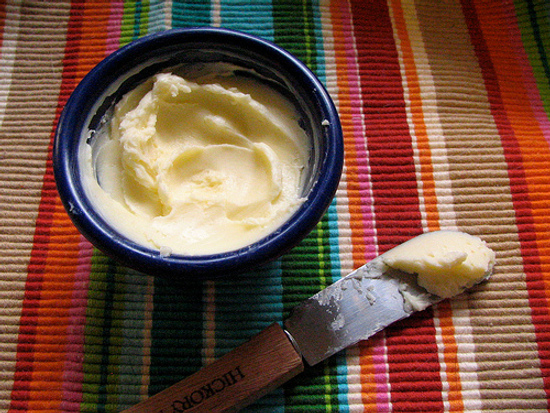 For decades, the USDA food pyramid has been telling us to eat less fat. When they launched their campaign, only 14% of Americans were obese. Today, that number’s at more than 30%, with another 30% of the population being classified as “overweight.”

So what’s wrong? Did the public fail to get the message? Are we all secretly pigging out on high fat foods? Did we all suddenly turn sedentary?

By the late 1990s, more than 90% of American consumers reported eating low-fat products, and roughly two-thirds of us believed “a need exists for food ingredients that can replace the fat in food products.” By all appearances, we embraced the low-fat message with open arms. Yet we still gained weight.

A funny thing happens when you cut fat out of the diet. You want to replace it with something.

Recently, Ode Magazine ran a cover story called “Fat Is Where It’s At,” highlighting the changing tide as scientists have started to recommend higher fat diets. From the article:

So given the blanket condemnation of fat, what did we eat instead? If we cut fat out of our diets, we have to get calories from somewhere. When food companies offer reduced-fat versions of cookies, salad dressings and sauces, sugar and carbohydrates generally make up the difference. When we consciously reduce the fat in our diets, we don’t typically eat fewer calories; we eat more rice and pasta, according to a survey by the U.S. Department of Agriculture. And low-fat products have their own problems. “If you reduce the fat, you have to replace it with something,” says Samuel Klein, a professor of medicine and nutrition in the medical school at Washington University in St. Louis, Missouri. “So it’s sugar.” It’s true: Either for taste, or to replace fat’s richness and moistness, the food industry began using sugar.\r\n\r\nBut as researchers studied fat and weight, they learned more about the effects of sugar, which as it turns out may inspire more weight gain than fat does. When we eat sugar—or refined carbohydrates, which break down into sugar—the body produces insulin to transport the sugar to the muscles and organs that burn it as fuel. Insulin, though, also regulates fat metabolism, and when insulin levels are high, the body stores fat rather than burning it. The issues and consequences of producing too much insulin are still open to debate, but many researchers believe that replacing fats with sugars and carbohydrates has the potential to wreak havoc on your metabolism. And ironically, even sugar substitutes, like aspartame, the sweetener in NutraSweet and Equal, have been linked to weight gain. Scientists aren’t sure why, but they seem to encourage people to eat more, or disrupt energy expenditures.

So now the scientific community is starting to backtrack. They’re finally starting to own up to the fact that not all fat is bad.

Check out these prime quotations from the Ode article:

–”Regularly described as the nutritional equivalent of cigarettes, fat has been the target of public-service campaigns and municipal bans aimed at keeping us slender and healthy. But a growing body of international research suggests our obsessive fear of fat may be misplaced. A high-fat diet won’t necessarily make us sick or fat; a low-fat diet may not make us healthy or slim.“

–”Even the American Heart Association (AHA), a leader in the campaign against dietary fat, recently revised its nutritional guidelines, increasing the daily recommendations for fat. “The science just wasn’t there,” acknowledges Robert Eckel, president of the AHA and a professor of endocrinology, metabolism and diabetes at the University of Colorado Health Sciences Center.”

Personally, I love fat. It makes everything taste better and keeps me full. In order to get the proper balance of fats necessary for a healthy liver & heart (an Omega 6 to Omega 3 fatty acid ratio of 4:1, for starters), I try to get my fat from traditional sources. This includes butter from grass-fed cows, tallow and lard from grass-fed, wild, foraged animals, and quality olive and coconut oils.  I drink full-fat milk raw from grass-fed cows, don’t shy away from cream or sour cream, and enjoy bacon grease.

Roughly 55-65% of my daily calories come from these fats, and I’ve never been healthier. I’ve lost weight, eliminated mood swings, and said goodbye to fatigue. 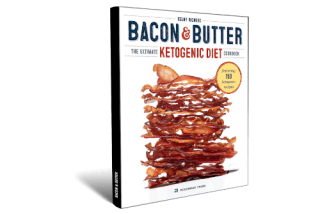 With this New York Times bestselling book, you’ll begin dropping pounds immediately — and learn how to keep them off for good — by following a low-carb, high-fat ketogenic diet packed with tasty, wholesome meals that you’ll love.

It’s the simplest way to get started, and at the moment, the printed version of this cookbook is 100% free to Food Renegade readers. You just pay shipping & handling.

I owe Fight Back Fridays participant Charles Welling a hardy Thank You for the heads up to the Ode Magazine article.