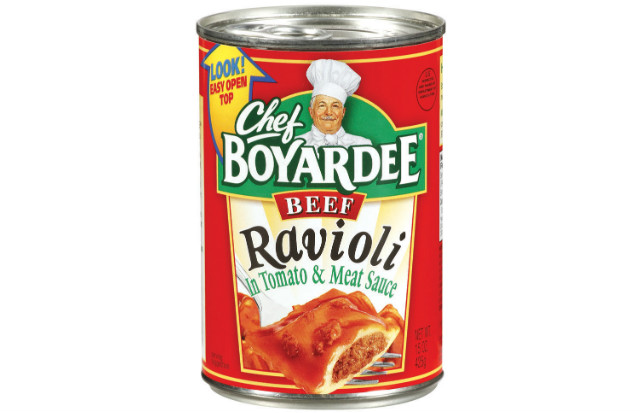 Have any of you noticed that our definition of “junk food” has narrowed over the course of the last few decades? The average young parent these days will tell you that they don’t feed junk food to their child, but they’ll still drive them through a fast-food joint once a week.

They’ll tell you that they don’t feed their children junk food, but they’ll still give their kiddos macaroni and cheese and corn dogs for dinner.

They assume that junk food is only stuff like candy or sugar-sweetened snacks. Fried chicken, pizza, hamburgers, mac & cheese — none of these are considered junk food anymore. Because of that, they’ll happily open a can of Chef Boyardee Beef Ravioli for their kiddos and be proud of the fact that it’s well-balanced. It’s a serving of vegetables, meats, and grains all wrapped up in an easy package.

Here’s what the manufacturer claims:

“It’s a full serving of vegetables with no preservatives.”

Tomatoes & Water are the first ingredients. Given that this is a canned pasta in sauce, that’s actually pretty good. Are the tomatoes organic? No. Were they likely grown in nutrient-depleted sand rather than actually fertile soil? Yes.

Enriched Wheat Flour and Cracker Meal make up the bulk of this food, and are likely the primary ingredients of the pasta itself. Unfortunately, these are refined flour. So, not only are they not whole grains, but they’re also not traditionally prepared. (For more on traditional grain preparation techniques and why they’re superior, read How to Eat Grains).

Beef is the next ingredient. Unfortunately, this is beef that’s been finished in feedlots. Animals finished in Confined Animal Feeding Operations are a sad example of animal husbandry. Not only are the CAFOs themselves destructive to the environment, but the animal foods they produce are far less healthy for you. Rather than derail this post, may I suggest that those of you interested in a discussion of how to eat HEALTHY, humanely-raised animal foods read my post Healthy Meats: What to Buy?

Soybean Oil is almost certainly from genetically-modified soybeans. It’s marketed as a healthy oil, but it simply isn’t. That’s because it’s new.

You see, prior to the industrial revolution, making seed-based cooking oils was far too labor intensive and (in many cases) downright impossible. All the ancient cooking oils (like coconut oil, palm oil, olive oil, etc.) are easily pressed out of the plant without needing extremely high-pressure or high-temperature extraction.

After the industrial revolution, we had the technology necessary to create modern seed-based cooking oils. So, we did.

But the process of making and refining these oils translates into one thing: rancid polyunsaturated fatty acids (PUFAs). PUFAs don’t hold up well to heat or pressure. Soybean oil is roughly 58% polyunsaturated fatty acids — nearly twice that of canola! So, in the process of being extracted from the seed, these oils oxidize and many of them plasticize (turn into trans fats). The end result is stinky and unappetizing, so the oil is further “cleaned” using bleach or alternative chemicals to deodorize it.

Salt is the next ingredient, and it isn’t the real sea salt that your body flourishes on. Rather, it’s the standard table salt that’s been refined so that it’s other trace minerals are absent. This highly isolated form of sodium chloride is what’s linked to increased risk of heart disease, and there’s a surprising amount of it in this food.

Textured Vegetable Protein is a cheap meat-substitute made out of soy. Unfortunately, this kind of processed soy is extremely unhealthy. For more on this, see Dangers of Soy.

Carrots and Onions are rather self-explanatory, so that brings us to Modified Corn Starch. Like the corn-derived high fructose corn syrup, this almost certainly comes from genetically-modified corn. Yet perhaps the greater hidden danger is that it’s a source of processed free glutamic acids — otherwise known as MSG. (Read more about why MSG is dangerous.)

This, combined with the ever-ambiguous Flavorings, does not bode well. That’s because Flavoringsc can hide MSG!

Unfortunately, it’s perfectly legal for a company to say their food product has “No added MSG” so long as they don’t add an ingredient called “monosodium glutamate” to their food. MSG, however, hides in more than 40 commonly used ingredients in industrial food — ingredients like flavoring. This means MSG can sneak up on you in a whole host of foods that don’t technically have a single ingredient called monosodium glutamate listed on their label. (source)

For more on where MSG may be hiding in your food labels, I’ve created a handy, downloadable, easy-to-print guide for you.

Enzyme Modified Cheese is just what it sounds like — “modified” cheese. The cheese obviously isn’t from grass-fed cows, which means that it comes from an industrial dairy where cows can be routinely treated with hormones and often have persistent, low-grade mastitis (resulting in a lot of PUS in the milk). For more on this, read Healthy Milk: What to Buy. It’s also been modified with thickeners, emulsifiers, and colorants.

And finally, that Caramel Coloring and Citric Acid is most likely derived from genetically-modified corn.

This is a no brainer!

What should I eat instead?

There is no easy way around this. If you want ravioli without any compromises at all, you have to make it yourself. My absolute favorite recipe is Kelly the Kitchen Kop‘s Butternut Squash Ravioli. It’s dreamy.

For a good pasta dough recipe, along with a fantastic visual tutorial for how to make and stuff ravioli, I like Food Loves Writing‘s Homemade Einkorn Ravioli.

Yet making your own pasta can take a long time. If that’s the case, and you’re looking for a convenient, store-bought ravioli, then there are a lot of options. You just have to weigh what compromises your family is willing to make.

Want something absolutely wheat-free? Then buy a gluten-free ravioli like this one.

Don’t care about the wheat so much, but want to ensure the eggs used are free-range and the cheese used is from cows raised without hormones? Then you’re more likely to pick up an all-natural ravioli like this one.

In this series on Decoding Labels, I’m highlighting deceptive labeling practices, hidden ingredients, and more! If you’ve got a particular label pet-peeve you’d like me to share, please feel free to email me with your idea. It may just turn into a blog post!