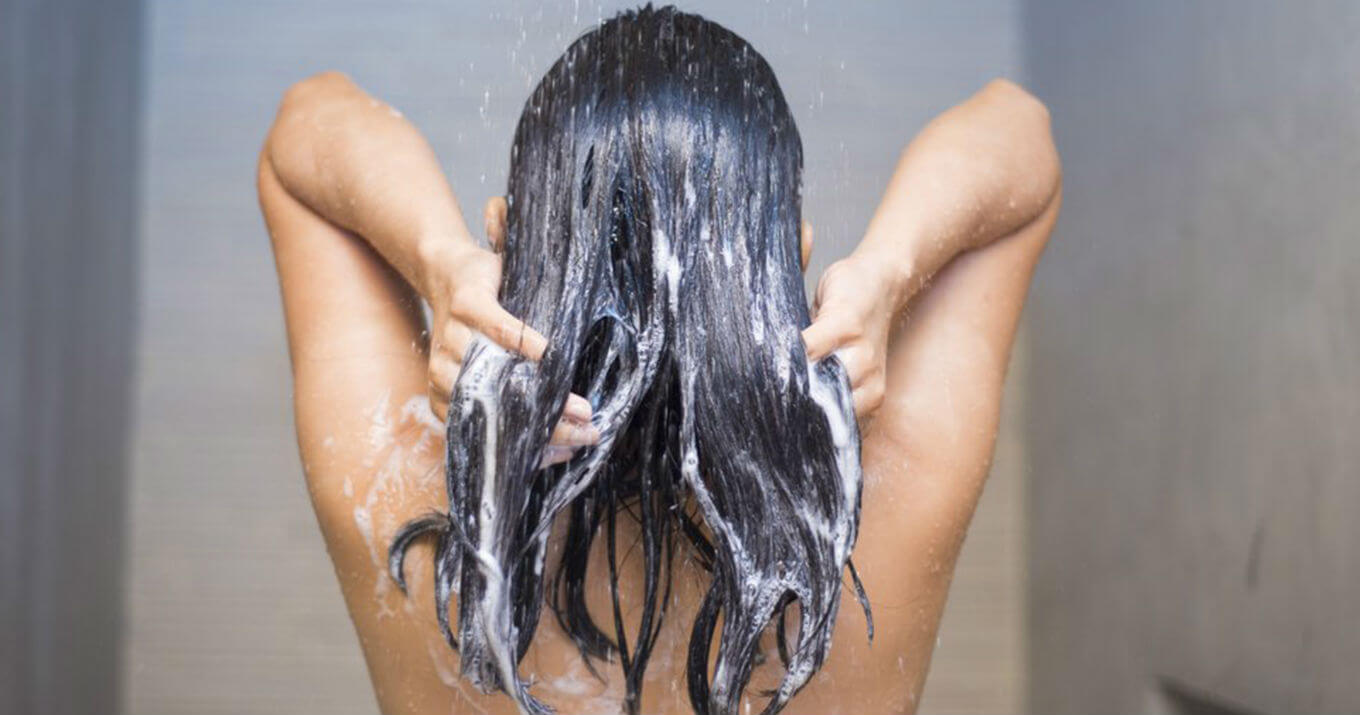 It makes intuitive sense that drinking chlorinated water can create imbalances in your intestinal flora. We know we chlorinate our municipal water supplies in order to disinfect the water and kill off microbial growth. We even know that drinking chlorinated water alters the balance of gut bacteria in rats. It makes sense that chlorine will kill many of the good bacteria and microbes that live symbiotically with us in our gut. These good bacteria help us digest our food, keeping us serene and healthy. But most of us fail to take this thought to it’s logical end. I know I did.

You see, I thought that if I just drank filtered water, I’d have my bases covered. It never even occurred to me that the chlorine in my shower and bath water could be just as damaging, if not more so. That’s because your skin is your largest organ, and it’s naturally gifted with the ability to absorb both nutrients and toxins.

Chlorine from drinking water can enter your body in several ways, including ingestion. You also inhale chloroform, a byproduct of chlorine, when you take a hot shower or bath. According to an article from Science News, researchers found increases in chloroform in study participants’ lungs of about 2.7ppb after a 10-minute shower. Warm water also further opens pores, so the combination of what your skin absorbs and your lungs inhale during a 10-minute shower is greater than the amount you would ingest drinking eight glasses of water from the same tap. In fact, studies at the University of Pittsburgh found less chemical exposure from ingesting chlorinated water than from showering or washing clothes in it. The study found that, on average, absorption through the skin was responsible for 64 percent of waterborne contaminants that enter the human body.

Even the EPA’s own scientists agree:

There is a lot of well founded concern about chlorine. When chlorine is added to our water, it combines with other natural compounds to form Trihalomethanes (chlorination byproducts), or THMs. These chlorine byproducts trigger the production of free radicals in the body, causing cell damage, and are highly carcinogenic. “Although concentrations of these carcinogens (THMs) are low, it is precisely these low levels that cancer scientists believe are responsible for the majority of human cancers in the United States“. The Environmental Defense Fund

Simply stated chlorine is a pesticide, as defined by the U.S. EPA, who’s sole purpose is to kill living organisms. When we consume water containing chlorine, it kills some part of us, destroying cells and tissue inside our body. Dr. Robert Carlson, a highly respected University of Minnesota researcher who’s work is sponsored by the Federal Environmental Protection Agency, sums it up by claiming , “the chlorine problem is similar to that of air pollution”, and adds that “chlorine is the greatest crippler and killer of modern times!”

Breast cancer, which now effects one in every eight women in North America, has recently been linked to the accumulation of chlorine compounds in the breast tissue. A study carried out in Hartford Connecticut, the first of it’s kind in North America, found that, “women with breast cancer have 50% to 60% higher levels of organochlorines (chlorination byproducts) in their breast tissue than women without breast cancer.”

One of the most shocking components to all of these studies is that up to 2/3s of our harmful exposure to chlorine is due to inhalation of steam and skin absorption while showering. A warm shower opens up the pores of the skin and allows for accelerated absorption of chlorine and other chemicals in water. The steam we inhale while showering can contain up to 50 times the level of chemicals than tap water due to the fact that chlorine and most other contaminants vaporize much faster and at a lower temperature than water. Inhalation is a much more harmful means of exposure since the chlorine gas (chloroform) we inhale goes directly into our blood stream. When we drink contaminated water the toxins are partially filtered out by our kidneys and digestive system. Chlorine vapors are known to be a strong irritant to the sensitive tissue and bronchial passages inside our lungs, it was used as a chemical weapon in World War II. The inhalation of chlorine is a suspected cause of asthma and bronchitis, especially in children… which has increased 300% in the last two decades. “Showering is suspected as the primary cause of elevated levels of chloroform in nearly every home because of chlorine in the water.” Dr Lance Wallace, U.S. Environmental Protection Agency.
(source)

As the implications of that promise have unfolded, I’ve since become someone who doesn’t use deodorant or perfumes, doesn’t wear makeup, and doesn’t use inedible soaps. While that description may make some people imagine a barefoot hippie who smells like patchouli or lavender oil, I promise I fit in fine with my fellow suburban moms.

I never considered the water I was bathing in a health hazard.

For some reason, my brain refused to put two and two together and get four. Only yesterday, when I was talking with Kathy (co-owner of Radiant Life with her husband Norm) did it all click into place.

You see, Kathy shared an anecdote that I had to try out for myself. She said, “Listen, if you don’t believe that your skin not only absorbs the things you come in contact with but that these can also enter your digestive system, just try this little experiment. Place a mashed garlic clove in your shoe and see how long it takes for you to taste it.”

It took less than ten minutes.

Tell me. How is this possible?

Until recently, scientists thought of the skin as being a total barrier. Now, thanks to the research leading to the application of transdermal patches for administering therapeutic drugs, we know that the skins permeability has to do with molecular weight.

Scientists have graded the Hydrogen atom as 1 for molecular weight and have discovered that any molecule below 3000 can enter the skin, below 750 can enter the skin cell, and below 150 can enter into the bloodstream. This discovery is being used increasingly with the introduction of transdermal patches like Nicotine, HRT and pain relief. They are popular because entry through the skin bypasses the stomach where many drugs can be altered by the stomach acid.
(source)

In other words, anything that has a low enough molecular weight can be absorbed by the skin. Anything with a molecular weight below 150 can enter directly into your bloodstream from the skin!

Guess what the molecular weight of chlorine is?

No wonder that study at the University of Pittsburgh found that you are more at risk from showering in chlorinated water than you are from drinking it.

So, what can you do about it?

The most obvious solution is to filter the chlorine out of your water. You can spend a lot on a whole house filter that will do this and remove the chlorine from your drinking water, your laundry water, and your bath water. Or, you can opt for a quick fix, particularly if you’re already drinking filtered water.

Thankfully, they’ve invented relatively inexpensive de-chlorinating filters that fit on your shower heads or can hang under your faucet while you’re running bath water. 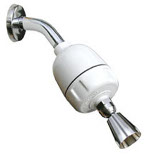 For showers, I recommend the Rainshow’r Shower Filter ($45). It’s simple to install and it uses “the most potent KDF filter material on the market, which changes chlorine into a harmless, biodegradable compound. This is also the only filter to include Crystalline Quartz technology, in which specially-cured crystals act upon the water to create a softer, more energized shower feeling, as well as improved lathering and sudsing.” I just bought mine from Radiant Life today, and I’ll let you all know if it lives up to its reputation. 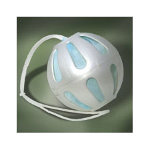 For baths, I’m buying this Crystal Bath Ball Dechlorinator ($42). It hangs under your faucet and dechlorinates the water as it passes through.

This is particularly important for infants and young children! I spend so much time and energy making sure my little ones are building up a healthy colony of intestinal flora — feeding them yogurt, sauerkraut, raw milk, and a host of other probiotic, living foods. Why would I toss all that down the drain by letting them bathe in chlorinated water?

(where to find dechlorinating bath filters)

Where to Buy Dechlorinating Shower Head and Bath Filters

If you want to buy dechlorinating filters — either for your whole house, your drinking water, or just for your bath water — check out the listings here.

(photo by MosayMay on Shutterstock)