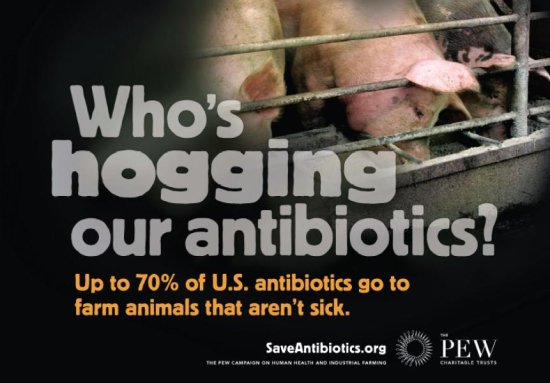 Large-scale industrial farming of animals relies heavily on antibiotics. I’d go so far as to say that it wouldn’t be possible without the regular administration of antibiotics on relatively “healthy” animals. Otherwise, how else could they get away with crowding the animals into facilities that are sanitation nightmares? According to a new ad campaign launched by the Pew Charitable Trusts, up to 70% of antibiotics used in the U.S. go to farm animals that aren’t sick.

Overuse of antibiotics stimulates the growth of deadly strains of antibiotic resistant bacteria, so these farming practices are jeopardizing the effectiveness of antibiotic drugs. Many predict that we’ll look back on this era of effective antibiotics as a sort of “golden age” — a time when we lived without fear of most infectious diseases, ever confident that antibiotics would save us from any real harm.

Thanks to irresponsible farming practices, this golden age is coming to a swifter end. And now you have the chance to do something about it.

There are several healthcare and food safety reform bills going before congress right now, but HR 1549 and S 619 (known as the Preservation of Antibiotics for Medical Treatment Act) will limit the use of antibiotics in animal agriculture to treating diagnosed diseases.

Why You Should Care About The Overuse of Antibiotics

From the Pew Charitable Trust’s Save Antibiotics campaign site, we learn:

What You Can Do

If you are U.S. voter, contact your representatives and senators and tell them that you support PAMPTA. And don’t just send an email. Making a phone call will take less time than writing something thoughtful, and will be a hundred times more effective.

This is your chance to create REAL dent in the abuses of our food industry. As I said before, the current system can not survive if the use of antibiotics is restricted to only sick animals. If we successfully limit the use of antibiotics in industrial animal production, we will change the face of factory farms in this country!

Not only that, but we will help ensure the efficacy of antibiotics to treat potentially life-threatening infections in you, your children, and your grand children.

This post is part of today’s Real Food Wednesday blog carnival. For recipes, tips, news and stories about Real Food, go check it out!

« Natural Sunscreen Ingredients You Can Put On Your Skin
Healthy Cheese: What to Buy »