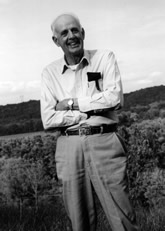 I *heart* Wendell Berry — an agrarian poet and farmer bent on asking and answering some of the most potent questions we’re faced with in today’s world.

His work regularly points out the divide between consumer and producer, city and country. These divides violate something Berry holds dear — relationships. Almost all of Berry’s work centers on our relationships with the people and land around us.

Most people in the U.S. have no relationship with those who produce their food. We’re a culture that’s divorced from the concepts of sowing, waiting, reaping, and enjoying the fruits of our labor. We’re divorced from the care, nurturing, and compassionate slaughter of animals that we eat.

According to Berry, this affects not only the quality of our meals (and by extrapolation, the health of our bodies), but also the health of our souls. I recently came across an old interview of his at Heifer International, and wow. WOW. It’s like he eats, sleeps, and breathes wisdom.

Check out this morsel:

WA: Do you think that the main problem of industrialization is that it is isolating? That it removes people from the causes and effects of their actions, and contributes to neglect?

WB: No, the main problem is the permanent depletion of resources. We’ve burnt fossil fuels at an astonishing rate. I’ve lived through the burning of nearly all the petroleum that has been burned, and that’s about half of it. And industry’s use of the fossil fuels has sort of been the pattern for its use of everything else. We’re using up topsoil as if it were not a one-time supply, as if it were an inexhaustible resource. The industrial economy has made lots of estrangements and divorces. It has divorced people from the land because it needed to shift them around. It needed a labor supply, and it didn’t believe it needed people on farms. So you had factory centers that drew people in by depreciating their economies at home and appreciating the economies somewhere else.\r\n\r\nIndustrialism also separated utility and beauty. If a thing was functional, it didn’t make any difference how it looked, and I think you can go only so far with that. If a thing is ugly, I think we need to ask questions about it. How did it get that way? What else is wrong? We know that a great ugliness has accompanied industrialization. I’ve read that the mill towns in England were beautiful as long as they were water-powered because the mill owners lived in the towns. And so for their own pleasure, they saw that the towns looked good, with shade trees and fl owers and that sort of thing. When they started running on steam, using coal, the coal smoke blackened everything and ruined the air. The owners moved away. And that removed any effective motive to make the towns beautiful. The owners’ living circumstances then were separated from the workers’ circumstances. Another disastrous divorce. Industrialization functioned as a way to siphon the wealth of the countryside into the pockets of owners and investors as quickly and cheaply as possible. Caretaking has not been a part of the deal at all.

We’ve reconciled ourselves to this destructiveness and adapted our lives to it, so that now we’re utterly dependent on destruction and the services and amenities have declined. My great-grandfather had better public transportation than I do, and better mail service.

WA: Today, so much of the effect that our consumption has on the world happens without us knowing. Is it important for us to actually see our personal give-and-take with our environment, our effect on the world?

WB: It’s important at least that we understand our economic relation to the world, the way we live from it, the way we do or don’t take care of it. I think the conservation movement unwittingly helped to drive a wedge between us and our land by implying that we could live most of our lives in circumstances that don’t quite suit us — doing work that doesn’t suit us, work that makes us say, Thank God it’s Friday — and then somehow, on vacation, go to a national park and reconnect with the natural world. But of course that’s not a connection.

WA: It’s a way of thinking that treats the natural world as a precious object, not a part of everyday life.

WB: These people get in their cars and go west across Kansas, which feeds them, and they never look at it, because their chins are on the dashboard looking for the Rocky Mountains. Wes Jackson has watched them doing that. No snowy peaks in Kansas. My own testimony about this is that I know we can connect to nature in a better way. You don’t have to go to the Rocky Mountains to confront nature, to learn from it and ask the necessary questions. If you go to a good farm that has been properly and gracefully fitted into a place, then you can see that real questions about the terms on which we live have been asked, and answered.

Suppose a family in Louisville is connected with a CSA [community-supported agriculture program] out here. We don’t have any great stands of old-growth timber around here, no great wilderness, no high waterfall, no snow-capped peak, but say that this family would come out, by invitation of their farmer, and have a picnic in the woods on her good farm. And they would see where the food is coming from while they’re there. They would see that you can have a nice outing even in such ordinary countryside as that. They would see how you can live in a place like that, and that living there requires respectable intelligence. And it seems to me that in their minds the breach between the city and the country would begin to heal.

Go read the rest of the interview. Or better yet, check out The Unsettling of America — Berry’s Sierra Club classic that’s as relevant today as it was 25 years ago.