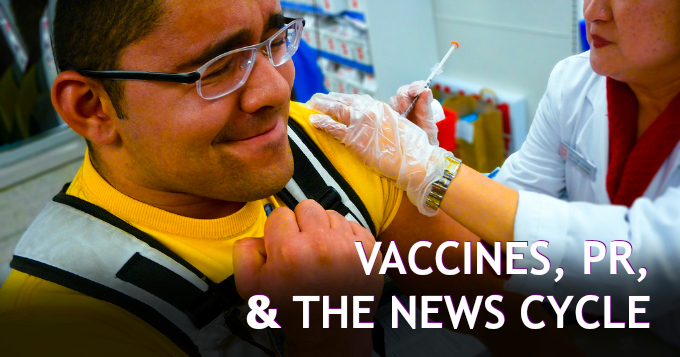 I recently met a young woman who works in public relations. As a creator of online content and a social media maven myself, I did what came naturally. I picked her brain about how PR works these days.

What I learned disillusioned me. If you don’t think you’re ready to come down this rabbit hole with me, I suggest you stop reading now.

I don’t want to sound scary, just realistic. What you’re about to read is an inside look into how modern PR practices manipulate the public through the news. Finding out you’ve been manipulated is never fun.

It happens when paid social media management people from PR firms troll influencers online and anonymously ask questions or leave comments that plant doubt in the minds of their readers.

How can you tell if it’s astroturfing or real people?

It’s hard to discern paid astroturfing from real users of online media, but one way it becomes obvious is when it happens everywhere all at once. Then you can guess with a modicum of certainty that it is coordinated and planned.

According to my new PR friend, astroturfers are also taught to use psychologically jarring words and turn arguments against people rather than ideas and facts. So they’ll throw out inflammatory language like “quack,” “lies,” “conspiracy,” and “psuedo.”

Not only will they use this highly-charged emotional language, they’ll attempt to distract readers by derailing conversations and straying off-topic to do so.

In her ten minute TED talk below, veteran journalist Sharyl Attkisson exposes how astroturfing works and even uses a couple real-life examples:

Is this for real? Doesn’t it seem conspiracy theorist?

I thought so, too.

A month ago I would roll my eyes whenever I heard my blogging peers mention the idea of “paid internet trolls.” I knew they were out there, but to believe they were HERE on MY FACEBOOK PAGE and MY BLOG just seemed ludicrous.

I didn’t know just how widespread they are.

My new PR friend shattered that illusion. They are legion.

According to her, every PR firm worth its salt has them or knows where to find them. In the large firms that tend to represent corporate, political, or celebrity interests, there are entire divisions of hundreds of interns dedicated to monitoring and influencing online media — doing everything from leaving comments on blogs and news sites to harassing users on Twitter, from leaving a string of hostile anonymous asks on Tumblr blogs to charging headlong into Facebook discussions.

Hundreds. In each PR firm.

Each person putting in a full 8 hours a day doing nothing but sowing doubt, confusion, and discord.

Seeding is when the PR firms plant stories with news outlets and online influencers with the end goal of those stories slowly transforming the narrative.

It can be done when a major shift/event is planned (usually up to a year or more out) and you want public perception to be favorable, or it can be done when you need to draw attention away from or bury an unfavorable news story.

Seeding takes many forms, and can be planned up to a year in advance.

According to my PR friend, almost all our news is manufactured. Apparently, very few journalists do investigative journalism any more. Most are fed stories from publicists.

For example, in 2005 the National Sleep Foundation issued a press release about the results of a recent study on sleep that they’d done. Every major news outlet except one simply reported the press release without question with tantalizing headlines like, “Insufficient Sleep is a Public Health Epidemic.” CBS reporter Sheryl Attkisson did a minor amount of research and found out that the non-profit that had funded the survey was in fact funded by a company set to release a new sleep drug for insomnia.

Sometimes, seeding takes the form of a planned multi-year campaign meant to change the public narrative about an issue. In those cases, publicists will seed everywhere.

What does a year long seeding campaign look like?

My friend confided that she’s currently seeding for a lesbian actress who’s going to come out this year.

They’ve been seeding the idea that this celebrity’s gay for about 5 or 6 months now — arranging for her to be papped in public with another female on multiple occasions (even though all they’re doing is grocery shopping or walking down the street), seeding stories in tabloid news outlets that she may be in the closet, and generally getting her fans to start talking about and accepting the idea that she’s gay.

The whole thing is planned out and is meant to build sympathy with her fans so that when she comes out their response will be an elated “I KNEW IT!”

And this is a year long strategy, with seeding planned on four consecutive three month push-pull cycles. (PUSH is when they push a story to the influencers, and PULL is when influencers have eaten that story up and are begging for more information.)

Okay… So MAYBE this is believable. But it can’t be all that widespread or we’d have noticed it right?

News is news. Facts are facts. THOSE PEOPLE WERE PHOTOGRAPHED!

Unfortunately, we’re quite gullible. Take celebrity paps as an example.

It never occurs to us that normal people aren’t hanging out in grocery stores with DSLR cameras ready to “accidentally” take “candid” high quality photos of our favorite actress buying organic tomatoes with a woman.

It never occurs to us that we’re being set up, that candids are staged. That the celebrity also happened to be carrying STARBUCKS branded drinks with the logo conveniently displayed never raises our eyebrows.

This is not an ad. This is one of the most recognized names on the planet (Harry Styles, frontman for the most popular band on the planet, One Direction) supposedly being caught unawares walking down the street with a product placement: 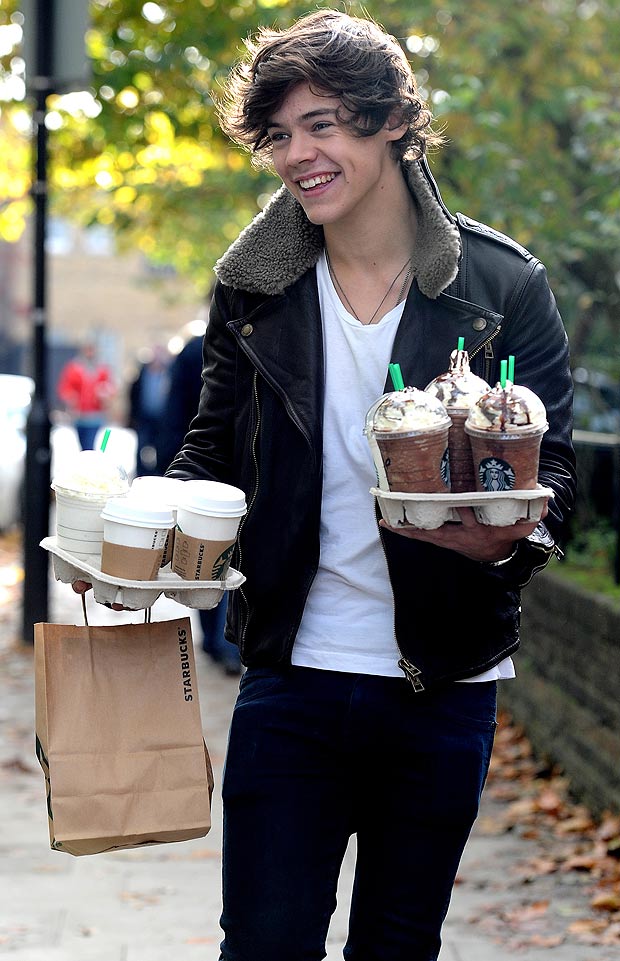 (Ahem. Forgive the One Direction reference. I kinda loathe pop music, but there’s no denying that they’ve had their first 4 consecutive albums debut at #1. Not even the Beatles managed that.)

So that happened once. So what? Starbucks is popular!

But it’s also true that paparrazzi go where they’re called. That’s because that’s how they make money and establish a good working relationship with various PR agencies. If they happen to catch a compromising photo that wasn’t staged, do you know what they do? They sell it to the PR agency and it gets buried.

Stories don’t make the news unless the publicist wants it to, period.

The ONLY exceptions are the rare, totally underpaid, few and far between investigative journalists who still uncover actual scandals (not staged mini-scandals that are meant to cover up bigger ones).

And so you can suddenly start discerning a pattern. Apparently no one is immune from the staged Starbucks pap: 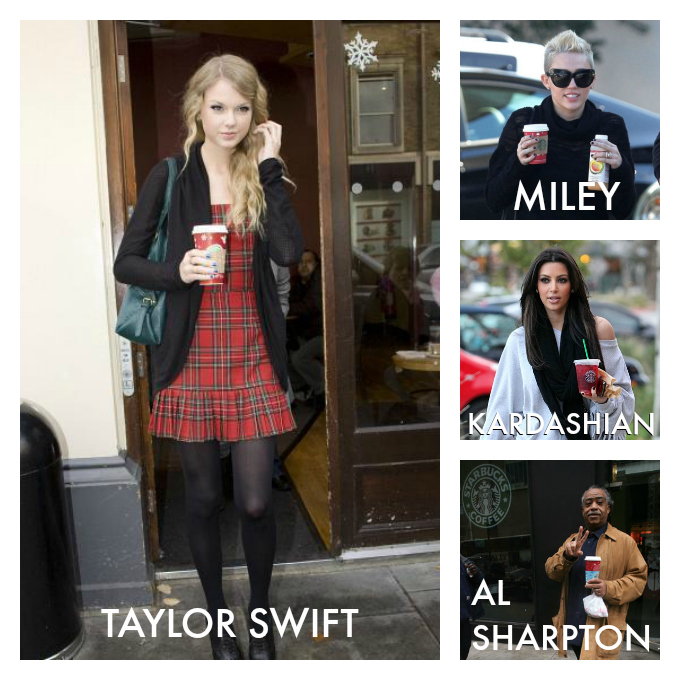 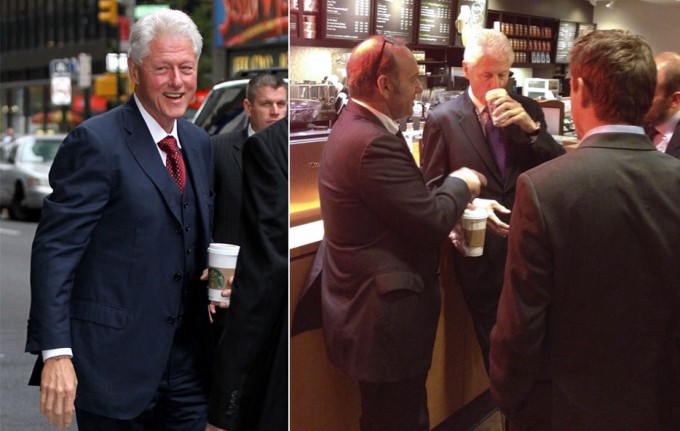 Anyhow, the only point here is: you get this news because a publicist fed it to you.

So, let’s take a look at the national news headlines of the past week.

This is a random sampling from places like NPR, US News & World Report, the Atlantic, and the Washington Times and spans about 4 days of news stories: 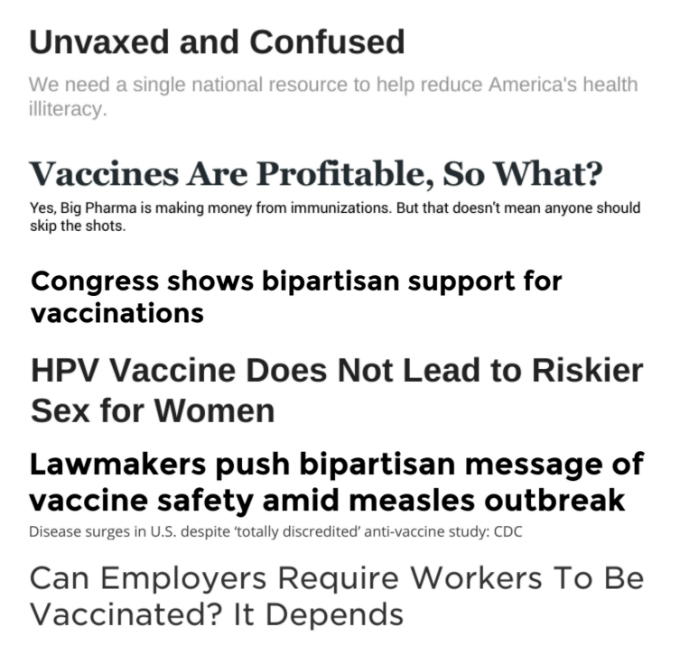 There are hundreds more. Hundreds. Everyone is running with these stories.

Here are some interesting facts to consider:

I say this not to ridicule for-profit industries, but to assure you that these pharmaceutical companies have a massive public relations team. There is no way they don’t.

2. In the last quarter of 2014, there was an under-reported story about how a judge ruled that two whistleblowers within Merck & Co. had adequately proven that Merck & Co. may have lied to the U.S Government about the efficacy of its mumps vaccine. Also under-reported was a story about a whistleblower within the CDC who will testify that the CDC covered up evidence linking the MMR vaccine to autism.

3. And now, in the first quarter of 2015, we get this flurry of news supposedly spurred on by a minor outbreak of measles.

4. We’ve also seen several states simultaneously introduce legislation that would restrict or altogether eliminate a parent’s right to exempt their children from vaccinations (even for religious reasons). You can see if you your own state is one of them by clicking here.

I also suggest that if you think that maybe vaccines should be mandatory, you read this post my friend Heather at Mommypotamus published today: Should Vaccines Be Mandatory? And if you feel really adventurous, go check out the Facebook discussions that post is generating on her page and see if you can spot the astroturfing comments.

Now, given what you now know about PR and seeding, what are your thoughts on these headlines?

Draw your own conclusions.