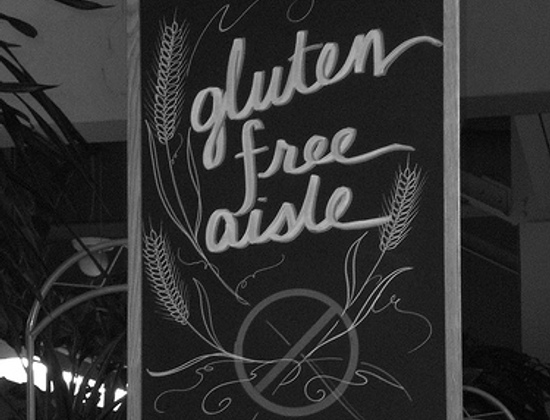 I have this conversation at least once a week.

Someone who knows I’m a nutrition & wellness coach approaches me saying, “Is it just me, or are a lot more people becoming gluten intolerant? Is this just a fad, or is it really on the rise?”

Surely you’ve noticed it, too. More parents are experimenting with gluten-free diets for their families. More people announce they have a gluten-intolerance, despite not being tested by physicians or having a “real” diagnosis. And, when you read the words “gluten-free” in a recipe or on the packaging to baked goods, you think: “YAY. It’s healthy!!”

First, let’s be clear about what gluten intolerance is. It isn’t a food allergy. It’s a physical condition in your gut. Basically, undigested gluten proteins (prevalent in wheat and other grains) hang out in your intestines and are treated by your body like a foreign invader, irritating your gut and flattening the microvilli along the small intestine wall. Without those microvilli, you have considerably less surface area with which to absorb the nutrients from your food. This leads sufferers to experience symptoms of malabsorption, including chronic fatigue, neurological disorders, nutrient deficiencies, anemia, nausea, skin rashes, depression, and more.

If you remove gluten from the diet, the gut heals and the myriad of symptoms disappears. Depending on the level and degree of the intolerance (which can range anywhere from a gluten sensitivity to a full-blown celiac disease), it may be possible to eventually re-introduce properly prepared grains (sourdough that has fermented for up to a month, sprouted grains, etc) into the diet.

Others are not so lucky. Their guts may heal, but their bodies will never be able to digest gluten — even if it’s been “bent” by traditional preparation methods (see below). They have a genetic pre-disposition that causes gluten-sensitivity.

We all know a genetic-predisposition doesn’t mean that developing a disease is written in stone. Our environment & diet has a lot to say about how our genes are expressed. Chris Masterjohn lists the following theories as possible culprits which increase the likelihood of the pre-disposing genes “turning on”:

I think the greatest weight should be given to his second suggestion, as damaged gut flora is on the rise in our society for a number of reasons. Sugar, alcohol, antibiotics, environmental toxins, and other allergens (like the introduction of GMOs into our food supply within the last 15 years) all contribute to imbalanced intestinal flora which can lead to gluten-intolerance. He continues by making the following suggestions which may help prevent developing a gluten-intolerance:

Waiting to introduce grains into a child’s diet until after infancy, raising children on nutrient-dense diets that include liberal amounts of fat-soluble vitamins (especially vitamin A), and keeping good care of intestinal flora may all help prevent celiac disease and non-celiac gluten intolerance in those who are genetically susceptible.

While not introducing grains to your child’s diet until after infancy & eating nutrient-dense foods are self-explanatory, you may want to know what it means to “keep good care of intestinal flora.” That requires eating more living foods, more fermented foods (like sauerkraut), and possibly taking a high-quality probiotic.

So, is gluten-intolerance on the rise? Or is it just a fad?

Marion Nestle, author of Food Politics and a nutrition and public policy expert, weighed in on the issue recently in this article in the San Francisco Chronicle.

Nestle points out that a real diagnosis is difficult and costly to procure. Here’s her take on the issue:

With diagnosis so difficult, it is not easy to estimate trends. Surveys suggest that 1 out of every 133 people in the general population is gluton intolerant. If so, in a school of 1,330 students, you might expect about 10 to require gluten-free diets.

If you are seeing an increase, it could be because parents whose kids have such symptoms may be experimenting with gluten-free diets. If their kids behave, learn and feel better on such diets, parents may conclude that their kids are gluten intolerant without bothering with invasive and expensive lab tests. But a more likely explanation for the increase is the recent improvement in diagnostic ability. Doctors are more aware of the problem and are testing for it.

I think that while this may account for some rise in the increased rates of people going gluten-free, she’s leaving out a key point: The rise in gluten-intolerance is astronomical.

According to research posted at the Weston A Price Foundation’s website, modern wheat varieties are wildly different than more traditional varieties. In short, modern wheat is simply not the same plant it used to be.

I believe that this, along with our recent and dramatic increases in improperly prepared grain consumption, is what has led to the rise in levels of gluten-intolerance. Gluten-free diets aren’t simply fads; they’re coping mechanisms.

If you still want to eat grain, there is hope.

In the past few years, researchers have learned that the primary culprit in celiac disease and gluten-intolerance is a particular peptide strand in the gluten molecule, not the gluten itself. It is theorized that this peptide strand wasn’t present in ancestral varieties of wheat. And, we’ve also learned that the long, slow ferments necessary for making traditional sourdough breads also severs the bonds of this particular peptide strand while leaving enough of the remaining gluten proteins in tact to achieve a pleasant rise (without gluten, your whole wheat bread couldn’t rise).

In other words, if you suffer from gluten intolerance, it is theoretically possible that AFTER your gut is healed, you could start eating bread again! You’d want to experiment with other, more ancestral grains, and you’d also want to make sure the bread had a long, LONG fermentation (up to a month!) before being baked.

That said, there are still many reasons to distrust or avoid grains.

I’ll go into that in greater detail in a later post, but if you’re a regular reader you know what I’ll highlight: