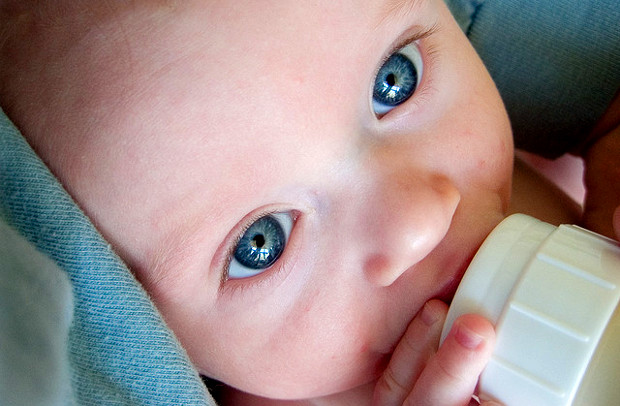 Soy infant formula should only be used as a last resort.

The biggest danger is the phytoestrogens (plant estrogens) found in all soybeans, organic, conventional or GMO. Although phytoestrogens are not identical to human estrogens, they are close enough to cause significant hormone disruption, adversely affecting the infant’s developing body and brain.

According to calculations made by the Swiss Federal Health Service, soy infant formula provides the hormonal equivalent of three to five birth control pills per day. The range is wide because some infants are hungrier than others, but it obviously represents a high dose of estrogen for anyone, and especially for infants whose very development requires the right hormones in the right place at the right time.

Studies on rats, sheep, monkeys and other animals — coupled with growing numbers of reports from pediatricians and parents — suggest that the estrogens in soy infant formula can irreversibly harm the baby’s later sexual development and reproductive health.

According to Iain Robertson, PhD, senior toxicologist at Auckland University Medical School in New Zealand, “infants on soy formula have been identified as a high-risk group because the formula is the main source of nutrient , and because of their small size and developmental phase.”

Bernard Zimmerli, PhD, of the Federal Office of Health in Berne, Switzerland, adds, “The hormonal environment of the newborn child has profound effects on the individual development process.”

Daniel Sheehan, PhD, retired senior toxicologist at the US Food and Drug Administration’s National Center for Toxicological Research, pulls no punches when he states that infants fed soy-based formulas have been placed at risk in a “large, uncontrolled and basically unmonitored human infant experiment.”

What happens to boys put on soy formula?

The soy phytoestrogens can interfere with the testosterone surge that occurs during the boy’s first few months of life. So much testosterone at such a tender age is needed to program the boy for puberty, the time when his sex organs should develop and he should begin to express male characteristics such as facial and pubic hair and a deep voice.

If receptor sites intended for the hormone testosterone are occupied by soy estrogens instead, appropriate development may never take place.

Now that sales of soy formula have been a growth industry for more than 30 years, it is probably not coincidental that pediatricians are reporting greater numbers of boys whose physical maturation is either delayed or does not occur at all. Breasts, underdeveloped gonads, cryptorchidism (undescended testicles) and steroid insufficiencies are increasingly common. Sperm counts are also falling, and sperm quality has also declined.

Soy, of course, is not the only culprit. Environmental chemicals in plastics, pesticides, factory-farmed meats and tap water all play roles in the estrogenizing of our men.

Soy phytoestrogens from infancy also have been linked to rising rates of ADD/ADHD and learning disabilities. Furthermore, deficiency of male hormones impairs the development of spatial perception and visual discrimination.

How might soy phytoestrogens from soy infant formula affect girls?

Besides cutting short childhood, early maturation in girls heralds reproductive problems later in life, including amenorrhea (failure to menstruate), anovulatory cycles (cycles in which no egg is released), impaired follicular development (follicles failing to mature and develop into healthy eggs), erratic hormonal surges and other problems associated with infertility.

As the mammary glands depend on estrogen for their development and functioning, the presence of soy estrogens at a susceptible time might predispose girls to breast cancer, another condition that is on the rise and definitively linked to early puberty.

What does the soy industry say to all this?

It publicly scoffs at the idea of adverse effects and privately fund studies designed to hide the adverse effects of soy. What it doesn’t do — surprisingly enough — is claim high phytoestrogen content in the breast milk of women who consume copious amounts of tofu, soy milk, soy protein shakes and other soy foods. In fact, the evidence suggests phytoestrogens from soy are transferred to breast milk in only minuscule quantities. Although that’s good news for breastfeeding vegans, the bad news is their breast milk will probably show other unwanted effects from soy, including serious deficiencies of B6, B12 and other vitamins; zinc, calcium and other minerals; the sulfur containing amino acids methionine, cysteine and taurine; critical nutrients such as carnitine and CoQ10; and the advanced form omega 3 fatty acid known DHA. The extent of such deficiencies will, of course, depend on what else is in the mother’s diet. While soy milk is often supplemented with calcium and Vitamin D, the calcium is a cheap, hard-to-absorb form and the Vitamin D is not D3 but D2, which has been linked to hyperactivity, heart disease and allergic reactions.

Sadly, infants can readily absorb the phytoestrogens in soy infant formula, a fact that has been proven with numerous studies and led to the warnings from the Israeli, French, German and Swiss governments.

As yet our FDA has declined to warn the public though Dr. Sheehan and other of the agency’s own best scientists have taken strong stands.

Yet another fine scientist is Retha Newbold of the National Laboratory of Toxicology, National Institute of Environmental Health Sciences, who has concluded: “The use of soy-based infant formulas in the absence of medical necessity and the marketing of soy products designed to appeal to children should be closely monitored.”

If you are unable to breastfeed, know that there are other options! For babies that cannot tolerate dairy formulas, there are also other choices available, including a homemade meat-based formula. 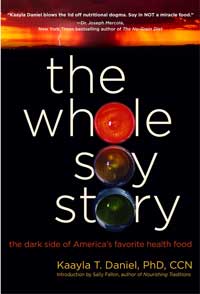 For a more comprehensive discussion and full references, read Chapters 12 and 28 of Dr. Kaayla Daniel’s book The Whole Soy Story: The Dark Side of America’s Favorite Health Food, which has been endorsed by leading health experts including Drs Joseph Mercola, Larry Dossey, Kilmer McCully, Russell Blaylock, Doris Rapp and Jonathan Wright. You may also want to read my Dangers of Soy article summarizing why soy is dangerous.

If you or your children are experiencing health challenges caused by soy infant formula, get Dr Daniel’s free report, “Recovering from Soy.” The link to the free report is on the left hand side of the home page for www.wholesoystory.com.

Dr. Daniel is known as The Naughty Nutritionist™ because she outrageously and humorously debunks nutritional myths, including the myth that soy is a health food. She is Vice President of the Weston A. Price Foundation, a popular speaker at Wise Traditions conferences, a guest on The Dr Oz Show, PBS Healing Quest and NPR’s People’s Pharmacy, and an “Inner Circle” expert with Dr. Joseph Mercola.