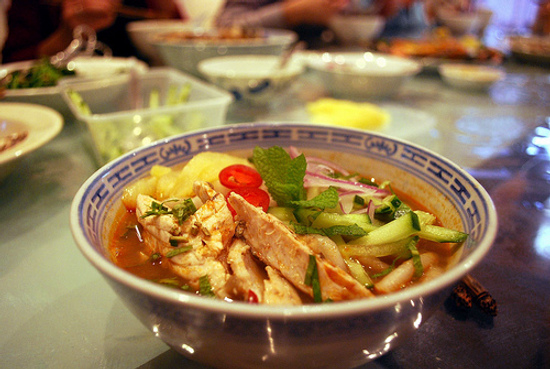 If you haven’t already, don’t forget to enter this week’s Giveaway for a Stackable Sprout Garden!

I remember when Hot Pockets made me salivate. And ranch flavored Pringles potato chips. They don’t anymore.

If you’re at all like me, you grew up eating the standard American diet. In her own small way, your mom probably tried to make “healthy” food choices. In my home, that looked like skim milk, low-fat salad dressings, and chicken — lots of chicken. But we still ate sandwiches starring American cheese and soybean oil mayonnaise, still poured corn syrup over our white-flour pancakes, and drank just about as much Coke as our hearts desired.

Making the transition into eating according to more traditional food ways required not only a perspective altering change in what is and is not considered healthy food, but it also required re-training my taste buds so that the good food actually tasted good — so that it made me salivate.

Looking back now, I cringe when I remember what used to taste good to me. I cringe because there for a while my taste buds had been trained to love the wrong kinds of things. It’s as if I were salivating at the smell of refuse. How could it be that one of my God-given, primal senses was leading me so far astray? I might as well have been blind, or hallucinating. How could it be that something hardwired to help me navigate the world of choosing good foods could be so harmful to me?

Writing about this anomaly in a February 2008 article for Wise Traditions, Katherine Czapp said:

This phenomenon is part of the post-traumatic syndrome of survivors of the modern standard American diet. Not only do many people find they must heal their bodies from years of consuming toxic and rancid vegetable oils, a chemist’s vat of harmful additives, fake soy fabrications and just plain nutrient-deficient, fractionated foods, but their palates have become atrophied as well, and may need to be reacquainted with genuine flavors, aromas and textures.

She didn’t mince words, did she?

Further on in the article she gives some helpful advice for re-training our taste buds to appreciate nutrient-dense foods. Her first pitch? Start re-introducing hearty bone broths into your meals. A good homemade bone broth is inexpensive, surprisingly nutrient-dense, and appealing to just about anybody. It’s also really good for your digestion:

One very vital, but very often overlooked fixture in a nourishing traditional diet is the regular inclusion of soup made from bone stocks. I don’t know anyone who doesn’t love a soothing, delicious plate of soup, but it is peculiar how few families prepare soups regularly. In fact, genuine, generous soup plates are themselves rather hard to come by in the United States—most often smallish bowls are supposed to serve the purpose, along with tiny, almost useless spoons. In a country where cheap fast food is super-sized, and restaurant steaks are cut in one-and-a-half pound slabs, soup doesn’t even rate serious consideration. But right under our noses is not only a most appetizing aroma rising from a plate of beautiful soup, but the secret to our enjoyment of the rest of our meal and its easy digestion.

Traditional cultures around the world feature nutrient-dense bone broths at the start of meals. In our modern culture, this practice has carried over into the traditional “first course” of a fine meal: soup.

So, for the next little while, I’ll be walking you through the basics of bone broths and their many culinary uses. (Hint: it’s not just to make soup!)

In the meantime, if you or your loved ones are having a hard time transitioning your palate (or your tummies!) to love nutrient-dense foods, go check out the rest of Katherine’s tips.