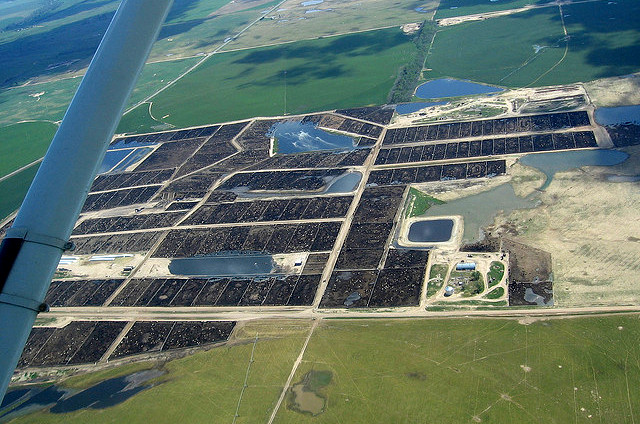 While he faces charges of criminal trespass, the Finney County attorney’s office has repeatedly clarified that the charges leveled against him have nothing to do with his photographs or the “ag gag” law Kansas has had on the books for nearly two decades. Rather, they say Steinmetz made the mistake of launching his paraglider from the feedlot’s private property and thus trespassed onto their land without permission.

In an age when the government has no qualms tapping your private cell phone calls and monitoring your internet usage without a warrant, this government support of a lack of transparency on the part of giant agribusinesses is both a little alarming and a tad hypocritical.

There are trade secrets and security issues. What are they taking the photos for? To damage us? Sue us? Why is someone there? If someone is coming onto posted property—the question is why? Most of the feedlot guys would cooperate with any photographer. They just want to be asked.
(source)

If Steinmetz had not trespassed, but merely flown over the feedlot and taken photos, would he have violated any laws?

Susan Schneider of the University of Arkansas School of Law said,

A landowner’s rights do extend to the airspace above his/her property. But the airways can be analogized to a public highway. If one is traveling through the air for a legitimate purpose in a reasonable manner at a height that would not unreasonably interfere with the landowner’s enjoyment of his/her property, in conformity with relevant flight regulations, then it would not be a trespass.
(source)

Yet even if he had gone through proper channels and taken off from a nearby property with permission, it’s still possible Steinmetz would be facing charges under Kansas’ ag gag laws.

Coined by the New York Times’ Mark Bittman, the phrase “ag gag” refers to laws that criminalize the First Amendment right of investigative reporters, activists, and agribusiness employees to uncover the truth behind industrial agriculture’s food production methods. The goal of these laws is to allow agribusinesses to “completely self-regulate,” a prospect which should scare any of us who are aware of the deplorable and inhumane conditions within industrial food production.

So, what’s the real issue here?

According to Susan Schneider,

The real issue is transparency. Farmers, feedlot operators and processors are all producing a product to sell to consumers. And that product is perhaps the most essential product on Earth — our food. Anytime the industry complains that people should not take a picture of how our food is being produced, it casts all of agriculture in a bad light.
(source)

How about you? Where do you stand on the issue of ag gag laws and food transparency?