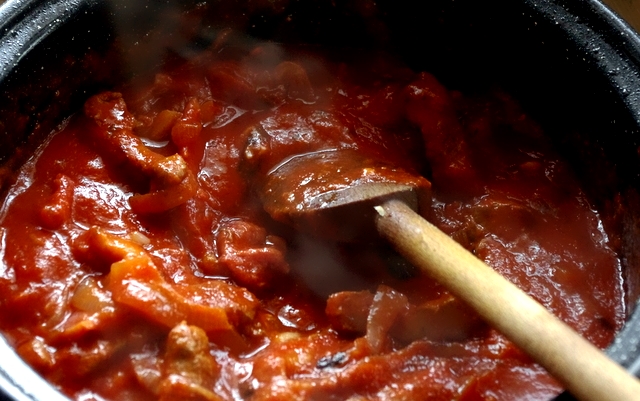 Almost two years ago we brought our longhorn, Cholula, into the butcher. I had a six week old baby in the sling and Texas had just weathered one of the worst droughts in history. Cholula was a bit on the thin side to say the least.

When we picked her up we had organ meats to eat for weeks. The amount of liver that comes from one cow is enormous, let me tell ya. Besides liver, there was tongue and kidney and heart and more and more liver. It was a lot of offal for one family, and while we eat it, we’re not jumping up and down about it.

But it seems like the right thing to do, the eating of the whole animal. Plus, we know the organs are incredibly nutrient-dense, even compared to that tasty flesh. So those weeks of organ meats really helped to strengthen me following the birth of our third baby.

Pairing liver with bacon and onions makes it delectable, as do these tips for cooking liver. Adding a layer of garlic-laden marinara sauce adds one more layer of flavor to balance out that strong liver flavor. It’s still liver, y’all, but if you’re going to eat it why not make it tasty?

For more delicious recipes similar to this one (low-carb, high-fat), I highly recommend the Wicked Good Ketogenic Diet Cookbook. 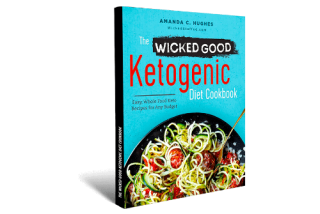 Learn all about how to eat to force your body to burn fat. This book is jam packed with 156 delicious fat-shredding recipes that will help you burn fat like crazy. Even stubborn belly and thigh fat won’t stand a chance because your body will have NO CHOICE but to burn that fat for fuel!

At the moment, the printed version of this cookbook is 100% free to Food Renegade readers. You just cover shipping & handling.

Shannon Stonger lives on a two acre off-grid homestead in Central Texas with her husband and four small children. Their family is attempting to create a simple, sustainable way of life from scratch. They like to call it agrarianism. Chickens, gardens, managing life in a small home, lots of food fermentation, homeschooling, and writing about it all make up the full and wonderful days of this life that she writes about at Nourishing Days.