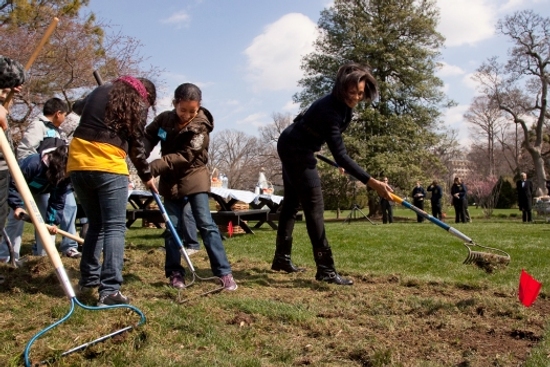 When Michelle Obama decided to plant an organic garden on the White House lawn back in March, Big Ag shot her a quick letter saying they were disappointed she didn’t “recognize the role conventional agriculture plays in the US.” Despite industry opposition, Mrs. Obama plowed ahead.

Now there’s a new 7 minute video telling the story of the White House garden. Of course, the word “organic” is mysteriously missing from the video, despite the garden being 100% organic. But, who cares? The video tells a noble tale: that of children being empowered to grow and eat their food, families choosing to eliminate processed foods and refined sugars from their diets in favor of fresh fruits and vegetables, and people choosing to sit down around their kitchen table at night rather than eating out.

The video features footage of the garden plans, bed preparation, soil amendments, planting, and harvesting. While watching it I thought, “Well of course they can add all those soil amendments, it’s The White House. That’d be too expensive for me.” So, I looked up the cost of the garden. According to the Yale Sustainable Food Project, the garden cost a mere $200 to install. That is fairly attainable.

Honestly, I think that was Michelle Obama’s goal. She wanted to inspire families to make small changes to their diets — little changes that can have a HUGE impact on health (such as passing up sugary sodas in favor of water). She wanted to make the changes seem easy, the modest goals attainable.

I often meet people who are overwhelmed when introduced to the concept of traditional, Real Food. Really, we Real Foodies are pushing something quite daunting to someone stuck on the convenience and cost of the Standard American Diet (SAD).

What? You want me to find and drink raw milk? You want me to shop for vegetables at a local farmer’s market? You want me to source and eat only pastured/grass-fed/wild meats? Organ meats? Give up yellow cooking oils? Properly prepare my grains or not eat them at all? GIVE UP SUGAR? (And we all know the list doesn’t just stop there.)

Sometimes inspiring people to make little changes is all we can do. Cook more meals from scratch. Dine in at home rather than out. Give up your daily soda in favor of something healthier. Inspire people to start thinking more conscientiously about their food choices.

That’s what Michelle Obama’s garden has started to do. As she says in the video, “if the President of the United States can make the time to sit down to a family meal with his kids every day, so can you.”

The idea is to enable people to make small, yet significant changes that help them start thinking differently about their food and health. Once they’re walking on that path, then you can worry about inspiring them to eat more locally and in season or make the switch to more traditional foods.

Watch the video. Pass it on. Get inspired to plant your own fall garden now if you haven’t done so already.