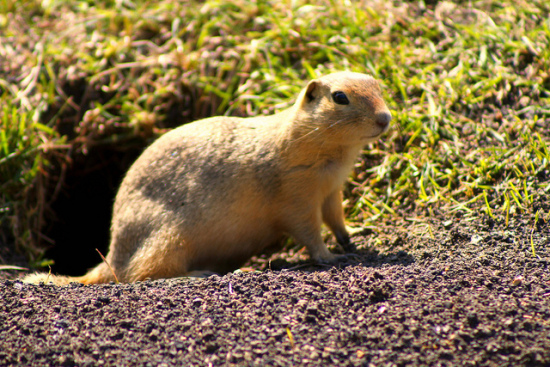 In most video games, gophers are the enemy. You play the farmer. Your goal? To keep those pesky pests from digging tunnels under your precious vegetables and stealing your crops. After all, you didn’t plant your garden to feed gophers. You planted it to feed yourself.

For these reasons, home gardeners are told to build raised beds for their vegetable gardens. And, of course, properly erected fences can keep out everything else — rabbits, deer, you name it.

So imagine this organic farmer’s surprise when he finally gave up on eradicating his gopher population.

It sounds like something out of a Looney Tunes episode. An exasperated farmer (we’ll call him Bob), slings his heavy shovel over one shoulder and tiptoes carefully into his blueberry patch. He kneels on the damp soil, squinting as he peers between the thick rows of flowering bushes. As he holds his breath, a furry creature pops its head above ground, sniffing in the cold spring air. Farmer Bob dashes forward. He digs, sweat dripping off his face. Dirt flies into the air making a spectacular arch.

And in the blink of an eye, the gopher is gone, popping up behind Farmer Bob this time. The gopher giggles in a chubby, furry, chortling sort of way. Repeat scene.

It just so happens that’s the real-life situation one farmer faced in California when he found his blueberry farm invaded by gophers. Try as he might to catch them–fearing that their hungry little teeth would devour his blueberry bushes–the gophers always seemed to evade his reach. Finally, accepting defeat, Farmer Bob gave the gophers the gold: free range of his blueberry crop.

And then an unexpected and quite amazing thing happened. The gophers didn’t destroy the farm or eat all his plants. In fact, these furry rodents are helping his blueberry bushes thrive.

You see, gophers dig tunnels that end up creating the ideal conditions for bumblebee nests. And bumblebees, unlike their overweight cousins, the honeybees, can squeeze perfectly between the long, narrow petals of blueberry bush flowers. See the connection yet? Gophers build the neighborhood for bumblebees. Enticed by an attractive Open House sign, the bumblebees move right in, constructing their nests in the abandoned gopher tunnels. And then, feeling quite settled and content, they fly around like crazy pollinating blueberry bushes.

What I want to know is this. Why don’t gophers like blueberries? Or would this happen in just about any farm?

Anyhow, the story made me smile. It’s just too ironic. Everything out there pegs gophers as pests. In this story, they’re the hero.

Organic farmers and gardeners seem to dwell in such irony. How about you? Do you have a story like this tucked away to share?