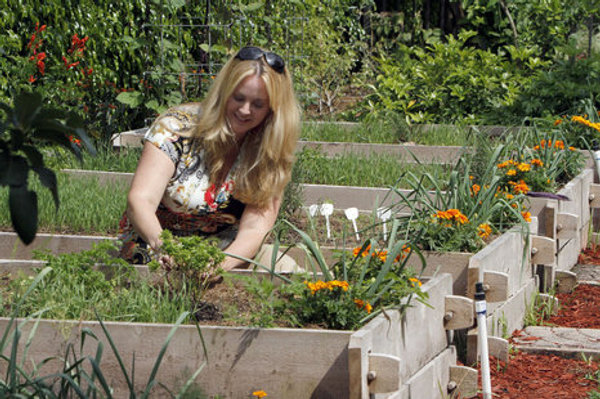 Imagine growing a lush, organic garden full of fruit trees and raised beds featuring edible flowers and vegetables. It’s beautiful. And it’s in your backyard. Your slice of heaven. Your respite. The place where you can get your hands dirty growing wholesome, nourishing foods for you and your family.

One day you stroll out to your mailbox to find a letter from your HOA telling you your garden is in violation of HOA rules. According to your deed restrictions, all fruit trees and edible plants should be grown inside a screened in patio. You face $100/day fines for each day that you refuse to tear up your fruit trees and remove your raised beds.

That’s just what happened to Amy Becerra of Florida. And she’s determined to fight.

From the Miami Herald’s coverage:

In preparing for her case, Becerra recently drove throughout her Weston Hills subdivision trying to tally the fruit trees she spotted growing throughout the community. Her final count came out to 103 homes, growing everything from avocados to lemons. She said she brought it to the attention of the HOA managers, not to rat out other residents but to highlight how the trees are fixtures through out the community. Becerra said was told by the management company that they could not comment on other households.

“Across the country there are so many laws and programs encouraging people to grow their own foods,” Becerra said as she examined a vine of tomatoes growing in her back yard. “I don’t understand why I should be discouraged from planting fruits and vegetables for my family to enjoy. ”

Former North Miami Beach Mayor and Commissioner Frank Wolland, an attorney by profession, volunteered to represent Becerra. Her case struck a chord with Wolland, who as a commissioner found himself the target of complaints for planting a vegetable garden in his front yard. Eventually he was made to remove the vegetable garden, which he replaced with rose bushes.

“The architectural control guidelines want all the houses to look the same,” Wolland said of the HOA guidelines. “Well, from the street you can’t tell that this house is any different from any of the other neighboring houses,” Wolland said. “It looks just as nice. You can’t tell there is a vegetable garden until you start climbing around to see what’s going on back there. That’s the point at which Big Brother has to stand back.”

After the publicity in the Miami Herald, Amy Becerra’s HOA has promised to “review the case.” Amy is not hopeful about the outcome. “They allow non-food producing plants, but if it turns into a food it’s not allowed? This is really awful. In these trying times I would expect a change of attitude. Look at Japan? We never know when life will change for the worse. I just want to have some healthy food for my family,” she said in an email to me earlier this week.

All this over a garden that’s in her backyard? Her backyard? I understand the important role that HOAs play in creating communities. They help prop up property values by maintaining community areas like parks, swimming pools, and tennis courts. They can even help maintain certain standards for how the community chooses to look. Are crazy paint colors allowed? Broken down cars stored in visible driveways? Old refrigerators? What if your neighbors don’t want to live five feet away from a smelly cow or braying horse? An HOA can put forth restrictions which shape what kind of neighborhood or community you live in.

But how does what Amy Becerra does in the privacy of her backyard affect her neighbors’ property values? Does it make her home unsightly? Is it noisy or smelly? Does it in any way, shape, size, or form make her a bad neighbor?

This strikes me as simply another example of authority overstepping its bounds, grabbing for a level of control that is not rightfully theirs. Thankfully, HOAs are as local a form of government as you can get. If I were Amy Becerra, I’d draft a letter to those 103 neighbors who also have visible fruit trees and get them to stand with me to re-write our community’s deed restrictions. I’d try to take over the HOA by — you guessed it! — participating. Go to the monthly meetings, vote according to my conscience, and get other like-minded neighbors to stand with me. When it comes to HOAs, it really is a numbers game.

In the Urban Homesteading movement, HOAs Wars are common. Usually, though, it has to do with people planting gardens in their FRONT yards or keeping chickens. While I’m all for both, I can at least understand the arguments some neighbors would pose against those behaviors. But where is the harm in Amy Becerra’s backyard garden?

Do you have your own HOA story? Are you still operating incognito, flying under the radar? Have you fought your HOA and won? Let’s learn from each other’s experiences. We need to collectively find the the right tool to fix this injustice, humans in liberty are allowed to grow food.

(photo of Amy Becerra by Walter Michot of the Miami Herald)