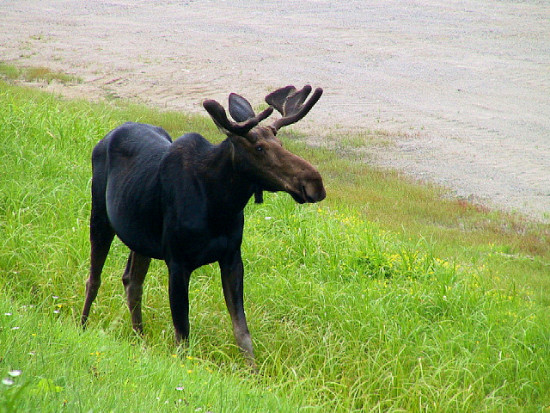 Last winter, someone driving by my friend’s house in Alaska hit a moose. The car was totaled. The moose, dead, but in good shape. My friend and her family petitioned the local law enforcement to allow them to butcher the moose and eat it. They spent the next couple of days working hard at home processing the meat. No need to hunt that year.

In his book, The Revolution Will Not Be Microwaved (my review here), Sandor Ellix Katz spends a whole section of the chapter on foraging discussing the merits of roadkill. According to him, there’s a whole movement of people dedicated to eating nothing but roadkill. It’s a shame, they say, to let all that edible food just go to waste.

I’m sure you’re familiar with the image of it “going to waste.” Most roadkill I’ve seen looks totally unappetizing — bloated flesh, flies, nasty smells. Even just remembering such sights can make me shudder.

But what if the roadkill is fresh, looks no more marred than a deer killed by a bullet, and is kept from decomposing by freezing outdoor temperatures? That’s what chef Daniel Klein cooked up in his Christmas episode of The Perennial Plate. The Perennial Plate is my favorite five to ten minutes of internet television each week. In each episode, you get to watch as Daniel farms, hunts, and cooks his way through a year in Minnesota. It’s all about sustainable, local, and organic foods. I’ve seen him harvest wild rice with Native Americans, kill his own Thanksgiving turkey, and cook up scrumptious meals of 100% local ingredients. It’s right up any Food Renegade’s alley.

So, before you make up your mind about roadkill, watch this 10 minute episode where Daniel fails to see any deer on his fifth full day of hunting and resorts to Plan B:

In American culture, eating roadkill generally has a pejorative classist connotation, epitomizing ignorant hillbilly behavior. Now Wildroots and other enthusiasts are embracing roadkill with a political ideology, rejecting the values of consumer culture by ‘transforming dishonored victims of the petroleum age into food which nourishes, and clothing which warms.’ Beyond ideology, they are spreading practical information and skills to empower people.

Indeed, the folks at Wildroots (and others like them) have made it their mission to teach people the primitive skills necessary to forage food well — including how to discern the edibility of roadkill.

So, what do you think? If you could eat fresh roadkill, would you?

For myself, I think I’d be adventurous enough to try it if someone else foraged it and prepared it. Translation: I’ve got no problem with the idea of eating roadkill. But, I’m not so sure I’m inspired enough to go find some roadkill, butcher it myself, and then turn it into meals.