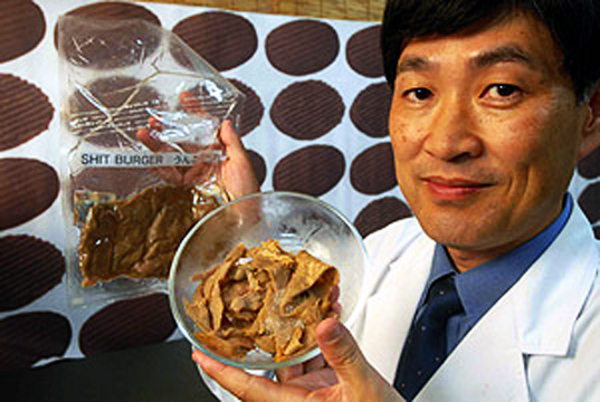 You can’t make this stuff up. Japanese scientists have taken proteins found in human feces and engineered edible, artificial steaks out of it. Of course, as with any fake meat, the steaks — which many claim tastes “just like beef” — are pumped full of artificial food dyes and dangerous soy proteins. Why would you possibly want to eat steaks created out of human excrement?

So, let me get this right. We’re supposed to eat meat made out of our own excrement, meat artificially manufactured in laboratories, rather than simply return to meat raised on pasture?

Excuse me Mr. Scientist, but meat raised on pasture is more environmentally responsible. Grazing animals help increase topsoil, and have demonstrably reversed desertification. Meat animals raised this way get to act according to their natures, and so there is no question of animal cruelty. Pasture-raised meat is also markedly healthier for you, rich in all the right kinds of fats, perfectly balanced to reduce your risk of cancer and heart disease.

If we are afraid of not having enough meat to “feed the world” or the amount of fossil fuels that go into creating your average 8oz. steak, then shouldn’t we first consider going back to natural, more humane ways of raising meat animals? We could eliminate hundreds of thousands of acres of wasted monoculture crop land, put grazing animals on it, and watch it revert back to prairie grasses. According to this Mother Earth News article, intensive grazing of meat animals will solve our topsoil crisis and help store carbon, reduce dependence on fossil fuel inputs, and reduce greenhouse gas emissions. It will dramatically reduce the use of antibiotics in animal production, effectively eliminating the crisis of growing super bugs. And, it will produce healthier meat on a scale that could actually feed the world.

Oh well. Apparently all that’s far too difficult, even though everyone knows the system we currently have is unsustainable. So, instead of using technology to improve the production levels available on intensively grazed pasture, we’re going to use technology to create fake meat out of our own poop.

These scientists are actually proud of themselves. Watch!

ETA: In light of many comments wondering if this news story is a hoax, I’ve written the following response. “Actually, the story has been featured prominently on many major news outlets, including Fox News, Yahoo News, LA Weekly, and The New York Daily News. So, if it’s a total hoax, then these news agencies have a lot to answer for. There is a reporter at Salon.com who is currently attempting to verify the story by contacting the scientist interviewed in the video, who he found working at Okayama UNESCO. That same reporter found various news stories from 1993 that sound similar to this one, but has found no evidence that the story was then (or is now) a hoax. I think the most likely scenario is that this was a legitimate news story back in the 90s, but that these major news outlets have picked it up and recirculated it because the video from this old British TV show recently went viral on YouTube. Guess we’ll wait and see!”