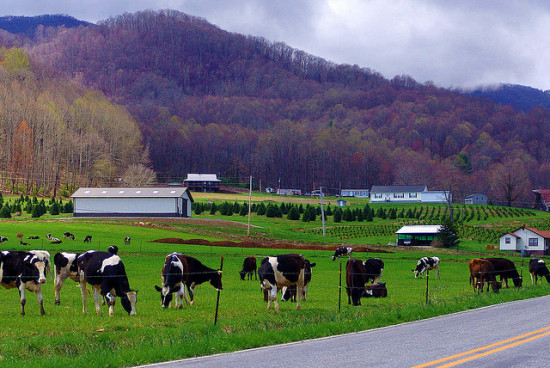 Imagine this. You’re a farmer. You home school your many children and keep to a peaceful country life. You specialize in making the highest quality raw milk cheese from grass-fed cows. Every morning you walk out into a gray morning and watch the sunrise over the swaying fields of lush, green grasses while you go about your daily farm chores. You don’t own a gun. You’ve never even fired one. You are a law-abiding person, and you’ve never so much as gotten a parking ticket.

Then, one day, federal agents show up at your door, guns drawn. They storm into your farm house like a SWAT team, armed with high-powered guns and sporting bullet proof vests. They scare you, your kids, and seize your property while flashing badges, waving warrants, and shouting orders. You never knew you were so dangerous. After all, you’re Amish.

Good thing this is an imaginary story. And yet it isn’t. Watch this:

Often times these raids are conducted in ways that over-step the boundaries outlined in the warrants. Seized goods (which represent the farm’s entire income for the year) are improperly transported, stored, tested, and destroyed. The government policy seems to be “Destroy now. Ask questions later.”

Of course, that policy has caused farm after farm to go under. Then, years later, when the farmers are cleared of any charges brought against them, it’s too late. They’ve lost their home. They’ve lost their farm. Their entire lives have been turned upside down. And of course the government offers no real restitution.

As these raids become more frequent (2 prominent ones in the last month!), it has become clear that those of us who value local, organic, unprocessed foods and the farmers who supply them have to change tactics. We have got to stand behind these farmers so that they don’t go under.

Spend The Next 10 Minutes Saving A Family Farm

The two farms raided last month will suffer the loss of their entire inventory of cheese for the year, despite the fact that NO ONE has gotten sick from their cheeses and NO TESTING AT THE FARM has come back positive for any food borne pathogens. (There have been some positive tests for certain bacteria in the cheeses, but the circumstances surrounding the testing is shady at best. The cheese was improperly transported, stored, and handled from the time samples were seized during the raids until the time they were tested.) Furthermore:

What is unjust about the actions taken against Morningland and Estrella is that there has not been an adequate level of proof shown to establish that the bacteria found in the cheese and the environment are actually harmful to human health. There are many subtypes of L. mono (and Staph. aureus); as mentioned above, many of these subtypes have not been found to cause illness in humans. The agencies have the capability to determine the subtype of a pathogen found and whether that particular subtype is on record as having caused human illness; if the subtype has not, then there is no adulteration and no need to destroy the product.

Neither the FDA nor Milk Board, which is working at the direction of FDA, has conducted any testing to determine the subtype. Once the agencies had the initial positive tests, they should have done subsequent testing for the subtype. Even if the subtype is known to cause illness in humans, it still needs to be determined whether the amount of bacteria in the food is enough to actually do so. FDA has a zero tolerance policy for L. mono, a standard widely rejected by the scientific community throughout the world. The zero tolerance policy, in fact, reduces the incentive to test for L. mono.

What stands to happen now is that the dairies could be forced to destroy hundreds of thousands of dollars in product that are no threat to the public health. Morningland and Estrella have suffered significant financial losses as it already is; neither has produced any cheese in the last two months. The destruction orders from the courts would further cripple their businesses, if not entirely shutting them down.

DONATE TO SAVE MORNINGLAND DAIRY

DONATE TO SAVE ESTRELLA FAMILY CREAMERY

I know times are tough financially, but PLEASE search your heart and see what you can honestly afford to give. Then give it. Even if it’s just $5. If all my readers gave at least $5, BOTH these dairies would be able to be financially solvent this year, despite their heavy losses.

2. Sign Up For Our NEW Farm Raid Fund Email Updates

Just enter your name and email address below to sign up for our email list. (You can also sign up here.) We will send an email out every time a farm gets raided so you can pledge $5 (or more) to save the farm from going under.

(Please note: we will ONLY use this email alert when a farm needs help due to a raid. We will not share or sell your email addresses — ever! You can opt out at any time.)