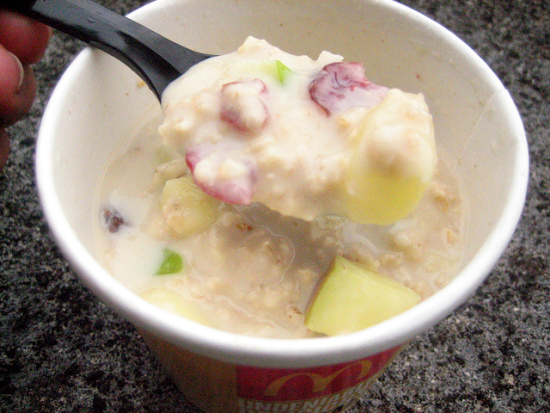 I’ve often lamented about how impossible it is to find Real Food when out of the house. I usually “compromise” and make the best choice available. Maybe you do, too. Maybe, just maybe, you might have found yourself looking at the new McDonald’s menu option of Oatmeal and thinking, “Well, the oats probably weren’t soaked overnight, but how badly can they mess this up?”

You’d be surprised! (Or, maybe you wouldn’t be. I mean, do any of us REALLY expect McDonald’s to get something as simple as oatmeal right?)

If you were making “Fruit and Maple Oatmeal,” how many ingredients would you include? Five? For me, it’d be rolled oats, yogurt (to soak the oats in overnight), butter, maple syrup, and diced fruit. I could maybe imagine a touch of salt or a bit of cream, too. So, what’s that? Seven?

From a recent Mark Bittman rant:

Since we know there are barely any rules governing promotion of foods, one might wonder how this compares to real oatmeal, besides being 10 times as expensive. Some will say that it tastes better, but that’s because they’re addicted to sickly sweet foods, which is what this bowlful of wholesome is.

Others will argue that the McDonald’s version is more “convenient.” This is nonsense; in the time it takes to go into a McDonald’s, stand in line, order, wait, pay and leave, you could make oatmeal for four while taking your vitamins, brushing your teeth and half-unloading the dishwasher. (If you’re too busy to eat it before you leave the house, you could throw it in a container and microwave it at work. If you prefer so-called instant, flavored oatmeal, see this link, which will describe how to make your own).

More sugar than a Snicker’s bar!

I could really care less how many calories it is, mostly because calories figure so rarely into any of my food choices. But I do care about tons of added sugar. Oh, and the 11 weird ingredients I would never keep in my kitchen.

Really, McDonald’s, is it that hard to do oatmeal right?