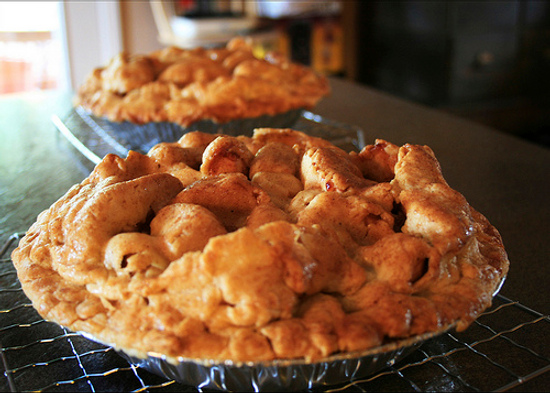 Oh wait! You don’t have to imagine it. That’s the world we live in.

Earlier this week, the Wall Street Journal ran a story on the now famous Pennsylvania Pie Fight, dubbed “piegate” by some.

The crux of the story? Selling baked goods made in someone’s home kitchen is illegal — unless that person’s home happens to contain a certified commercial kitchen.

To be fair, the state will “allow” you to sell homemade baked goods if you pay $35 to have your kitchen inspected (and it passes).

“Well, that’s just ridiculous,” says Ms. Humbert, 73, one of the parish bakers. She has been bringing raisin pies to the church for more than a decade and says she thought the women’s kitchens “are probably a lot cleaner than some restaurants,” but might not meet “nitpicky” requirements. (source)

2.  Why do little old grandmas, or neighbors, or even you, need “permission” from the government to sell home baked goods anyway?

What business is it of the government’s what you do in your kitchen? If your neighbors or your church members want to pay you to make them pies, or bake a loaf of bread, or cook them dinner while they’re busy or sick, why shouldn’t they be “allowed” to reimburse you for your time & expenses?

Some object that we need certified and inspected kitchens in order to keep food “safe.” Since when is it the government’s job to make sure your kitchen is “safe”? Isn’t that your job? And if your neighbors get sick from the food you prepare, they have the right to sue you for damages if you didn’t resolve the issue to their personal satisfaction.

This is another example of the long arm of the law reaching too far, of laws written with giant businesses in mind not scaling down to the level of small-scale producers.

And what’s the end result of this kind of legislation?

We are becomingly increasingly disconnected from the food on our tables. We’ve forgotten how to cook, and some might argue we’ve forgotten how to eat.  We’ve put the responsibility for feeding our children, our families, our communities, and ourselves in the hands of giant corporations who have no concern for our health and safety.

It’s time for us to take control of what we eat, fight back against the dominate food culture, and join the real food revolution — even if it means buying illegal pies from little old grandmas.