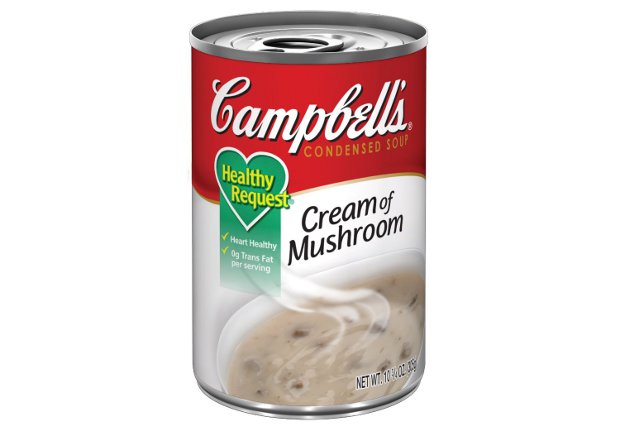 Perhaps my biggest pet peeve is seeing food marketed as “healthy” or “natural” that is anything BUT those things. How can they label bubble-gum flavored apples “100% Natural”?

Of course, I know how. “Natural” is a regulated term that just means derived from nature rather than totally synthesized. But it does not, in any way, mean that the food is presented as it is in nature, or in a way we’ve traditionally prepared it. Hence, we can have “natural” orange juice that has been vat stored for up to a year and had “natural” flavorings added back into it since it would otherwise be flavorless.

“Healthy” is just as ambiguous a term in food marketing. But we buy into it. Over and over.

Case in point? Campbell’s Healthy Request Cream of Mushroom Soup. It says it’s healthy right there on the label. But is it really?

Here’s what the manufacturer claims:

This soup is part of our Wellness Collection.

It’s got the name “Healthy” right on the label! It’s “more nutritious”! It’s made with “natural sea salt,” has “no added MSG,” and “0 grams of trans fat”! These are all good things…. I think.

Water and mushrooms need little explanation. We could get picky and ask if it’s clean water and organic mushrooms, but let’s not. Okay?

Modified food starch is a heavily-processed ingredient used as a thickening agent, stabilizer, and emulsifier. It can be made from any number of starchy foods, including corn, wheat, or tapioca. The consensus seems to be that it’s relatively harmless. However, if you’re gluten-sensitive, you’ll want to avoid it unless it’s explicitly labeled “gluten-free.” Also, if it’s made from corn, there’s a 88% chance it’s genetically-modified corn with built-in pesticides and other “goodies.” It’s also likely that modified food starch hides MSG, although this may not always be true for all cases.

Wheat flour is a refined flour with added synthetic vitamins and minerals. While this may not be best for you, it’s also not especially concerning. Many foods are made with refined flours, and this is in low enough quantities that I suspect it’s only here to be a thickener.

Vegetable oil is definitely one of those totally gross products of the industrialization of our food supply that I wish our culture would entirely abandon. Corn, cottonseed, canola, and soybean oil are all highly likely to be from genetically-modified plants. But the real kicker here is that these industrially-produced oils are completely unnatural and new to the human diet:

You see, prior to the industrial revolution, making seed-based cooking oils was far too labor intensive and (in many cases) downright impossible. All the ancient cooking oils (like coconut oil, palm oil, olive oil, etc.) are easily pressed out of the plant without needing extremely high-pressure or high-temperature extraction.

After the industrial revolution, we had the technology necessary to create modern seed-based cooking oils. So, we did.

But the process of making and refining these oils translates into one thing: rancid polyunsaturated fatty acids (PUFAs). PUFAs don’t hold up well to heat or pressure. The same is true for both organic canola and organic soy oil. Soybean oil is roughly 58% polyunsaturated fatty acids — nearly twice that of canola! So, in the process of being extracted from the seed, these oils oxidize and many of them plasticize (turn into trans fats). The end result is stinky and unappetizing, so the oil is further “cleaned” using bleach or alternative chemicals to deodorize it.

Let’s be clear on the recent history of soy. The soybean was a modest and unpopular crop until food manufacturers intent on creating cheap vegetable oils convinced the U.S. government to start subsidizing it. The soy was turned into oil, and the industry was left with an industrial waste product. Then somebody had a brilliant idea:

Let’s take this industrial waste product full of toxins and carcinogens — isolated soy protein — and turn it into food that people will eat!

In fact, isolated soy proteins do not even carry the “Generally Recognized as Safe” (GRAS) status which seems to be so freely handed out by the FDA.

The FDA refused to approve isolated soy protein as a safe food additive with the designation “Generally Recognized as Safe.”

Agribusiness giant Archer Daniels Midland withdrew its application for the coveted GRAS status for soy protein, after an outcry from scientists about the toxins and carcinogens that come with it. They can still put soy protein in your food, but they have to get pre-market approval for every product.

So, whenever you read “soy protein,” think: industrial waste product full of toxins and carcinogens. Then, don’t eat it!

Cream (milk) is surprisingly low on this ingredient list, considering that in any homemade cream of mushroom soup it would be the number two ingredient, right behind homemade broth. That alone is a warning sign that this food is more fake than real.

Salt is here to add flavor, as are potassium chloride, flavoring, and low-sodium natural sea salt. Potassium chloride is often used in food processing as a sodium-free salt. Since this is the “healthy” version of this Campbell’s soup, it makes sense they’re trying to reduce the sodium levels of the food.

Flavoring is one of those warning-flag ingredients because it often hides MSG. (Read more about why MSG is dangerous.) In this case, I’m entirely certain it does.

Want to know how? It’s those other two ingredients — the disodium inosinate and disodium guanylate. These food additives are completely ineffective and useless without MSG! These are flavor enhancers that work in conjunction with MSG. There’s absolutely no reason for them to be there unless MSG is also there.

Unfortunately, it’s perfectly legal for a company to say their food product has “No added MSG” so long as they don’t add an ingredient called “monosodium glutamate” to their food. MSG, however, hides in more than 40 commonly used ingredients in industrial food — ingredients like flavoring. This means MSG can sneak up on you in a whole host of foods that don’t technically have a single ingredient called monosodium glutamate listed on their label. (source)

For more on where MSG may be hiding in your food labels, I’ve created a handy, downloadable, easy-to-print guide for you.

Calcium carbonate is used in a host of industrial applications. In food, it can be used as a calcium supplement, and is approved for use as an a acidity regulator, anticaking agent, stabilizer or color.

Last, but not least, we have dehydrated mushrooms. I don’t think I’ve got anything to say about these! (SHOCKING, I know.)

So, what should you use instead?

Of course, the best option is to make your own cream of mushroom soup. I’ve been making this delicious recipe from Chef John for years.

Here’s a video which demonstrates just how straightforward his recipe is. (You’ll still need to go to the recipe for the complete ingredient list, though.)

In this series on Decoding Labels, I’m highlighting deceptive labeling practices, hidden ingredients, and more! If you’ve got a particular label pet-peeve you’d like me to share, please feel free to email me with your idea. It may just turn into a blog post!

« Fight Back Friday December 21st
The Best of 2012: Food Renegade’s Year in Review »