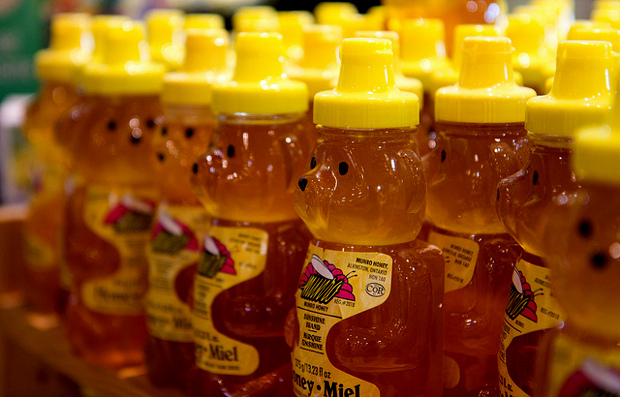 After my post revealing the shocking truth about olive oil adulteration, I received a number of outraged comments along the lines of this one: “Is nothing sacred? First honey, and now this?!!!”

My interest was piqued. Honey? Since when was my honey fake?

Oh, I’d known about the fake “honey” they serve in single-serving packets at restaurants and cafeterias. That’s because I read the ingredients label. Almost all of them fessed up to being what they are — honey-flavored corn syrup. But I didn’t know that the vast majority of the major labels of honey sold in the U.S. aren’t real honey. Thankfully, I always buy mine from one of two local farms. My favorite is from a little old lady who keeps bees just a few miles from me. The other is from a farm in the town next door. According to my recent research, that means I’m safe. But those rows and rows of non-local honey from major distributors found in the supermarket? Those aren’t safe. In fact, they’re almost guaranteed to be fake.

According to the FDA (as well as the food safety divisions of the World Health Organization and the European Commission), the one test that authenticates honey is the presence of pollen. If the liquid gold doesn’t contain pollen, it isn’t honey.

This prompted Food Safety News to test more than 60 different samples of store bought honey for pollen. The results were damning:

When buying from drug stores like Walgreens, Rite Aid, and CVS, the failure rate went as high as 100%!

The good news is that every sample bought from farmers’ markets, co-ops, and natural food stores was loaded with pollen. So, as with olive oil, the real stuff is out there. You just have to make sure it was sourced from a single farm or small co-op of farms.

Why is all the pollen missing?

Good question! When asked why the pollen is removed, Mark Jensen, president of the American Honey Producers Association said this:

“I don’t know of any U.S. producer that would want to do that. Elimination of all pollen can only be achieved by ultra-filtering and this filtration process does nothing but cost money and diminish the quality of the honey,” Jensen said.

“In my judgment, it is pretty safe to assume that any ultra-filtered honey on store shelves is Chinese honey and it’s even safer to assume that it entered the country uninspected and in violation of federal law,” he added.

This idea is confirmed by Richard Adee, a U.S. honey producer who keeps 80,000 hives. He said:

“There is only one reason to ultra-filter honey and there’s nothing good about it. It’s no secret to anyone in the business that the only reason all the pollen is filtered out is to hide where it initially came from and the fact is that in almost all cases, that is China.”

In the normal honey-making process, honey is filtered to remove bee parts, waxes, and other debris. This routine filtration is no cause for alarm. Almost all the pollen remains intact in the honey, and it helps make a slightly more shelf-stable product.

But when you purposefully use ultra-filtration — a high-temperature, high-pressure extraction process — you remove all the pollen. Without the pollen, the origin of the honey is untraceable.

Why are these companies bothering to hide the honey’s origin?

Because it’s likely to have come from China, and Chinese honey is cheap, diluted with high-fructose corn syrup and sweeteners, and tainted with crazy chemicals and antibiotics.

In 2001, Chinese beekeepers experienced an epidemic of the foulbrood disease that ransacked their hives. They fought off the disease with strong animal antibiotics, including chloramphenicol — a carcinogenic antibiotic that’s been banned by the FDA. Recently, the FDA even confiscated $32,000 worth of imported Chinese honey that was contaminated with this drug.

And, get this! The FDA only tests about 5% of imported honey. So who knows how much more of this tainted honey is being smuggled into the U.S.?

The Chinese have many state-of-the-art processing plants but their beekeepers don’t have the sophistication to match. There are tens of thousands of tiny operators spread from the Yangtze River and coastal Guangdong and Changbai to deep inland Qinghai province. The lead contamination in some honey has been attributed to these mom-and-pop vendors who use small, unlined, lead-soldered drums to collect and store the honey before it is collected by the brokers for processing.
(source)

After enough scandals involving cheap adulterated Chinese honey flooding the American market, the FTC imposed stiff tariffs on Chinese honey in 2001 to try to stop it from being imported.

Of course, that just means that now the Chinese honey is laundered through other Asian and some European countries before being imported to the U.S. Despite the extra cost mark up from these middle-men countries, laundered Chinese “honey” is still cheaper than U.S. honey. So, it’s still getting bought and distributed. And, to hide this alarming fact, honey suppliers are ultra-filtering their so-called honey to hide its origins.

As recently as last year, U.S. District Attorneys arrested a number of individuals who had ties to a global honey laundering conspiracy involving the largest honey importer in the country.

After the U.S. tariffs were levied, ALW, the largest honey importer in the U.S., began networking with Chinese honey producers and brokers desperate to unload cheap products.

In exchange for contracts with ALW, honey brokers agreed to move Chinese-origin honey to Russia, India, Indonesia, Malaysia, Mongolia, the Philippines, South Korea, Taiwan and Thailand, according to court documents.

The brokers also agreed to repackage the honey and muddy its trail by using a series of shell companies to ship it to the U.S. That meant falsifying country of origin certificates and, in some cases, deliberately mislabeling honey as molasses, fructose or glucose syrup so customs officials would not notice a suspect increase in honey shipments. Brokers were told to hire specific labs that specialized in filtering the honey to remove markers (such as pollen or soil) that could be used to trace shipments back to their true origin, according to court documents that outline the U.S. government’s case.
(source)

But beekeeper Richard Adee wasn’t hopeful about the arrests, or the uncovered conspiracy. He said, “It’s kind of like they’re running a car-stealing ring. You catch the guy stealing the car and put him out of business. But the guy that’s laundering, the chop shop or the packer, he just finds another supplier.” (source)

Where can you find REAL honey?

Your first priority should be to stick with buying local honey from a single farm or small co-op. This is always guaranteed to be real.

If you don’t know of any local suppliers or have a hard time finding them, chances are fair to medium-good that if you stick to organic store-bought honey, it will be real. The Food Safety News study revealed that five out of seven “organic” honeys contained pollen, meaning only 28% failed.

Yet, if you’re like me, that 28% failure rate is still unconscionable.

In that case, I highly recommend you check out this online supplier of honey, who I personally vouch for. (I know the family behind this company, and they’re good people!)

(where to find REAL honey)

« Old-Fashioned Refried Beans
Your Gut: Understanding The Keys To Health »