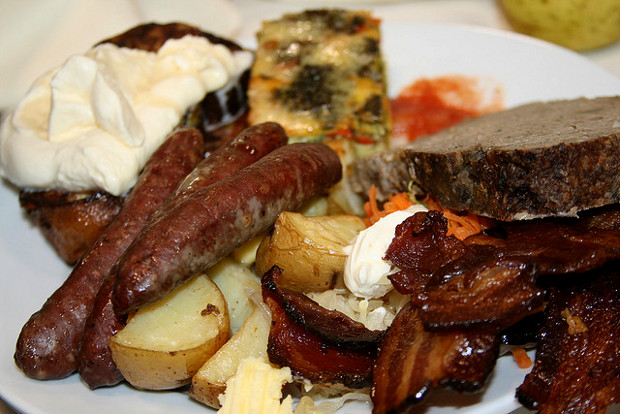 What do the Paleo Diet, the Primal Diet, and the WAPF Diet have in common? A love of ancestral health. In their own ways, each of these diets is committed to eliminating processed, industrial foods in favor of the traditional diets that humans have been eating for thousands of generations.

I spent this past weekend at the Weston A Price Foundation 12th Annual Wise Traditions Conference where I was honored to speak in a small capacity as part of a Real Food Bloggers Panel. I also got to catch up with old friends, make new friends, and rub shoulders with people from all parts of this growing community. I ran into many different kinds of eaters, too. Paleo eaters. Primal eaters. WAPF eaters. GAPS eaters.

You know what? We all got along just fine. In fact, we were downright friendly. We had far more in common than you’d think — particularly if you’ve been reading some of the more divisive blog posts and Facebook conversations of late.

First, let me offer up a few clarifications:

Among all these groups, you’ll find various subsets of adherents dedicated to healing various digestive and metabolic maladies. They may prescribe slightly more stringent dietary rules, such as fewer carbs, more “safe starches,” complete elimination of grains, or healing protocols of probiotics.

When I look at these groups, I have a hard time seeing all these so-called differences. That’s because each label is a “Big Tent” — a sort of umbrella term that accepts various iterations of the “perfect diet” based on individual biochemistry.

For example, there’s no reason why a self-proclaimed Paleo dieter couldn’t add more nutrient-dense seafood, organ meats, broths, tropical oils, and fermented veggies to their diet. If they did, they’d suddenly fall well within the norm for a WAPF dieter. Would that person then refer to themselves as a WAPF dieter? A Paleo dieter?

My point? We’re all ancestral eaters, all completely dedicated to eating Real Food. So, why the infighting? The needling? Are we just that competitive?

This is the main reason why I started the Fight Back Friday blog carnival a couple of years ago. I love that each Friday we get a collection of recipes, news stories, and anecdotes from all around the blogosphere. I love that there are Primal dieters, Paleo dieters, and GAPS-dieting WAPFers all posting in the same space.

I don’t expect us all to sing kumbaya around a campfire anytime soon, but I sure did enjoy picking apart conference lectures at the lunch or dinner table this past weekend as we all chowed down on the Exact. Same. Meal. together.

We have more in common than we think.