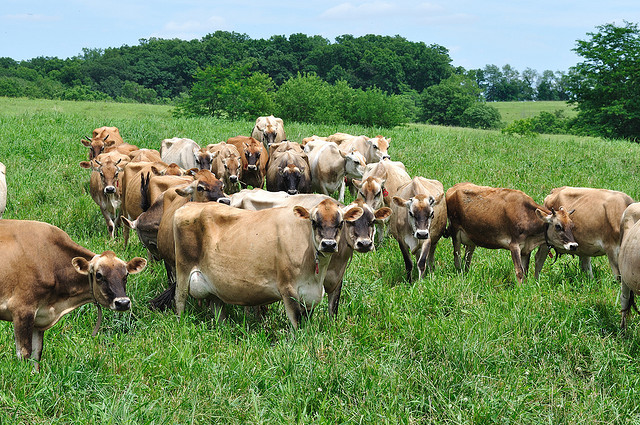 Texas is one of the many states where sales of raw milk are legal. However, unlike some states, Texas does not permit raw milk to be sold off the farm where it’s produced.

In other words, you can not buy raw milk at a farmer’s market or in a retail store. I am lucky enough to live a few miles down the road from a raw milk dairy, so I can drive up to the farm store and pick up milk once a week without any hassle. Unfortunately, many other Texas raw milk drinkers aren’t so lucky.

Some consumers who live quite far from the farms that produce their milk have taken to arranging a sort of driving/delivery system where a group representative buys the milk at the farm and delivers it to drop points in various locations where participants reimburse the driver. Or buyers place orders “at the farm” over the phone or online, but the farm delivers the milk to them. Arguably, these practices are illegal, a mere play on words to mask a violation of the spirit of the law while still adhering to its letter.

Last week, the state of Texas actually cracked down on one such dairy farm, forcing it to dump 700 gallons of perfectly good milk and temporarily suspending the dairy’s raw milk license.

Miller Dairy Farm, located just south west of San Antonio, delivered milk to the city’s residents in a refrigerated van at pre-determined drop points. Customers technically placed and paid for orders at the farm (online), and the farm then drove to neighborhood drop points for delivery.

Unfortunately, a neighbor near one of the drop points complained about the resulting traffic as swarms of raw milk mommas parked their minivans up and down the crowded neighborhood street, so the Texas Department of State Health Services got wind of the illegal practice.

They suspended Miller’s raw milk dairy license, forcing him to dump $5000 worth of milk down the drain. This is the video Miller posted to his Facebook page.

Watching perfectly good, nutrient-dense food get wasted riles me up. It turns out, I’m not alone.

Consumers all across the state are wondering what they can do to prevent this from happening in the future.

Thankfully, there is something you can do.

A bill before the Texas legislature would legalize off-farm sales of raw milk. HB 46, authored by Representative Flynn, would make it legal to sell licensed raw milk at farmer’s markets, drop points, and through delivery.

A similar bill did not pass in the last Texas legislative session, largely due to the lobbying of the Harris County Public Health Department, the Texas Medical Association, and the state’s dairy industry.

They argued against the bill, calling it a threat to food safety and public health. Yet Texas has one of the lowest incidence rates in the nation for raw milk illnesses.

“Texas raw milk farmers have an excellent safety record. CDC data from 1998-2010 show that there were only two reported illnesses attributed to raw milk in Texas during that time.”
(source)

This prompted Carolyn of Real Food Houston to opine that this is a food freedom issue, not a safety issue. She argues,

Milk delivered is not any less safe that milk picked up at the farm. In fact, the farmer would probably store and transport the milk in better condition than many consumers would. If the milk is delivered conveniently to the customer, there would be no hours-long drive to the farm to pick up milk. Both farmer and customer would benefit greatly from the passing of this bill.
(source)

If you’re a Texas resident — even if you do not yourself drink or purchase raw milk — FARFA is urging you to begin by calling your state representatives to express your support of HB 46:

If you don’t know who your Representative is, you can visit www.fyi.legis.state.tx.us or call the Capitol Switchboard at 512-463-4630. The Switchboard can connect you directly to your legislators’ offices if you wish, so it’s very quick!

Sample message:
“Hi, my name is _____ and I am a constituent. I am calling to urge Representative _____ to co-author HB 46, to legalize the sale of raw milk at farmers markets and other direct-to-consumer options. Do you know where he/she stands on the bill?”

If the staffer says they don’t know the Representative’s position (which is a common response), say: “I would very much appreciate it if you could call me back after talking with the Representative. This issue is very important to me and my family.”

You can also offer to send them materials about the bills via email. You can download our raw milk fact sheet at www.farmandranchfreedom.org/texas-hb-46-fact-sheet or email [email protected], and we can follow up.
(source)

For more information on HB 46 and ways you can demonstrate your support, visit the Farm and Ranch Freedom Association’s website.