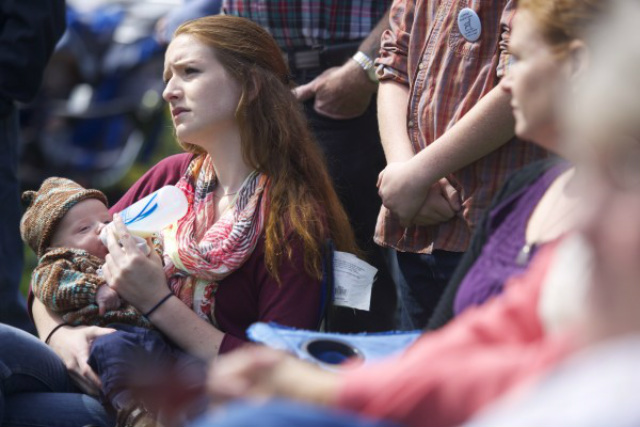 Nothing strikes more fear into the heart of a loving parent than the idea of having their children taken away.

Yet that’s just what the state of Maine threatened to do recently to young mother Alorah Gellerson when she told her doctor that she was feeding her baby a homemade formula made from raw goat’s milk.

Alorah began feeding her infant son, Carson, a homemade goat’s milk formula because he was not taking to breast feeding. Despite an improvement in Carson’s health, Alorah’s doctor reported her to DHHS, who quickly pounced on the family, claiming that the goat’s milk was somehow endangering the baby’s health. Citing United States Department of Agriculture (USDA) guidelines, DHHS threatened to take baby Carson away from Alorah if they did not comply with multiple examinations and a mandatory overnight hospital stay to force her son onto store-bought formula.
(source)

The Maine DHHS cited the USDA’s recommendations for what to feed babies as the driving force behind their investigation of Alorah.

Apparently, DHHS originally missed the fact that the formula Alorha Gellerson was carefully making for her infant son Carson was not simply raw goat’s milk — but a nutrient-rich recipe specifically created by the Weston A Price Foundation from wholesome ingredients for mothers who wish to opt out of toxin-laden commercial infant formulas.

Gellerson said she was so scared that she was going to lose Carson, she started to feed him store bought formulas. After three different types that all made her son throw up or have constipation, she switched back to the goat milk-based formula.

She said her son’s health is testament enough that she made the right decision.
(source)

Thankfully, Alorah did not go quietly into that dark night. Her story gained national attention, causing many to come to her defense.

As the days turned into weeks of harassment from DHHS, Alorah’s defenders grew more outspoken.

One area doctor went on TV offering his support:

“I don’t know what’s really driving it other than perhaps some different cultural belief system. I’ve got plenty of kids in my practice that have been given goat’s milk for example and they’re growing and developing fine,” said Jack Forbush, DO, The Osteopathic Center for Family Medicine in Hampden.
(source)

Local supporters even staged a protest on the same day Alorah was to have an appointment at the Spurwink Child Abuse Clinic office in Bangor (an appointment which was ultimately cancelled, but the protest continued anyway). Blaine Richardson, retired Navy captain and Republican Congressional Candidate spoke at the event, saying:

“These agencies are alleged to be protecting and serving the public at our direction, but instead they are playing food police for big farming and putting an enormous hardship on Maine families. We aren’t funding these agencies with our tax dollars so that they can kidnap children and breakup families.”

“In this gross abuse of government power, Maine DHHS cited the federal government’s recommendations from the USDA about what to feed babies. The USDA has zero constitutional authority to be dictating to us what we feed our children. The right to choose what we eat is one of our most basic human rights.”
(source)

Without issuing any kind of public statement, DHHS simply sent Alorah a letter stating that their investigation had found no neglect and was being closed.

While I am ultimately pleased with this result, I am dismayed that it even came to this.

Alorah’s son Carson began thriving as soon as he was placed on this homemade formula.

Why would a doctor choose to report a parent to DHHS when there are no signs of neglect at all and the child is gaining weight and developing normally?

Why would the DHHS not immediately dismiss the allegations of neglect when they saw the homemade formula and received documentation of its nutrient content?

Why would the DHHS dismiss the opinions of 4 professional doctors at Eastern Maine Medical Center when they cleared baby Carson for release, deeming him healthy & fit, and instead overrule their professional assessment and mandate an expensive overnight hospital stay?

Why would the state even have a say in what Alorah was feeding her son, particularly when that son shows no signs of neglect or poor health? Isn’t that a gross violation of parental rights?

Alorah thought so. In her final statement on her ordeal, she said, “Food, education and medical choices are a parent’s alone to make. Let us not become people who sit back and allow government to make choices for our families.” (source)