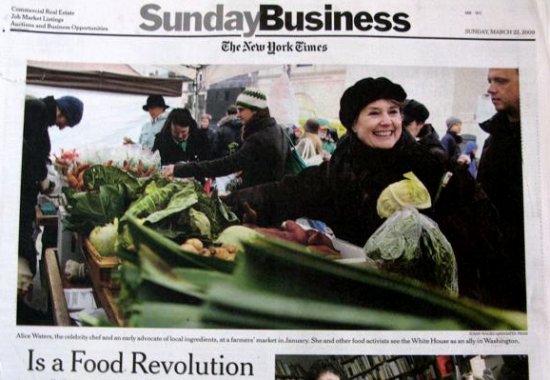 After last week’s 60 Minutes feature on Alice Waters and the Slow Food movement, I danced a little jig. Sure I was a bit annoyed at some aspects of the coverage, but it was coverage.

Guess who appeared on the cover the The New York Times Sunday Business section yesterday?

And this time, I actually really liked the reporting going on. Andrew Martin quoted several of the movers and shakers in the Real Food Revolution. The gist of the article is this: Real Food is going mainstream. Whether it’s the throngs of Washington congressmen now carrying around copies of The Omnivore’s Dilemma (a Food Renegade Must Read), or last week’s announcement by Michelle Obama that she’s planting a victory garden on the White House lawn (the first in more than 60 years!), Washington is abuzz with the idea of creating a more sustainable, diversified, regional food system.

While that sounds fantastic, I’m not sure there will actually be much legislative progress in that direction in the near future. The most influential bill on the American food system (The Farm Bill) just passed last year, and it’s generally only revisited once every 5 years.

And while I admire that discussions about Real Food are getting more and more trendy, I also know that the vast majority of Americans fall for this argument from the National Corn Growers Association hook, line, and sinker:

“We think there’s a place for organic, but don’t think we can feed ourselves and the world with organic. It’s not as productive, more labor-intensive and tends to be more expensive.”

That’s just not true. A recent, wide scale survey of food production levels in both developed and developing countries found that ecologically sound agriculture could not only successfully feed the world, but could arguably feed an even larger population without increasing the land dedicated to farm use.

Not surprisingly, the study showed that in developed countries, ecological practices generated a slightly smaller yield than conventional methods (92% as much). But in developing countries, they generated an astonishing 80% MORE food.

And contrary to popular opinion, leguminous cover crops really can fix enough nitrogen in the soil to eliminate the need for synthetic fertilizers.

We’ve already come so far in this movement. People everywhere are starting to wake up and ask questions about where their food comes from, how safe it is, or how ethically it was grown. But when people see the costs of “organic” foods at their grocery store (if it’s even available at their local supermarket), they take a step back.

But at what cost?

So, go read the article and tell me what you think.