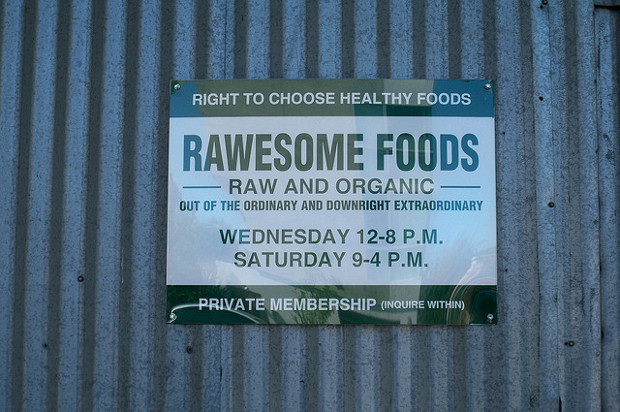 On the heels of the recent news about raw milk’s safety comes an alarmingly disturbing coordinated multi-agency raid on Rawesome Foods — a raw food buying co-op in Los Angeles. This morning’s SWAT-style raid was coordinated at both Rawesome Foods and Healthy Family Farms and has led to three arrests so far, the confiscation of personal computer equipment and raw milk cheeses, and the dumping of more than $10,000 worth of raw milk down the drain.

According to early reports from people on the scene, James Stewart (owner of Rawesome Foods), Sharon Palmer (of Healthy Family Farms), and Victoria Bloch (local L.A. co-chapter leader for the Weston A. Price foundation) have all been arrested on charges of conspiracy to sell unpasteurized milk products. 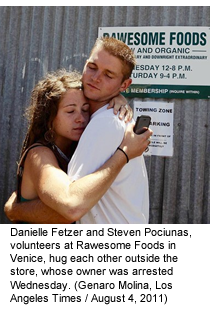 The raid was carried out by gun carrying officers of the LA County Sheriff’s Office, the FDA, the Dept. of Agriculture and the Centers for Disease Control.

According to Mike Adams, of Natural News:

James was followed from his private residence by law enforcement, and when he entered his store, the raid was launched.

James was handcuffed, was NEVER read his rights and was stuffed into an UNMARKED car. While agents said they would leave behind a warrant, no one has yet had any opportunity to even see if such a warrant exists or if it is a complete warrant.

Ann Marie Michaels, blogger at Cheeseslave and co-chapter leader of the L.A. Chapter of the Weston A. Price Foundation was on the scene and recorded this video:

I don’t know about you, but I can’t watch the video without being simultaneously outraged and brought to tears. This is America, folks. Where is our so-called freedom?

According to Dara Dubinet, a local member of the Rawesome Foods private co-op, officers on the scene informed her that the raid is happening not because of Rawesome Foods selling raw milk (retail sales of raw milk are legal in CA), but because they’re making other raw milk dairy products from the milk in the private buying club without the proper permits or certifications and “selling” both the products and the milk to consumers.

Please note that Rawesome Foods is a private co-op with a closed membership. Technically, they are not “selling” anything to the public, but rather coordinating the efforts of private members to buy and produce raw foods, including raw dairy. This is why they are operating without a license or the “appropriate” permits. They do not consider themselves a store that’s open to the public, but rather a private club.

Early reports indicated that Rawesome Foods owner James Stewart was being held on $123,000 bail, but subsequent reports have the figure at $23,000. In either case, you can donate to help James post bail here.

When I contacted the L.A. District Attorney’s office to ask for a comment, clarify what the express charges were, and ask about bail, I was told that they’d already issued a press release with all the relevant information. The press release is available online here.

According to the D.A.’s office:

Stewart runs the Venice market Rawesome, which has been in operation for more than six years but has never had any type of business permit or license, prosecutors allege. Stewart is facing 13 counts.

The investigation found that Healthy Family Farms and Rawesome customers were required to pay a membership fee of up to $50, or purchase a one-time “day pass” at Rawesome to purchase products there. Bloch reportedly informed undercover operatives that the membership payments and paperwork were needed for “legal” reasons, and they were not supposed to sell dairy products to nonmembers.

In a case cited in the 21-page complaint, an undercover investigator received goat milk, stored in a cooler in the back of Healthy Family Farms van, in the parking lot of a grocery store.

While it is lawful to manufacture and sell unpasteurized dairy products in California, applicable licenses and permits are required. These include regular veterinarian inspections of the animals and following equipment and sanitation requirements.

If you would like, you may call the L.A. District Attorney’s Office at 213-974-3512. They are accepting written comments, too, which you can mail to:

If you call or write, please be sure to ask how these agencies justify this raid as a valid expenditure of public funds, particularly when the CDC’s OWN DATA proves raw milk is safe!

I’ll keep you posted as the news unfolds by updating this post.

UPDATE 8/3/2011 6:15pm: There will be a formal public protest at tomorrow’s arraignment hearings. If you live in Los Angeles, show up on the morning of 8/4 at Los Angeles Superior Court, Criminal Justice Center, 210 W. Temple St., Los Angeles. Court opens at 8:30 a.m., so organizers are asking protesters to arrive at 7:45am.

UPDATE 8/3/2011 9:03pm: From a press release just issued by the Weston A Price Foundation, we find that matters are further complicated by the fact that members of the club also entered into a herdshare arrangement in which they paid a local farmer to board and milk their dairy goats. It looks as if the California authorities are denying the legal legitimacy of herdshare arrangements, insisting instead that such herdshares are unlicensed dairies. We also learned the exact bail amounts recommended for the three arrested individuals: “All three were charged with Section 182A-Conspiracy to Commit a Crime. Bond for James Stewart was set at $123,000. Bail for Bloch is recommended at $60,000. Bail for Palmer is recommended at $121,000.”

Besides participating in tomorrow morning’s rally and contacting the L.A. District Attorney, the Weston A Price Foundation is urging us all to take the following actions:

SUGGESTED TALKING POINTS
Talking Points for speaking with elected official about this issue:

UPDATE 8/3/2011 10:55pm: KTLA covers the raid on the 6 o’clock news! And guess what? It’s a balanced little piece. It even mentions the rally tomorrow morning. WATCH:

UPDATE 8/3/2011 11:51pm: Jenny at Nourished Kitchen found and shared the 21 page complaint that resulted in the warrant being issued against the three arrested today. You can read it in full here.