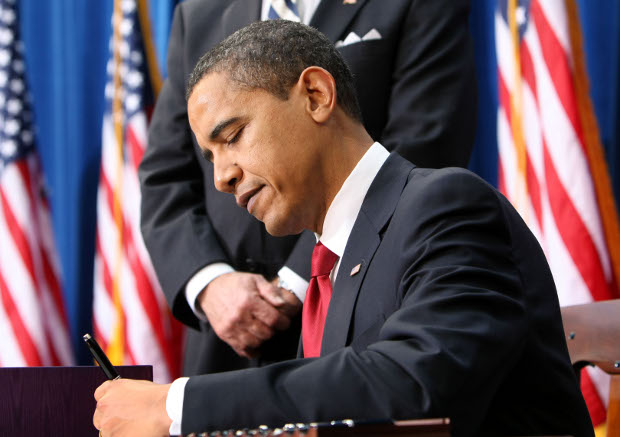 On Friday, March 16th, 2012, President Barack Obama signed an executive order that asserts his authority to take over all food resources in the nation so long as it is done “to promote the national defense under both emergency and non-emergency conditions.” Can that qualifying phrase be any more ambiguous?

Obama has claimed this authority for himself and all future Presidents based on the fact that the President is “Commander in Chief” of the U.S. military. Essentially, this means that should the President ever deem it a matter of national defense, the U.S. government can now forcibly claim control of all your privately held crops, seeds, farm equipment, and livestock.

Here’s the full text of the Executive Order. Perhaps the most pertinent parts to the discussion of food security are these:

Sec. 201. Priorities and Allocations Authorities. (a) The authority of the President conferred by section 101 of the Act, 50 U.S.C. App. 2071, to require acceptance and priority performance of contracts or orders (other than contracts of employment) to promote the national defense over performance of any other contracts or orders, and to allocate materials, services, and facilities as deemed necessary or appropriate to promote the national defense, is delegated to the following agency heads:

(2) the Secretary of Energy with respect to all forms of energy;

(3) the Secretary of Health and Human Services with respect to health resources;

(5) the Secretary of Defense with respect to water resources; and

(6) the Secretary of Commerce with respect to all other materials, services, and facilities, including construction materials.

(b) The Secretary of each agency delegated authority under subsection (a) of this section (resource departments) shall plan for and issue regulations to prioritize and allocate resources and establish standards and procedures by which the authority shall be used to promote the national defense, under both emergency and non-emergency conditions.

Sec. 801. Definitions. In addition to the definitions in section 702 of the Act, 50 U.S.C. App. 2152, the following definitions apply throughout this order:

(c) “Farm equipment” means equipment, machinery, and repair parts manufactured for use on farms in connection with the production or preparation for market use of food resources.

(d) “Fertilizer” means any product or combination of products that contain one or more of the elements nitrogen, phosphorus, and potassium for use as a plant nutrient.

(e) “Food resources” means all commodities and products, (simple, mixed, or compound), or complements to such commodities or products, that are capable of being ingested by either human beings or animals, irrespective of other uses to which such commodities or products may be put, at all stages of processing from the raw commodity to the products thereof in vendible form for human or animal consumption. “Food resources” also means potable water packaged in commercially marketable containers, all starches, sugars, vegetable and animal or marine fats and oils, seed, cotton, hemp, and flax fiber, but does not mean any such material after it loses its identity as an agricultural commodity or agricultural product.

(f) “Food resource facilities” means plants, machinery, vehicles (including on farm), and other facilities required for the production, processing, distribution, and storage (including cold storage) of food resources, and for the domestic distribution of farm equipment and fertilizer (excluding transportation thereof).

The language is quite far-reaching while being stunningly precise.

So, what is an Executive Order?

The first president to use an Executive Order was George Washington. His order was about his household expenses, which were being remanded to the U.S. Treasury for payment.

At their root, these orders were created as a way for presidents to execute the laws passed by Congress. They served as directives to the different government agencies responsible for implementing particular laws.

I would think so. At least, that is, until President Woodrow Wilson actually used an Executive Order to create a law in 1916. He called it an “emergency measure” and asked Congress to validate it, which they later did.

Since then, Presidents have increasingly used Executive Orders to actually make laws, completely bypassing the proper, Constitutional role of Congress.

Should you be concerned?

Here’s the deal. There are now thousands of these Executive Orders on the books. They’ve been written by Presidents of both parties, each one building on and giving the executive branch (i.e. the President) more power than is Constitutionally permissible. Reading them is like reading about how Mao or Hitler came to power.

There are Executive Orders on the books that allow the government to:

The part of me that’s prone to alarmist reactions wants to either flee to the hills or stick my head in the sand.

The good news is that the vast majority of these self-given, sweeping powers have never actually been implemented. Many of these self-appointed powers have been on the books as Executive Orders for at least 60 years in one form or another, and we have yet to have a President laugh maniacally while saying, “Aha! Now I’ll do what’s best for you and claim dictatorial control of absolutely EVERYTHING in the name of national defense.”

Basically, I’m pinning my hopes on the American people to continue to govern themselves and act in freedom even if their legislators or other governing bodies don’t want them to. Remember how last year that food buying club in Kentucky chose to IGNORE the Kentucky Department of Health’s so-called “quarantine” on their raw milk, and won?

Freedom is something we give ourselves, by choosing to act in liberty in the day-to-day minutiae of our lives. Sometimes, we have to fight for it by opposing particularly egregious legislation or standing up to over-zealous regulators. We may even have to go to jail for it through acts of civil disobedience. One day, we may even be called upon to die for it, and hopefully we’ll act according to conscience and do the right thing.