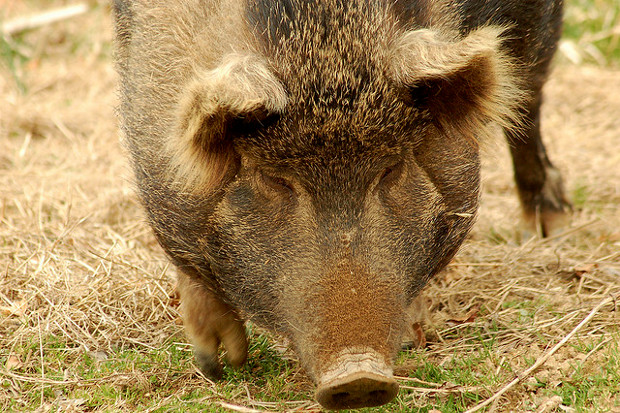 In a brazen power grab threatening small farmers, the Michigan Department of Natural Resources (DNR) is using the state Invasive Species Act to expand its jurisdiction beyond hunting and fishing to farming operations. Their controversial Invasive Species Order (ISO) prohibits certain pigs the agency deems “feral.” Based on the way the state is enforcing the rule, even domesticated pigs under human husbandry are suspect. Farmers, ranchers and game preserves with successful small businesses are now threatened with economic and criminal sanctions, based on the physical characteristics of their swine.

Implementation of the ISO, as of April 1st, not only takes private property without compensation it also denies farmers of fundamental private property rights and the right to make a living. It will reduce or eliminate customer access to heritage breed pork, a product that has become increasingly popular with health conscious consumers and restaurants across the state.

The ISO allows DNR to seize and destroy pigs raised by Michigan farmers; Michigan DNR has publicly stated they will not compensate farmers whose pigs are destroyed. Possession of prohibited swine after April 1, 2012 is a felony with penalties of up to two years in jail and $20,000 in fines.

Attorney Joseph O’Leary is suing the DNR on behalf of four of the aggrieved business owners. He explains, “Wildlife is owned by the state; it is the role of the DNR to regulate and control state property. Livestock on farms is privately owned and properly belongs in the jurisdiction of the Department of Agriculture. When a governmental agency blurs these lines, people had better wake up and take notice because at that point we are all in a lot of trouble.”

Game preserve owner, Greg Johnson, reports that these special interest groups find it easier to get their way by pressuring state employees, rather than representatives elected by the people. “The DNR is waging a propaganda campaign of outright lies, which has already driven many farmers out of business. We are not swimming in feral swine–there is no feral hog problem in Michigan.” Johnson reports his business has already dropped in half as a result of the state led smear effort, and the three dozen or so private hunting preserves have dwindled down to a handful.

The Michigan Pork Producers Association and other large agribusiness interests, as well as conservation groups have worked together with the DNR to push for the ruling to be implemented. For the factory pork breeders, this is about eliminating the competition. The ISO ensures consumers will only have the choice of pork raised in confinement, known as confined animal feeding operations (CAFOs).

For more than a decade, the Michigan Department of Natural Resources has worked politically to drive private hunting preserves out of business. However, the Michigan state legislature repeatedly rebuffed their attempts. Elected officials recognize how important private property rights are, and they were unwilling to prohibit landowners to raise and harvest animals in open areas. Now, backed by large Agribusiness interests in the state, DNR has done an end run around participatory democracy and declared swine with certain characteristics “feral” which not only includes animals raised at hunting preserves but thousands of other small farms across the state.

“The DNR has strayed into the unfamiliar territory of agriculture regulation. Given the nebulous and open ended description by which pigs are targeted, farmers fear for their futures,” says Pete Kennedy, Esq., President of the Farm-to-Consumer Legal Defense Fund.

In it, you’ll hear from one of the many small farms affected by this new rule:

Isn’t it interesting that according to the state of Michigan, the very pigs that are now outlawed are also the only pigs that could actually survive being raised outdoors in a free-range environment?

In other words, the state now only supports the raising of pigs in captivity!

What Can You Do?

Michigan Governor Rick Snyder has the power to rescind the order. People need to call, fax or email the governor demanding that he immediately rescind this unconstitutional ISO. Below are suggested talking point.

1. DNR needs to stay off farms
2. DNR needs to repeal the Invasive Species Order to not include ALL swine that are under the husbandry of humans no matter how they are raised.
3. The order denies consumers their rights to access foods of their choice.
4. The order violates farmers’ property rights and the right to make a living.

The text of this post is derived from a press release issued by an agency I wholeheartedly support (and of which I am a member), the Farm-to-Consumer Legal Defense Fund. The Fund defends the rights and broadens the freedoms of family farms and protects consumer access to raw milk and nutrient-dense foods. Concerned citizens can support the FTCLDF, a U.S. based 501(c)(4) nonprofit, by joining or donating online at www.farmtoconsumer.org or by calling 703-208-FARM (3276).

For more information go to www.farmtoconsumer.org/michigan-swine-iso.htm

Leave a Reply to Be Cancel reply