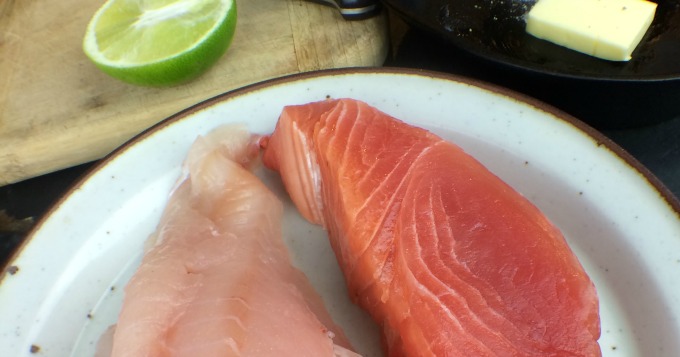 There is a climate of distrust toward seafood these days. Many feel uncertain as to the safety of fish in general, not to mention which fish specifically are safe, if any.

How do you sort through the news, recommendations and warnings to know what to purchase? Is seafood even a necessary part of our diet? I’d love to answer these questions and more. Let’s explore the sea of issues surrounding seafood consumption: mercury, radiation exposure, aquaculture practices and fisheries.

IS SEAFOOD NECESSARY IN A HEALTHY DIET?

Seafood belongs to a varied, nutrient-dense diet. Fish and crustaceans are an excellent source of good cholesterol, omega-3 fatty acids, vitamins A, D, B12 and folate.

Fish canned with their bones, such as sardines and salmon, can be an effective means of supplementing calcium.

Regular intake of fish has been linked to optimum brain health and development, reduced incidents of cancer, healthy blood pressure levels, low levels of inflammation and much more.

While many avoid fish for fear of consuming mercury, a heavy metal that damages the nervous system, brain and digestive mechanism, fish also contain high levels of selenium, a mineral we now know is not only essential for thyroid, immune, nervous system and brain health, but is also the key to nullifying the effect mercury can have on humans.

It is not the presence of mercury in fish that is the concern. We must understand the context in which a single entity exists. Mercury binds to selenium and is excreted from the body as a result. If there is more selenium than mercury in a fish the mercury will be excreted.

Given this information, the main “fish” to avoid are actually whales, sharks, swordfish, tilefish, and king mackerel.  Notice tuna is not on the list.  It has a higher ratio of selenium to mercury, by a lot, and is actually recommended as a healthful choice.

What about seafood being contaminated by radionuclides from the Japanese power plant incident? March 11, 2015 marked 4 years since the Japanese tsunami killed 19,000 people and leaked radiation into the Pacific Ocean. During that 4-year period we’ve heard reports of predictable fish contamination. One tuna was found off the coast of California with low levels of radiation, in 2013.

How are things looking now, two years after that fish was found, so far from its native waters? Levels had dropped so significantly between 2011 and 2013 that very few tests have continued. Yet a popular quote in the understandable hysteria that followed this leak was, “There is no safe level of radiation exposure.”

While this is true in one sense, and I don’t plan to eat fish or seaweed from the coastal waters of Japan, the exposure any of us would experience from eating the fish found in 2013 has been compared to one set of dental x-rays or a single airport screening. And that fish was an isolated incident.

The fact is radiation is all around us, impossible not to be exposed to in our modern world. While we certainly don’t want to add to that exposure what are some things we can do to combat our continual exposure? 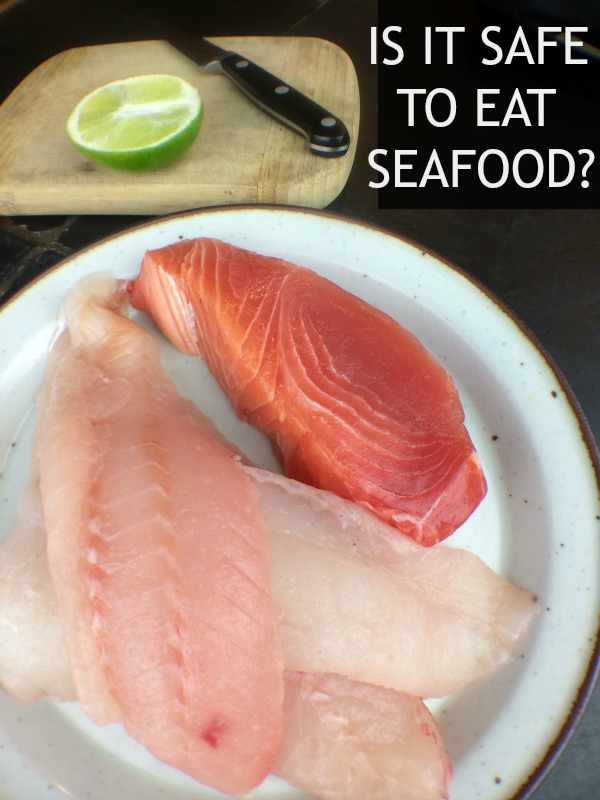 What about farm-raised seafood, is it safe?  Yes and no.

While it would be easy to assume that all farmed fish is as unsafe as tilapia, for instance, thankfully the fish farmers of the world are more diverse than that.

There are many reasons to avoid farm-raised tilapia: they are treated with pesticides to kill water lice (and pesticides are then released into the ocean). They are treated with antibiotics due to sickness in their cramped quarters. A large ratio of their feed is animal feces, ground-up small fish and the greatest percentage of it is corn. They are fatter due to their corn-based diet and sedentary lifestyle and are therefore high in omega-6 fats and very low in omega-3. Tilapia is considered a truly dangerous food for those struggling with heart disease or inflammation of any kind.

Farm-raised catfish, salmon and shrimp are raised under similar circumstances and should also be avoided.

There are, however, honorable aquaculture (fish farming) facilities. I discuss below organizations that help us, as consumers, to make informed decisions.

As a consumer, is there an eco-conscious shrimp safe to buy and eat?

Domestic, wild shrimp are a good choice. Look for the following certifications from independent agencies: Marine Stewardship Council, Wild American Shrimp, or look for the Best Aquaculture Practices label, which is a very stringent stamp for farmed shrimp that are antibiotic-free and actually exceed environmental standards.

According to the Environmental Working Group,

Farm-raised fish are here to stay. If raised correctly, these fish can help meet global demand for high-quality protein and take some of the pressure off of highly depleted populations of wild fish. But major reforms to the industry are needed.

We often think in terms of land animals when we discuss endangered species. But there are fish, too, that are over-harvested, due to popularity and the increased human population. Some of these to be mindful of include Atlantic halibut and certain varieties of tuna.

Consumer watch groups help consumers understand healthful choices when it comes to this issue, as well as knowing what seafood does not include bycatch (the capture of other marine animals) or endanger sensitive habitats.

The term fishery embodies all these issues: the activities involved in catching seafood.

What’s one of the most powerful ways you, the consumer, can support responsible fisheries?

The ocean is full of a vast variety of not only edible but delicious and healthful seafood. We too often attach stigma to certain fish, either positive or negative. But to decrease the demand on over-fished or unsustainably-fished species, look for ocean or eco-friendly offerings that may not be as familiar.

You can find comprehensive links and guides to making wise choices when buying seafood HERE. You may also want to read Healthy Seafood: What to Buy.

According to the Monterey Bay Aquarium Seafood Watch these are some examples of good choices: wild salmon, wild or farmed Arctic char, farmed trout, sardines and anchovies.

Sardines (Pacific, wild-caught) are one of the healthiest foods we can consume, according to health and environmental experts. These nutritional powerhouses are one of the best sources of omega-3 fats, with a whopping 1,950 mg/per 3 oz. (that’s more per serving than salmon, tuna or just about any other food) and they’re packed with vitamin D.

Not sure how to prepare them? Here’s a main dish, gourmet salad recipe made with sardines.

Also look for skipjack tuna (FAD-free, troll or pole gear), all varieties of tuna labeled “Best Choice” by the Seafood Watch. They offer the greatest amount of selenium in any fish.

There is one extremely easy, nutritious food made from skipjack alone. Bonito fish flakes! (Where to buy Bonito Fish Flakes)

Megan loves children's books, seaside vacations and easy gourmet cooking. Her first cookbook, EAT BEAUTIFUL: Grain-free, Sugar-Free & Loving It, is a #1 New Release on Amazon! She happily lives on 10 acres of blackberries, grapes and weeds with her hubby and three kids. Megan also owns a Paleo/gut-healing cafe where she loves serving up healing foods like bone broth and honey-sweetened grass-fed ice cream!