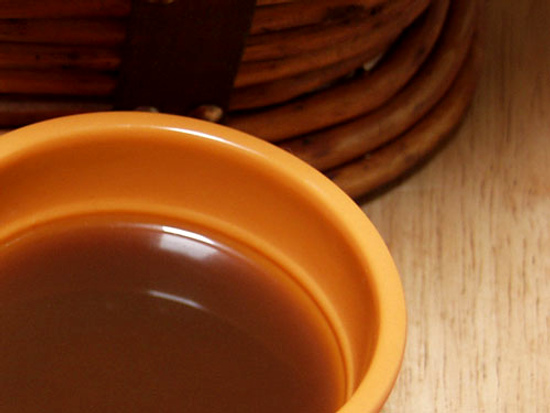 Now that I’ve rambled about how a good broth can help us adjust our palette away from the Standard American Diet towards Real Food, as well as given a bit of the culinary history of broth and it’s nutritional benefit, I figured it was time to talk about how to make beef broth.

Making broth is surprisingly simple. If you search online, you’ll find a great many recipes out there for how to make beef broth. What you need to know is this: broth can be as simple or as complicated as you want it to be, depending on your goals.

How To Make Beef Broth

Start with cow bones. Any bones will do.

Now, some folks will vilify me for this. After all, the kind of bone you use will determine the nutrient-density of the broth as well as the flavor. For the most nutrient-dense and flavorful broth, you want meaty bones with thick marrow (sometimes marketed as “soup bones” by butchers) mixed in with some cut up hooves, knuckles, or skull.

The hooves, knuckles, and skull will help produce the most gelatin-rich broth that’s full of other good stuff for your joints (like glucosamine and chondroitin). The meaty bones will produce the hearty flavor you love in a good beef broth. But the truth is, just about any bones will provide a lot of healthful minerals (like calcium, magnesium, phosphorous, etc.). So, even if you can’t get your hands on these super nutrient-dense or flavorful bones, don’t fret!

Put the meaty bones in a roasting pan in a 350 degree oven until brown. The roasting will create the irresistible flavor and color you expect in a good broth. If you’re using the meaty bones from a roast you’ve already cooked (like a shoulder roast), then feel free to skip this step. Those bones have already experienced the flavor-inducing Maillard reaction necessary for a good broth.

Bring the pot to a boil on the stove top, then reduce heat to maintain a gentle simmer. Eventually, scum will start rising to the top of the broth. Gently scoop this off and discard it. The rising scum contains many unsavory things, and your broth will be prettier and taste better without it.

Let boil for at least 24 hours, adding water as needed. The larger the animal, the longer you’ll want to cook the broth to get the most nutrients out of the bones. With an animal as large as a cow, that means a full day! With an animal as small as a chicken, you can probably get away with 6-8 hours. Fish only need a couple of hours.

If you want to, add vegetables and salt a few hours before you finish. I never cut up fresh vegetables to add to broth. If I have scraps on hand, or vegetables that need a quick end because they’re “starting to turn,” then I use them. If not, I don’t fret. I always add salt to my broths. That’s just a preference of mine. You may choose to do otherwise.

When finished, let the broth cool to room temperature, pick out the large bones, then strain the broth through a wire mesh strainer. Optionally, after the broth is strained you can “condense” it by pouring the strained broth back into your pot and bringing it to a boil to let it reduce further. If using the broth right away (as in a soup), I don’t condense it. If making it to use in later culinary delights, then I do. Again, it’s just a preference. You do what works for you!

Let the broth cool further in a refrigerator or otherwise cold place. After it’s cooled completely, skim the fat off the top and save it for later. That fat is a tasty beef tallow, and you can use it in cooking later. If you don’t want to do this step and *want* an oily broth, then skip it. It won’t hurt anything, but it may make using the broth in some recipes difficult later.

I store condensed broth two ways: first in quart sized freezer storage bags that can lay flat in my freezer. And second, in ice cube trays! The ice cubes of condensed broth are handy for when I just need a smidgen of flavor added to something (steamed rice, veggies, etc.).

How To Use Beef Broth

Now that know how to make beef broth, you’ll want to know how to use it. Here’s my list of favorites:

Over the next little while, I’ll be posting some of my favorite recipes made using beef broth. Any votes on which ones you’re dying for me to share?

What if I don’t have the time to make beef broth?

You can buy “homemade” beef broth from those using the bones of grass-fed cattle online! It’s shipped frozen and tastes divine.

(Where to buy beef broth.)