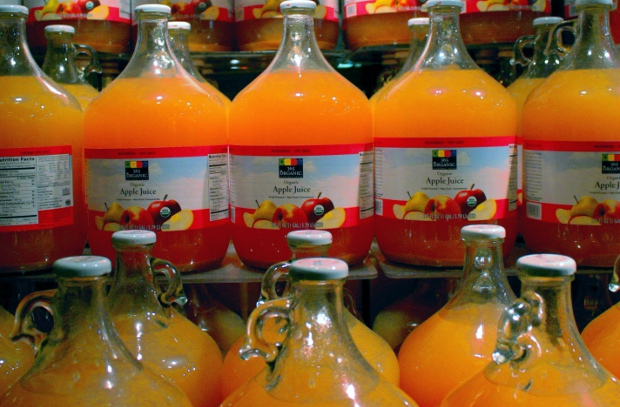 A few months ago, when Dr. Oz announced he’d found high levels of arsenic in various kinds of commercially available fruit juice, he was roundly criticized for fear mongering. After all, his findings hadn’t been confirmed — until last week. Consumers Union, the group that publishes Consumer Reports, conducted its own test on 88 juice samples from popular grocery store brands. A shocking 10% contained levels of arsenic higher than those permitted in drinking water.

Why am I not surprised?

We really can’t trust the industrialized food system to “keep us safe.” If anything, food produced within this system is even more dangerous. It’s far too easily contaminated and produced on too large a scale.

So, perhaps more relevant to me than the knowledge that juice we don’t drink is contaminated with high levels of arsenic is what the Juice Products Association said in its response to the study:

But what about the vast majority of children who consume juice?

About 35 percent of children 5 and younger drink more juice than pediatricians recommend. “Kids are known to consume more juice per pound of body weight than adults,” Dr. Jerome Paulson, chairman of the American Academy of Pediatrics council on environmental health, tells The Salt. “So, if you’re going to set a standard, you have to consider their health.” (source)

Setting a standard for arsenic levels safe enough for children is just what the Consumers Union is proposing after publishing their findings.

The organization recommends that federal standards be set at 3 ppb for arsenic and 5 ppb for lead. Using these levels, 59 percent of the samples tested would not be safe to drink.

“We calculated that level so that if a child drank 4 to 6 ounces of juice daily, they would be under the daily limit of arsenic intake,” Michael Hansen, senior scientist at Consumers Union, tells The Salt. “It would give them a one in 1000 risk for skin, bladder and lung cancer.” (source)

So, if we are to follow the reasoning of the Juice Products Association, we shouldn’t worry about arsenic in juice because people don’t drink enough juice for it to matter. The standards are too high, they say.

But according to Consumers Union, children drink far more juice than they’re supposed to, and even when drinking it at levels pediatricians recommend (4-6 oz daily) the arsenic levels are enough that 59% of the juice samples are unsafe. The standards are too low, they say.

Why is the Juice Products Association even arguing with this?

Why are they fighting to keep standards which put children at increased risk for cancer? Are they really that heartless?

Let me tell you a story.

My husband is a roofing contractor. Not long ago, he had a conversation with one of his customers that went something like this:

Husband: So, if you don’t mind my asking, what do you do for a living?
Customer: Oh, well a lot of people cringe when I tell them.
Husband: My curiosity is piqued. What is it? How can it be that bad?
Customer: I’m a lobbyist. BUT I’m THE GOOD KIND.
Husband: Well, I understand the need for lobbyists. What is it you lobby for?
Customer: I help feed the world. I work for Monsanto. We develop seeds and agricultural products that make it easier and cheaper to grow more food.

That man — the lobbyist for Monsanto — was a face for the corporation, a heart intent on good who honestly believed his company’s hype. He had a wife. Kids. Pets. A meaningful job. He went to church, probably paid his taxes on time, and obviously patronized local businesses.

Individual people working within behemoth corporations may have hearts. They may actually care that children in Africa are starving, or that children right here in America are being poisoned by arsenic.

What does this mean for us?

It means that corporations are organizations which, by their very nature, MUST prioritize profit above all else since that’s what being incorporated is about (making money for shareholders who’ve invested in a company). It means that the people who invest in corporations aren’t legally liable for the corporation’s mistakes.

In other words, there’s virtually no accountability for corporations, no reason for them to check themselves — other than those things which affect their bottom line.

Do you think the arsenic levels found in fruit juice will affect the corporations which have joined together to form the Juice Products Association? Do you think that concerned moms are actually going to stop buying their children juice? In large enough force to affect the profits of these food industry behemoths?

Yet again we get to the heart of the issue. You can not trust industrialized food, period.

Can I say it again? You can’t trust industrialized food, period.