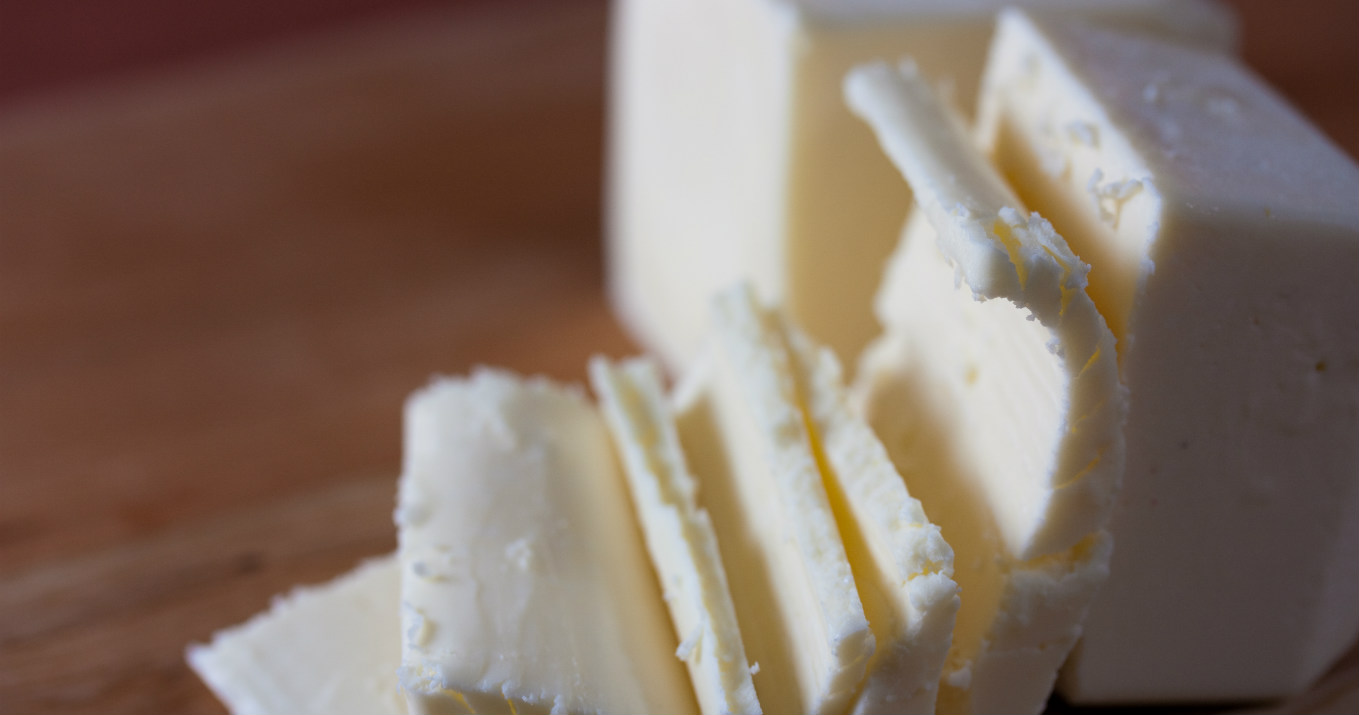 It’s no secret that I’m a fan of butter. I love the way it tastes. I love the way it makes other foods taste. I love the way it melts, the rich creamy texture it imparts to delectable recipes, and I love that it is REAL. If I wanted to, I could put a cow out to lush, green pastures every day, milk it, and use my haul to create fresh butter in my own kitchen. I can’t create margarine in my kitchen.

Butter from grass-fed cows is arguably one of the best kinds of fats we can eat, but when you tell most people this they roll their eyes. Where’s the science to back that claim up? They ask. Everyone knows butter is bad, bad, bad for you. Don’t they?

Ah. Well now you can point them to a recent study which broke down the results of the 20 year Framingham Heart study, specifically comparing butter consumption to margarine consumption. Guess which tasty, spreadable fat wins?

From Stephen at Whole Health Source:

The really cool thing about this study is they also tracked butter consumption. So it’s really a no-holds barred showdown between the two fats. Here’s a graph of the overall results, by teaspoons of butter or margarine eaten per day: 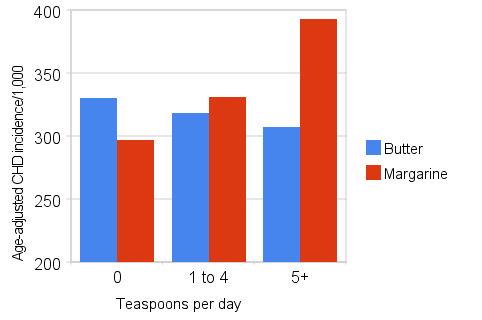 It gets better. Let’s have a look at some of the participant characteristics, broken down by margarine consumption: 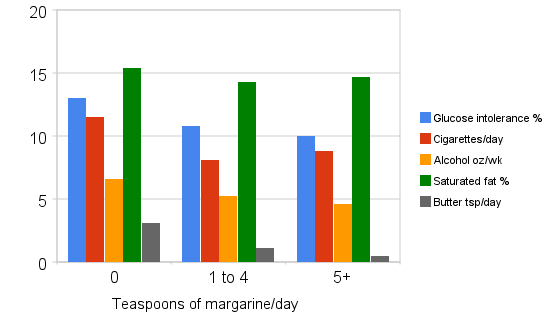 People who ate the least margarine had the highest prevalence of glucose intolerance (pre-diabetes), smoked the most cigarettes, drank the most alcohol, and ate the most saturated fat and butter. These were the people who cared the least about their health. Yet they had the fewest heart attacks. Imagine that. The investigators corrected for the factors listed above in their assessment of the contribution of margarine to disease risk, however, the fact remains that the group eating the least margarine was the least health conscious. This affects disease risk in many ways, measurable or not. I’ve written about that before, here and here.

Can this study get any better? Yes it can. The investigators broke down the data into two halves: the first ten years, and the second ten. In the first ten years, there was no significant association between margarine intake and heart attack incidence. In the second ten, the group eating the most margarine had 77% more heart attacks than the group eating none: 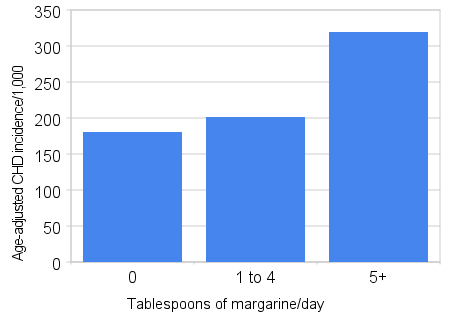 So it appears that margarine takes a while to work its magic.

They didn’t publish a breakdown of heart attack incidence with butter consumption over the two periods. Perhaps they didn’t like what they saw when they crunched the numbers. I find it really incredible that we’re told to avoid dairy fat with data like these floating around. The Framingham study is first-rate epidemiology. It fits in perfectly with most other observational studies showing that full-fat dairy intake is not associated with heart attack and stroke risk. In fact, several studies have indicated that people who eat the most full-fat dairy have the lowest risk of heart attack and stroke.

It’s worth mentioning that this study was conducted from the late 1960s until the late 1980s. Artificial trans fat labeling laws were still decades away in the U.S., and margarine contained more trans fat than it does today. Currently, margarine can contain up to 0.5 grams of trans fat per serving and still be labeled “0 g trans fat” in the U.S. The high trans fat content of the older margarines probably had something to do with the result of this study.

So, go eat your butter!

Leave a Reply to Denise McLaurin via Facebook Cancel reply