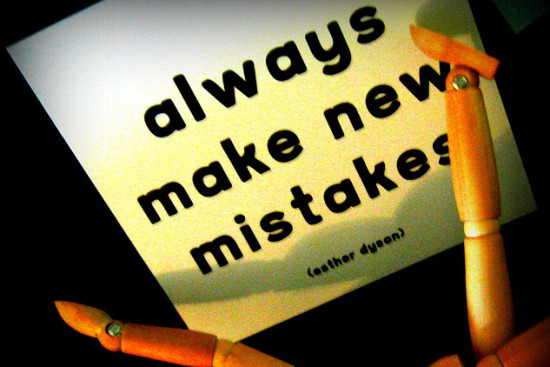 We’ve all been there. There’s always a learning curve whenever you’re trying out something new. But sometimes it would be real nice if that learning curve weren’t so steep. If, instead, you could simply learn from other people’s mistakes.

Today I invited Kelly the Kitchen Kop to share her Top 5 Mistakes she made as a Real Food Rookie.

Hi, Kelly! Thanks for taking the time to answer these questions. Let’s start by setting the stage. How did you first get interested in Real Food?

It was after I began the South Beach Diet over 6 years ago and a friend suggested it might not be the best way to lose weight.  She directed me to the Weston Price site and my life has never been the same!

What are the five biggest mistakes you made when switching to Real Food that you’d like to help others avoid?

1.  I wasn’t real sure at first about the whole “healthy fat” thing and it took me a bit to totally jump on board.  I questioned why I wasn’t hearing this from my doctors and figured that surely there was a reason they were still gung-ho about low-fat everything.  Soon common sense won out.  What fats have we been eating for thousands of years?  (Butter, lard, tallow, coconut oil.)  And what fats have we been eating since people started getting more and more sick and overweight?  (Modern, super processed oils like soybean, canola, safflower, along with trans fats, etc.)

2.  I didn’t keep my mouth closed enough when around my family, and my bulldozer opinions caused some to not dare ask me anything again, or not for a while anyway.  I wish I had chilled out a little and let them ask questions when they were ready.  That’s not easy to do when you know the people you love could feel better if they’d only _____ (fill in the blank).

3.  I went out and got huge jugs of Agave Nectar when I read that it was a “natural sweetener with a low glycemic index”.  I soon found out more, and an article by Sally Fallon Morell said that it is highly processed and should be called, “High fructose Agave Syrup” due to it’s high fructose content, the worst kind of sugar for our health.  Now I know which truly natural sugars work best in which recipes, and I’ll share that in the class.  🙂

4.  We once bought a quarter of a cow (that’s a LOT of meat, trust me) from a place where we ended up not caring for the taste of their meat.  (That happens sometimes, depending on where the cows roam & what they’re fed.)  I’m glad we didn’t give up on pastured meats, we’ve now found delicious meat from a place we love (some local and some online).

5.  Early on I put the focus too much on getting the bad stuff out (buying organic for example, when often that was just another processed food), and not enough on getting the good stuff in (like fermented foods, cod liver oil, bone broth, etc.)

I don’t know about the rest of you, but I can identify with these mistakes (particularly that last one). How many of you or the people you know, for example, wanted to take control of their health and began by switching to low-fat dairy, or eliminated sugar in favor of fake-food alternatives like Splenda?

So, Kelly, tell us why you created this e-course.

To answer that, first I’ll tell you why I began my blog.  It was when friends were all asking me the same questions about Real Food and I wanted one place to send them for the information I found in all my research.  Fast forward almost 3 years and there’s a lot of information on the blog – it can be overwhelming, so this course breaks all that down into a crash course over 12 weeks where you’ll learn all that it took me years to figure out.  🙂

To find out more details about Kelly’s Real Food For Rookies E-Course, click here. You won’t regret it!

Leave a Reply to Laura Timbrook via Facebook Cancel reply